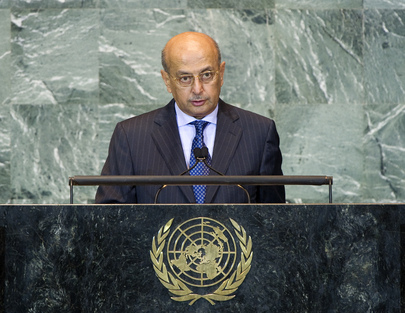 ABUBAKR A. AL-QIRBI, Minister for Foreign Affairs of Yemen, said his country had been experiencing an acute political crisis since January. The political opposition had decided to reject the principle of consensus after failing in elections, as democratic means would not allow it to seize power. That violence threatened to become a civil war, undermining the achievements of the modern Yemeni people. At the beginning of the 1990s, Yemen had established a unified state based on pluralistic, democratic foundations. But, those who focused on narrow, partisan interests did not approve of that historic achievement and tried to start a commotion, using as their basis errors made in Yemen at the beginning of the establishment of its unified State.

Unbridled population growth, prevalence of poverty, desertification and paucity of oil had combined to create an environment in which it was impossible for thousands of university graduates to find employment. But, opposition powers used the tidal wave of change in Arab countries to prevent Yemen from achieving democratic change through elections; the Government had started dialogue with youth to respond to their requests and created tens of thousands of jobs to alleviate unemployment. “However the opposition parties abused and misused the vigils by youth in order to seize power, and some of their elements conducted subversive actions to sabotage the movement of the youth,” he said.

Yemen’s President had offered compromise to the opposition who had refused to endorse the 2006 election, leading to the postponement of parliamentary elections for two years. He had assured that he had no intention running for President again and had accepted modifications to the Constitution, election laws and a whole package of reform. The country had experienced losses of more than $2 billion from the chaos caused by the opposition, which had tried to cut through roads, explode oil pipelines and cut electricity lines.

Yet, he said, the Government continued to call the opposition to the table to start dialogue. Divisions in Yemen would only be overcome by a return to the legality of the constitution and fixing its shortcomings. A smooth transition of power would allow reconciliation, reform and reconstruction without violating democratic principles. Yemen would provide a model for change in which all parties would be winners — an example of a country that opted for dialogue as a means to overcome crisis.

Despite limited resources, the Government continued to make every effort to fight Al Qaeda; it needed a comprehensive counter-terrorism strategy that strived to achieve international justice. Yemen attached primary importance to human rights and welcomed the result of the universal periodic review conducted by the Human Rights Council. In Yemen’s political crisis, there had been many violations of human rights by all parties. Nevertheless, the Government was ready to conduct independent national investigations and bring the perpetrators to justice, as well as open its doors to the Human Rights Council’s fact finding mission this year.