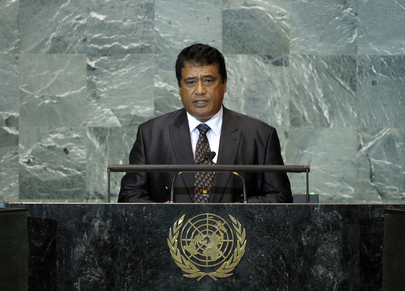 LORD TU’IVAKANO, Prime Minister and Minister for Foreign Affairs of Tonga, addressing a host of issues, said that non-communicable diseases in small States threatened livelihoods and gains made in pursuit of the Millennium Development Goals. He was pleased that the Secretary-General had visited a number of countries in the region on his way to the Pacific Islands Forum, assessing the impacts of climate change and validating the activities of Pacific small island developing States, like Tonga, in international forums. Urging countries to embrace the promise of the Seventeenth Conference of Parties to the United Nations Framework Convention on Climate Change, he said he was pleased that the Security Council in July had seized the moral imperative by holding an open debate on the impact of climate change. The Council must continue to lead on that issue.

Stressing the importance of conserving marine resources as an income generator, he said it was vital to ensure that countries like Tonga enjoyed a greater share of benefits derived from those resources. He also noted this year’s consensus decision by States parties to the United Nations Convention on the Law of the Sea relating to the workload of the Commission on the Limits of the Continental Shelf, whose work Tonga valued. He repeated the call for creating a formal small island developing States’ category within the United Nations system, which addressed the diversity of size, population and remoteness of each country.

Welcoming South Sudan as the newest United Nations Member, he said Tonga had long supported efforts to find a comprehensive, just and enduring peace in the Middle East. This was a moment of truth for those with genuine hope for a secure Israel and viable Palestine. Recalling that he was addressing the Assembly as Tonga’s first democratically elected Prime Minister, he said he had taken office following a process of principal reforms that included the peaceful transfer of Executive power from His Majesty in Privy Council to the Government. In sum, he said that to address an uncertain future, his Government had approved the Tonga Strategic Development Framework, which would guide efforts over the next four years and included nine priority areas. He reaffirmed Tonga’s commitment to the United Nations and pledged support to its ongoing reform.