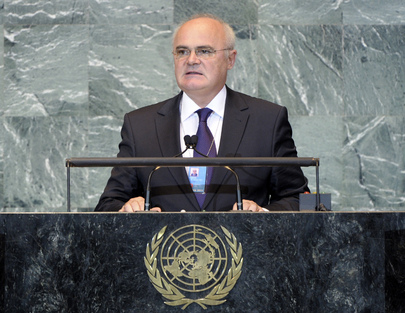 DORU COSTEA, State Secretary of Global Affairs of Romania, said that protracted conflicts in Eastern Europe continued to demand the undivided attention of the international community, and he reiterated the importance of remaining involved in handling those conflicts with a view to reaching peaceful solutions, within the existing regulatory frameworks. He welcomed the opening of dialogue between Belgrade and Pristina, facilitated by the European Union following the resolution of the General Assembly in 2010, and reiterated the central role of the United Nations and the framework of Security Council resolution 1244 (1999). Romania supported the Geneva talks, co-chaired by the United Nations, European Union and Organization for Security and Cooperation in Europe on the situation in Abkhazia and South Ossetia. Progress on the humanitarian track should not be held hostage to political setbacks and called for urgent solutions. Regarding Afghanistan, he said progress was being made in the gradual takeover of responsibility by the Afghan authorities in the fields of security, reconstruction and socio-economic development. He welcomed the steps being taken by the Afghan Administration for national reconciliation, and trusted that a rigid framework would not be set up, but rather be tailored to particular realities and conditions required for the normal functioning of the Afghan society. Progress in Afghanistan also depended on the efforts of the authorities in Kabul and the continued commitment of the international community. Last year in Bucharest, an international workshop had been convened on electoral and political matters pertaining to democratic transition, organized in part by Romania. It had been attended by more than 40 participants, from Egypt and Tunisia, representatives of public institutions involved in organizing the elections, representatives of the media, civil society and academic circles, and by Romanian and international experts. The seminar focused on sharing experiences on first electoral cycles in post-authoritarian regimes, as founding moments for a new democratic society through credible, transparent and free elections. In times of crisis, options were limited, he said. The international community could dwell in endless debates on “what should have been done” and “what might have been”, but now was not the time for such debates. Reforms were needed that observed comprehensively good governance principles, human rights and fundamental freedoms, as well as the wise use of available resources. That was the only option — a country without equal and dignified citizens could never be rich.