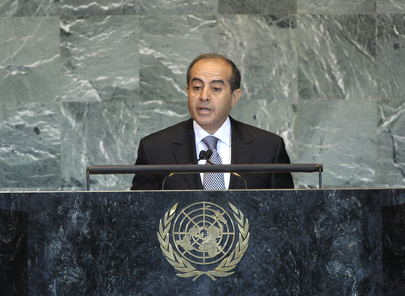 MAHMOUD JIBRIL, Chairman of the National Transitional Council Executive Office of Libya, lamented the loss of more than 30,000 Libyan martyrs whose “sacred blood” was shed to write a new history for the new Libya. “I bow to those mothers who today know that their sons’ sacrifice was just and right,” he said. Two years ago, Muammar al-Qadhafi stood before the Assembly and tore up the Charter in a “pathetic theatrical move” that flouted international values. “Today, I stand before you to show the world that a new Libya is coming to life,” he said. He spoke of a forward-looking country keen on healing, rebuilding and beginning a new, prosperous chapter based on non-discrimination. Mr. Qadhafi had built a State that had the worst educational and health systems in the region. Today, poverty stood at 20 per cent and youth unemployment at more than 30 per cent. But on 17 February, Libyan youth began to open a new page in the country’s history, which was to be written by all of Libya’s people. Friendly sister States responded to the vision set forth by Libyans working to end injustice. The United Nations and regional organizations were instrumental in protecting civilians and preventing the Qadhafi regime from doing even greater harm.

Libya, however, was a “land not yet fully liberated”, he said. It grappled with widespread infrastructure destruction, including more than 63 ruined schools, more than 50,000 injured people and more than 1,700 amputees awaiting help. Its social fabric had been torn by Mr. Qadhafi, who pitted tribes and regions against each other. Oil must be pumped and oil export production resumed. “We need more help,” he said, stressing the urgency of mass-scale institution building in a nation deprived of any real institutions or laws for over 50 years. Libya’s people and the world had great social and political expectations. Everyone must consider the colossal task ahead of ensuring respect for human rights and foreign workers, building institutions at the required speed, achieving national reconciliation, ending militarization of streets and towns, and maintaining unity.

Achieving national unity and reconciliation was an important early demand, he said. It was very important to put a draft Constitution to a referendum. “The asset freeze on our funds must be lifted as soon as possible,” he said, imploring the Council to lift that freeze. “We want the help of the United Nations, the help of friends, without conditions,” he said. He envisioned Libya as a law-abiding State and an “oasis for human development in the Middle East”. Due to its geography, history and geo-strategic importance, Libya could become a link between North and South, and East and West. Africa had great human resource potential. As hundreds of thousands of African migrants headed north in search of economic opportunities, Libya could be “the gate to development instead of being the obstacle of migration from South to North”.

African labour could positively contribute to European Union growth, he said, noting that in 30 years, Europe’s population would shrink by an estimated 27 per cent, while Africa’s would expand to more than 2 billion. Agreements between the Libyan Government and European regulations could facilitate that contribution. The new Libya must be a democratic State, in which women had a genuine role in rebuilding and development. Libya’s new foreign policy must be based on mutual respect, mutual interests, non-intervention in the internal affairs of others, and adherence to international conventions, treaties and values.

Rebuilding Libya was an important matter for the entire Middle East and North African region, he said. The country could become a “model of democracy and successful development” — a vision which merited the full support of the Arab Spring movement. The United Nations, and its agencies, must have a leading role in that process in order to avoid corruption and a lack of transparency. The international community had intervened to stop Mr. Qadhafi’s massacre. He called on that “faithful friend” to become a “trustworthy partner” in helping to rebuild Libya.