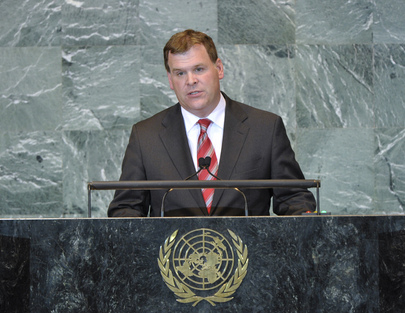 JOHN BAIRD, Minister for Foreign Affairs of Canada, said his country stood for what was principled and just, regardless of whether it was popular, convenient or expedient. “Canada will not go along with a double standard that castigates some United Nations Members for alleged failings while ignoring the notorious abuses of others. We supported the aspirations of those peoples who sought for themselves and their countries brighter futures during the Arab Spring that just passed. But we will not go along with the unilateral actions of the Palestinian Authority,” he said. “Our Government’s position has been clear — the only solution to this issue is one that is negotiated by the two parties themselves.”

He said multilateral institutions and action came from a collection of sovereign decisions based on individual States’ own interests. That was not narrow self-interest, but an expanded view of mutual interest in which there was room for all to prosper. Canada called that “enlightened sovereignty” — meaning, great things could be accomplished by working together. Collective action, however, did not mean uniformity. For example, when Canada placed strong sanctions on Syria’s current regime, it had acted independently, but in close consultation and cooperation with other nations.

Canada was the seventh largest contributor to the United Nations finances, and believed that it must be a force for positive action to make the world a better place, he said. But its relevance and effectiveness was imperilled when the founding principles were observed in word but not in deed. “So it is when the presidency of the Disarmament Conference passes to a regime involved in the illicit transfers of weapons, material and technology. Or when Iran, which mocks the values of this organization through outrages such as refusing to allow entry to UN observers on human rights, is permitted to seek leadership roles, such as a vice-presidency of the General Assembly and a spot on the Commission on Population and Development,” he said.

Canada consistently opposed the debasement of multilateral institutions by conduct that was inconsistent with their values. For example, this year marked the fiftieth anniversary of its principled refusal to support membership in the Commonwealth of Nations by South Africa’s apartheid regime. “The greatest enemies of the United Nations are not those who publicly repudiate its actions. The greatest enemies of the United Nations are those who quietly undermine its principles and, even worse, by those who sit idly, watching its slow decline. “We cannot sit idly,” he said.