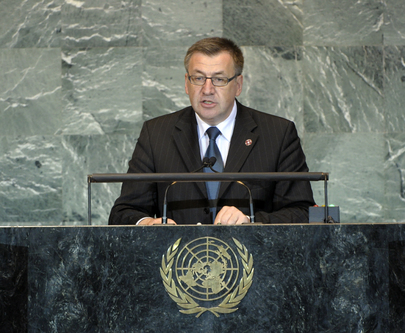 STEVEN VANACKERE, Deputy Prime Minister and Minister for Foreign Affairs and Institutional Reforms of Belgium, recalled that when he stood at the podium last year, he had insisted upon the importance of the principle of accountability. This year, there was even more reason to do so. In several countries in the Arab world, people were transforming the outlook of their societies, moving towards a more accountable leadership. In Côte d’Ivoire, a leader who had repeatedly plunged his country into violence had not stood the “test of democratic legitimacy”, and the nation was now ready to make a fresh start. In Europe, the arrest of Ratko Mladić showed that war crimes would not remain unpunished forever.

“The past year has shown that more than ever, history is on the side of those who, worldwide, strive for more accountability,” he said. First, that meant legal accountability, and he appealed to those Member States that had not yet done so to join and shoulder the Rome Statute. Second, it meant political accountability — which was a challenge in Europe, as well as elsewhere. European leaders should not run away from the obligation of being accountable to the people they represented, he stressed, adding in the “Durban spirit of non-discrimination” that that meant all people, regardless of their ethnic background, religion or belief, gender, sexual orientation or social position.

“Leaders who believe that they can cling to power through terror and suppression make a cruel mistake,” he stressed. Warlords who thought they could perpetrate the sexual abuse of women or the recruitment of child soldiers must be stopped and held accountable. Belgium, for its part, would not stand idly by when people claimed a future free of coercion and terror. “Instead of non-interference, Belgium believes in non-indifference,” he stressed. “Sovereignty is no longer a wall leaders can use to violate the rights of their citizens.”

In that respect, he pointed to Libya, where the Security Council had been able to prevent a massacre in Benghazi. Belgium had been among States that had taken action in that country. “We are not just responsible for what we do, but also for what we don’t do,” he stressed. Now the international community had the responsibility to help in that country’s reconstruction. In the Democratic Republic of the Congo, after years of violence, undeniable progress had been made. The role of the United Nations and of its Mission in the Democratic Republic of the Congo (MONUSCO) could not be ignored. However, challenges remained, including reform the security sector, establishment the rule of law and the fight against sexual violence. Those were the essential ingredients of the consolidation of democracy, which should be confirmed once and for all in the elections slated for November.

In the Middle East, he said, it was not acceptable that no solution had yet been reached to the long-standing conflict. The parameters of a sustainable solution were well known. Both the Palestinian and Israeli people had legitimate aspirations, and it must be possible to satisfy both legitimate needs. Over the past few months, the European Union had spared no efforts to start the negotiation process. “There is no alternative to negotiations, however risky this path might be,” he stressed. It was his sincere hope, therefore, that the steps proposed by the Quartet the previous day would be fully implemented. It could not be ignored that the Palestinian Authority had successfully progressed on the road to statehood.

The challenges the world faced today were many, he continued. They ranged from terrorism to climate change and sustainable development, from financial turmoil to terrible humanitarian tragedies like the one in the Horn of Africa, from cluster munitions to nuclear proliferation, notably in North Korea and Iran. Belgium believed that the only way to address those was through a multilateral approach. “No country, as big or important as it might be, is capable of tackling global challenges alone,” he said. Multilateralism should not be about blocking solutions, but should instead lead to change; it should also have the United Nations at its centre. In that vein, he was proud to announce a development in the particularly important field of international conflict mediation. Belgium had decided to financially support the United Nations Mediation Unit and to actively engage with the General Assembly President and with other Governments and non-governmental stakeholders to strengthen the role of the United Nations mediation efforts.