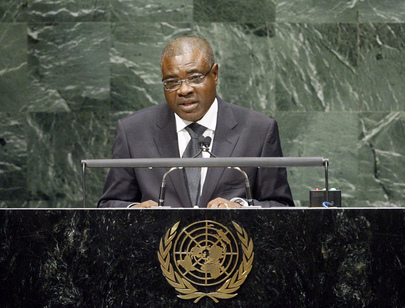 MANUEL SALVADOR DOS RAMOS, Minister of Foreign Affairs and Communications of Sāo Tomé and Príncipe, said the defence of multilateralism was of vital importance in seeking solutions based on the United Nations Charter. The role of the United Nations in preventing conflicts, promoting peace and supporting development should be bolstered. He echoed the concerns expressed by the President of Malawi and of the African Union in that regard.

Touching on a number of conflicts, he said that the consensus established until now around the question of Western Sahara should urge the parties involved to continue on the path of dialogue aimed at a peaceful settlement of that conflict. Global security was vital for the sustainable development of countries, and the international community needed to be cautious and aware of the risks that the spread of the Palestinian conflict caused for the entire Middle Eastern region and to international peace. Sāo Tomé and Príncipe welcomed the resumption of dialogue and encouraged Israel and the Palestinian Authority to continue on that course in hopes of peaceful coexistence.

He said that his country, with its vast sea borders, faced other risks, such as transnational crime, piracy, and drug trafficking. Thus, it would continue to give particular attention to regional integration organizations to which it belonged and to conflict prevention, management, and resolution mechanisms to ensure security and peace in Central Africa.

Regarding the Millennium Development Goals, he noted that the results in the field of education and health were encouraging, particularly in reducing child mortality and combating HIV/AIDS, malaria and other diseases. His country had made significant progress, but much remained to be done. Concerning climate change, Sao Tome and Principe considered it a collective responsibility to take measures to address the adverse effects of climate change, while it welcomed political willingness of Member States to build the necessary consensus on the various themes discussed at the Copenhagen Summit. He was concerned at attempts to use nuclear energy for non-peaceful purposes. Climate change caused imbalances in the microclimate of the country, with dramatic consequences on domestic production, which threatened food security. He counted on the invaluable collaboration and availability expressed so far in that regard by the international community in general and by United Nations specialized bodies.

He called on United Nations member countries, and on the specialized agencies, to find ways to make possible Taiwan’s greater participation in their work and mechanisms, such as in the International Civil Aviation Organization and the United Nations Framework Convention on Climate Change. He believed that Taiwan’s participation in those two forums would strengthen both mechanisms and better serve common interests. He reaffirmed his country’s readiness to contribute to the realization of the noble principles and objectives that were at the root of the creation of the United Nations.