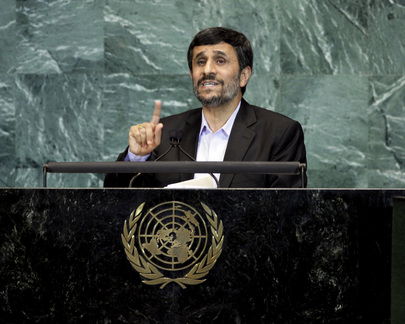 MAHMOUD AHMEDINEJAD, President of Iran, said that the League of Nations and the United Nations were established with the promise to bring about peace, security and the realization of human rights, which in fact, meant global management. Almost all Governments and known figures had condemned the event of 11 September 2001, which had affected the whole world for almost a decade. The propaganda machine had, however, come into full force and it had been implied that the whole world was exposed to a huge danger, namely terrorism, and that the only way to save it would be to deploy forces into Afghanistan. Eventually, Afghanistan, and shortly thereafter Iraq, was occupied.

It was said that 3,000 people were killed on 11 September, for which all were saddened. Yet, up until now, in Afghanistan and Iraq, hundreds of thousands of people had been killed and millions wounded and displaced, but the conflict was still going on and expanding. Other views were that some segments of the United States Government had orchestrated the attack to reveres the declining American economy, or that the attack had been carried out by a terrorist group but supported by the United States Government.

He, therefore, proposed that the United Nations should set up an independent fact-finding group for the events of 11 September so that in the future, expressing views about it would not be forbidden. He announced that, next year, Iran would host a conference to study terrorism and the means to confront it. The country invited officials, scholars, thinkers, researchers and research institutes from all countries to attend the conference.

Turning to Palestine, he said that the Palestinian people had lived under the rule of the occupying regime for 60 years. They had been deprived of freedom, security and the right to self-determination while the occupiers had been given recognition. On a daily basis, houses being destroyed over the heads of innocent women and children and people were deprived of water, food and medicine in their own homeland. The Zionists had imposed five all-out wars on neighbouring countries and on the Palestinian people. They had committed the most horrible crimes against defenceless people in the wars against Lebanon and Gaza. They had also attacked a humanitarian flotilla in blatant defiance of international norms and had killed civilians.

That regime, which enjoyed the absolute support of some Western countries, regularly threatened countries in the region and continued publicly announced assassinations of Palestinian figures and others while Palestinian defenders and those opposing it were pressured and labelled terrorists and anti-Semites. All values, even freedom of expression valued in Europe and the United States, were being sacrificed at the “altar of Zionism”. Solutions to that problem were doomed to fail because the rights of the Palestinian people were not taken into account. He wondered if those horrendous crimes would have been witnessed if, instead of recognizing the occupation, the sovereign right of the Palestinian people had been recognized. Iran’s unambiguous proposition was for the return of Palestinian refugees to their homeland and for a vote by the people of Palestine to exercise their sovereignty and decide on the type of governance they wanted.

He said the nuclear bomb was the most inhumane weapon and must be totally eliminated. The Nuclear Non-Proliferation Treaty prohibited its development and stockpiling and called for nuclear disarmament. Nonetheless, some permanent members of the Security Council had equated nuclear energy with the nuclear bomb and had distanced that energy from the reach of most nations by establishing monopolies and pressuring the IAEA while they had continued to maintain, expand and upgrade their own nuclear arsenals. That situation had meant that nuclear disarmament had not been realized but that nuclear bombs had been proliferated in some regions, including the occupying and intimidating Zionist regimes. Iran, therefore, proposed that 2011 be proclaimed the year of nuclear disarmament and “Nuclear Energy for all, Nuclear Weapons for None”.

He said that the inefficiency of capitalism and the existing world management and structures had been exposed in the wake of the financial crisis. The majority of States and nations were on a quest for fundamental changes and for the prevalence of justice in global relations. The cause of the ineptitude of the United Nations lay in its unjust structure. The major Powers had monopolized the Security Council due to the veto privilege while the main pillar of the Organization, the General Assembly, had been marginalized. The veto privilege encouraged impunity for aggression and occupation. He called for the veto to be revoked and for the General assembly to become the highest body of the United Nations.

Speaking in exercise of the right of reply, IRAN's representative said Belgium had made “baseless allegations” against his country’s nuclear programme.  Iran’s nuclear activities were, and always had been, for peaceful purposes.  According to the Nuclear Non-Proliferation Treaty, development of peaceful nuclear energy was the inalienable right of all States and his country was no exception.  Iran took its responsibilities seriously and its commitment to non-proliferation remained intact.  There had been an unwarranted focus on its safeguarded nuclear facilities, rather than addressing the unsafeguarded facilities of the Zionist regime.  He urged abandoning such an inconsistent approach to non-proliferation.

The representative of IRAN, speaking in exercise of the right of reply, said he wished to clarify two points.  Regarding comments made by the Prime Minister of Kuwait earlier in the day concerning islands located in the Gulf of Persia, he stressed that there was no conflict “whatsoever” over those islands, as they were considered an “eternal part” of Iran that fell under its sovereignty.  Iran would continue to spare no efforts to strengthen its “neighbourly and brotherly relations” with all its neighbouring countries, he said.

He then turned to what he called “bizarre comments” made by the Deputy Prime Minister of the United Kingdom earlier about the speech made by the President of Iran the day before.  The representative pointed out that his President had “simply raised a number of questions” concerning major events of the past decade, and that such comments made by the United Kingdom’s delegate only added to intolerance and impeded the freedom of expression.  A long time had passed since only a handful of Powers had dictated world opinion.  He also reminded the Assembly that Iran had been one of the first nations to have expressed a clear position concerning the terrorist attacks of 11 September 2001, as a cowardly and atrocious crime.

Addressing remarks made by the representatives of Sweden and Ireland regarding the human rights situation in his country, the representative of IRAN used his second intervention to say that those countries were ignoring their own record of human rights.  He urged them to stop spreading distortions against others and using United Nations tribunals to spread false accusations and distortions.