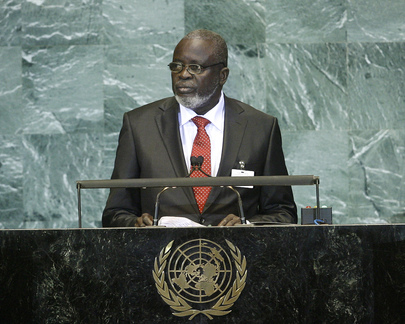 MALAM BACAI SANHÁ, President of Guinea-Bissau, noted that yesterday his country celebrated 37 years of independence, during which it went through much transformation.  He recognized that there was still a lot to be desired, however, in the area of social and economic progress, as well as in the area of stability, peace and security necessary for achieving development targets.  Less than a year ago, Guinea-Bissau faced tragic events that had led to early presidential elections, assisted by the international community to be free and fair, from which he had become the country’s leader.  Unfortunately, the condemned events of 1 April had clouded his country’s reputation, despite the authorities’ efforts since that time.

He appealed to all partners to proceed with the same spirit of friendship, solidarity, assistance and cooperation with his people and their democratically elected institutions “in this hour of need”, particularly in the urgent reform of the country’s defence and security sectors.  The military, which had been admired due to the struggle for independence and other accomplishments, now needed restructuring, as well as attention to other needs.  In addition, there was a risk that the more than 80 islands that made up the country could become a sanctuary for “evil-doers” who abused the space and the local people and potentially compromised the functioning of Government institutions.

A coordinated regional and global response was needed to address such problems, he said.  He thanked the regional organizations that were already providing assistance to address them, as well as bilateral support provided by Portugal, Brazil and other countries.  He added that the country itself was determined to confront its problems through dialogue that would culminate in a conference on national reconciliation.  Guinea-Bissau also boasted peaceful and stable relations with its neighbours, and had preserved approximately 15 per cent of its territory for nature conservation.

He said that instability had made the country’s financial situation difficult despite continued growth and the good performance of its exports in cashew nuts.   The weight of the external debt continued to be unsustainable, although a triennial agreement was approved by the International Monetary Fund (IMF) that would cover 2010 to 2012, following positive evaluations by that Fund and the World Bank.  Thus, it was essential that no hesitation should put in danger the country’s benefiting from the Heavily-Indebted Poor Countries (HIPC) initiative.

As the end of the first decade of the new millennium drew to a close, he said, he said that ethically acceptable answers must be found for such problems as migration, human trafficking and the trafficking of organs.  He supported efforts being made to resolve the conflict in the Middle East and to promote peace between ethnicities and religions, as well as respect for human rights.  He supported, further, global efforts to rehabilitate Haiti, and expressed hope that efforts to restructure the Security Council would result in a more equitable representation of the world and the ascension of the African continent.