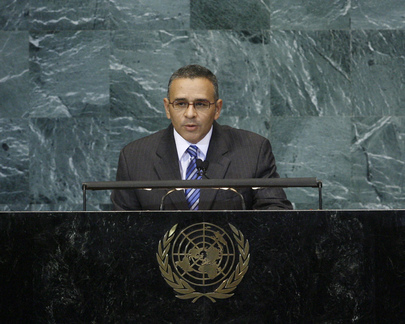 CARLOS MAURICIO FUNES CARTAGENA, President of El Salvador, said his country was among the many nations beset by serious problems, most notably poverty and injustice, and was not able to meet its expected Goals. “The more a ruler worries about the tragedy of his people, the greater the responsibility he has when reviewing its goals,” he said. While the United Nations agenda called for the reduction of poverty, the gap between rich and poor countries - and between the rich and poor within the countries - had prevailed over its good intentions. The recent killing of 72 migrant workers in Tamaulipas, including 14 Salvadorians, revealed the magnitude of the tragedy that found itself in Mexico and Central America, but affected the world. The tragedy, he said, was generated by three trends: lack of opportunity, exclusion, and widespread injustice facing Salvadoran youth; migration; and violent crime and the serious business of organized crime.

He noted that El Salvador was home to 6 million people, with 3 million more living in the United States. The United Nations Charter, however, does not guarantee humans rights to migrants. Therefore, the 200 million migrants, mostly young people, that left their countries for a better life, also left behind their basic human rights. That injustice underscored the lack of global initiative needed to address poverty and injustice in Central America.

Change required action, he stressed. A prison State that mobilized police to combat crime could resolve its problems, but it would be a historic mistake to not address the root cause. “A crazy person is that who does the same thing but expects different results,” he said, paraphrasing Albert Einstein. He noted that his region was not the main consumer of drugs or the major recipient of drug money. Nevertheless, the international community must wage a good battle against organized crime, money-laundering and drug cartels, but he stressed that it must not abandon Mexico or Central America.

The region needed investments in economics, intelligence and support for training or combating crime, in addition to assistance in creating new social and regional policies. He proposed a committee to combat organized crime that was similar to one established in Guatemala with the support of the United States, Canada and Spain. In addition, State organizations had been infiltrated by organized crime and means must be made available to continue to battle it.

The creation of the Central American IntegrationSystem had helped to create strong societies in the region, he said, and his country was moving forward. The Government had created a special body to fight corruption, El Salvador’s worst enemy, and one that poisoned policies that assisted the poor. It was also working to reduce the number of youth gangs that had become widespread and complex. El Salvador had a good record of fighting crime and drugs; however, without institutions to fight organized crime, it would not be possible for the country to meet its challenges.

In closing, he said El Salvador was waging a war, but it was not the war of the past. His country faced a powerful sophisticated enemy that had blended into its society. Fighting that war would require weapons and help from the global community. Quoting former United States President John F. Kennedy, he said: “If a free society cannot help the many who are poor, it cannot save the few who are rich.”