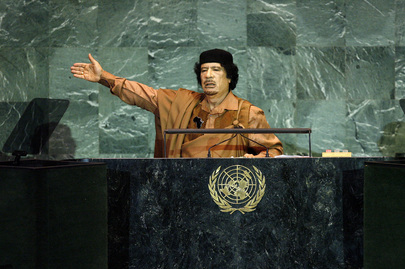 MUAMMAR AL-QADHAFI, Leader of the Revolution of Libya, speaking also on behalf of the African Union, said he hoped this gathering would be a historic one.  He also congratulated United States President Barack Obama on his first address to the General Assembly.  This year’s debate was being held in the midst of many challenges and the world should unite and defeat these challenges, which included climate change, the economic crisis and the food crisis.

He said many Member States were not present when the United Nations was created by three countries years ago.  They created the Charter but the Preamble was different from the provisions and articles.  No one objected to the Preamble, but he rejected everything that came after.  The Preamble of the United Nations Charter said nations were equal, whether large or small.  The veto power bestowed upon the five permanent members of the Security Council was, therefore, against the Charter, and he neither accepted nor recognized it.

Continuing, he said the Charter’s Preamble stated that military force should not be used unless there was a common interest.  But 65 wars, with millions of victims, had broken out since the creation of the United Nations.  Moreover, the Preamble said if there was aggression against any country, the United Nations together would check such actions.  Despite that, countries which held the veto used aggressive force against “the people”, even as the Charter said no nation had the right to intervene in the internal affairs of another.

He went on to express concern that right now, calls for reforming the Organization focused only on increasing the number of Member States.  That would only make things worse.  For instance, adding more Security Council seats would “give rise to more super-Powers, crush the small people and create more poverty”.  Such an impractical move would also generate more competition among countries.  In any case, the Council should act according to the rules of the United Nations.  The solution was to close the admission of new Member States and provide equality among those already belonging to the Organization, he said.

Currently, the Assembly was like a decor without any substance.  “You just make a speech and then you disappear...that’s who you are right now,” he said.  Setting that right would mean that the Security Council could serve as a tool for implementing resolutions adopted by the Assembly.  The Council should represent the interests of all countries, through individual seats or seats held by unions that represented each region of the world.  There were equal votes in the Assembly and there should be equal votes next door in the Security Council, he declared, adding that ultimately, for a united and peaceful world, serious Organizational reform was needed. Keeping his focus squarely on Security Council dynamics, he said that the 15-member body practised “security feudalism” for those who had a protected seat.  “It should be called the terror council”, he said, underscoring that terrorism could exist in many forms.  The super-Powers had complicated interests and used the United Nations for their own purposes.  Indeed, the Security Council did not provide the world with security, but gave it “terror and sanctions”.  He was not committed to adhere to the Council’s resolutions, which were used to commit war crimes and genocides.  He reiterated that the Council did not provide security and the world did not have to obey the rules or orders it decreed, especially as it was currently constituted.

Regarding Africa, the African Union deserved a permanent seat in the Security Council for the suffering it had endured for many years.  This had nothing to do with reform, he said, declaring that Africa deserved compensation, amounting to some $77.7 trillion for the resources and wealth that had been stolen in the past.  Colonization should be criminalized and people should be compensated for the suffering endured during the reign of colonial power.

Africans were proud and happy that a son of Africa was now governing the United States of America and it was a great thing -- it was a glimmer of light in the dark of the past eight years, he said.