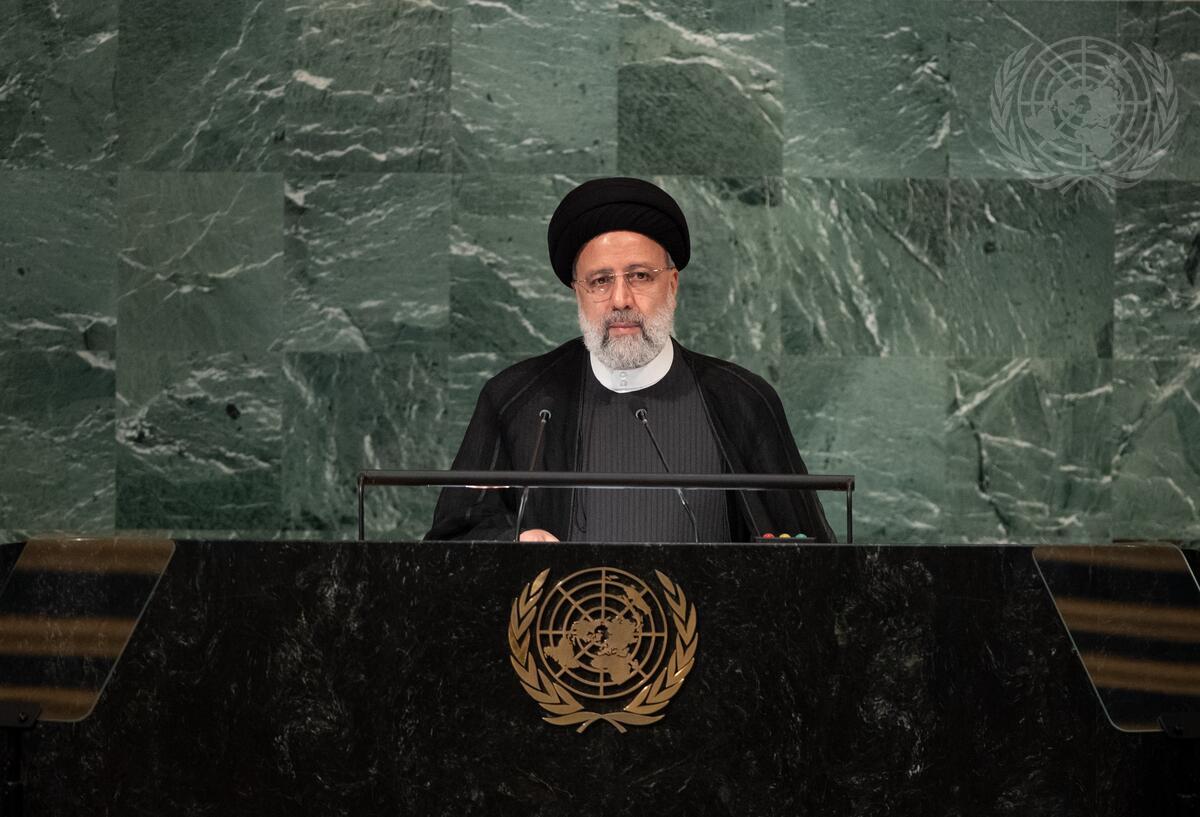 SEYYED EBRAHIM RAISI, President of Iran, underscored his country’s fight against injustice and called for globalization of justice.  Rejecting some of the double standards of certain Governments vis-à-vis human rights, he described unilateralism as a tool that has been used to hold many countries back.  On a selective basis, the United States cannot accept that certain countries have the right to stand on their own two feet, he asserted.  What is happening in Europe is a mirror image of what has been happening in Western Asia in the past few decades.  It shows that the United States has pursued its own interests at the expense of many other countries.  The Islamic revolution in his country was the beginning of the movement of the great nation of Iran to seek its own place in the world.  However, Iran has been faced with coup d’état attempts, oppressive sanctions and hegemonic interventions.  None of the successes of the Iranian nation have been acceptable to the great Power, he emphasized, recalling the time that Saddam Hussein tore up the Algiers accord and attacked Iran in an unprovoked manner, as well as the time when the United States trampled upon the nuclear accord.

The previous President of the United States announced that Islamic State in Iraq and the Levant/Da'esh (ISIL) was created by his country; for Iran, it makes no difference which Administration is responsible for the creation of the group.  What matters is that a Government on the other side of the planet has decided to bring havoc and chaos to the region at the expense of the lives and blood of women and children, he said.  The leader that descended into the arena of the fight against terrorism was General Qasem Soleimani, he recalled, describing his death as a “savage, illegal and immoral crime”.

Underlining that the history of Iran is that of a nation that has learned to not depend on anyone else, he said Iran has learned its lesson:  despite announcing its neutrality during both World Wars, it was subject to foreign occupation.  After the nuclear accord was signed and accepted within the framework of the Security Council, it was trampled upon unilaterally.  Regardless of the oppressive sanctions, Iran has become a strong country with many impressive goals in the field of knowledge and technology, he stressed, pointing also to the attempt to bring a universal health-care coverage to 85 million people.

He underscored that war is not the solution to crises and called for dialogue and negotiations.  Regional security must be born from within, not from the outside.  In this context, he recalled that the region has not seen an occupying Power as savage as the Zionist regime, which has managed to form the world’s biggest prison in Gaza.  The illegal settlements on Palestinian territory and the killing of Palestinian children show that seven decades of Israeli occupation and savagery has not ended.

He went on to elaborate on the double standards used to describe nuclear science capacities of Iran.  Stressing that Iran is only pursuing peaceful endeavours, he said his country is not seeking to build or obtain nuclear weapons.  Iran has been subject to 35 per cent of nuclear inspections while only 2 per cent of world nuclear activities are taking place in his country, he underscored, adding that it was the United States that left the agreement, not Tehran.  Calling sanctions “a weapon of mass destruction”, he said “abiding by those is helping oppression take place”.  The maximum pressure policy has suffered an embarrassing defeat, he asserted, adding that “the knot of the nuclear deal must be opened from the same place they managed to tie this knot together”.

The representative of Iran, in response to the “baseless allegations” made by the Czech Republic’s delegate against certain countries, reiterated his Government’s commitment to promoting and protecting the human rights of all its people, particularly women and girls.  That delegation supports a regime that systematically undermines the rights of the Palestinian people, and he urged the same to avoid politicizing human-rights issues, as advocacy for human rights should not interfere with the sovereign rights of States.  He also invited that delegation to respect the Charter of the United Nations and avoid interfering in the internal affairs of other Member States.  He added that, as one of the original signatories to the Treaty on the Non-Proliferation of Nuclear Weapons, Iran supports that instrument, is in full compliance with it and will continue working with the IAEA.

The representative of Iran, speaking in exercise of the right of reply to respond to “unfounded accusations made by the representative of the Israeli regime”, said that the same again misused the United Nations platform to make false claims designed to conceal the regime’s malicious policies and terrorist activity.  While that representative falsely accused Iran of being a threat to regional security, the Israeli regime continues its apartheid policies against the Palestinian people and works with terrorist groups to further its sinister political agenda in the region.

He went on to say that, despite that representative’s claims that Iran’s peaceful nuclear programme threatens regional peace and security, the true threat thereto is the Israeli regime’s development and stockpiling of weapons of mass destruction.  It is the only one in the Middle East that has yet to accede to the Treaty on the Non-Proliferation of Nuclear Weapons, and the international community must oblige it to eliminate its weapons of mass destruction and cease its destructive activities in the region.  To the representative of Bahrain, he said that the term “Persian Gulf” has been the correct appellation for the body of water situated between the Arabian Peninsula and the Iranian Plateau “since 500 years before Christ and will remain so forever”.

The representative of Iran rejected Albania’s unfounded claims that his country committed a cyberattack on Albania’s infrastructure.  Cyberattacks have disrupted public services and government functions, he asserted, stressing that cyberspace must be used by Albania for peaceful purposes.  He condemned the illegal entry of Albanian police forces into Iran’s diplomatic mission in Tirana.

In response to the 24 September 2022 statement delivered by the delegate of the United Arab Emirates that referred to three islands in the Persian Gulf as belonging to that country, he rejected these baseless claims as a violation of good neighbourliness and non-interference in the domestic affairs of other States.  The three islands of Abumusa, Greater Tunb and Lesser Tunb in the Persian Gulf are part of Iran’s sovereign territory, he emphasized, reiterating Iran’s claim over them.  Expressing continued determination to maintain bilateral diplomatic relations with the United Arab Emirates, he described his country’s sovereignty over the three islands as non-negotiable.  Recalling the tragic death of an Iranian woman, he said preliminary findings based on video footage show no evidence of police misconduct and rejected false claims in that regard, urging Member States not to interfere in the domestic affairs of other sovereign States.

The representative of Iran, taking the floor again in response to the statement of the United Arab Emirates, which repeated baseless claims, reiterated his country’s territorial integrity and sovereignty over the three islands in the Persian Gulf.  Noting that his country has always rejected any false narrative which claim otherwise, he added:  “No claim, no matter how many times it is repeated will be able in any way to dent or undermine our resolve to refute such claims.”  Iran’s territorial integrity and sovereignty over the islands are not negotiable.  He then emphasized the islands’ Iranian histories which predate the establishment of the United Arab Emirates.

In response to the statement from Albania, he repeated his country’s categorical rejection of alleged cyberattacks and highlighted the illegal and forceful intrusion of Iran’s diplomatic premises in Tirana by Albanian police forces on 8 September 2022.  He deplored such actions as violations of the Vienna Convention on Diplomatic Relations and reminded Albania of its responsibilities under the Convention.