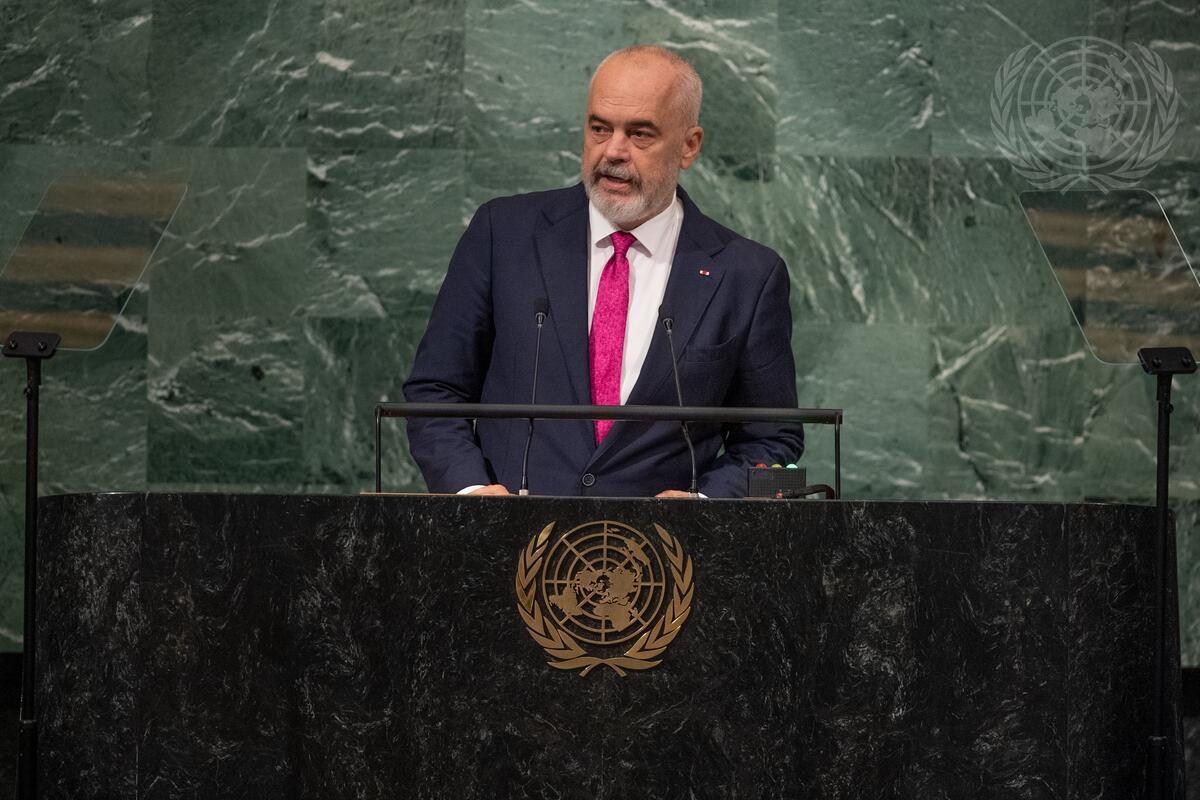 EDI RAMA, Prime Minister of Albania, stressed that the international community’s hopes and beliefs were shattered and its assurances broken by an unprovoked, unjustified and premeditated war in Ukraine.  “It is an open battle between an aging cynical tyranny and a young growing democracy,” he stressed.  Shying away from this battle between the principles — sovereignty, territorial integrity, freedom and the right to decide on the future independently — and principles contrary to those, is shying away from the duty to “protect ourselves, our countries, our children”.  Condemning the sham referenda recently conducted in some parts of the occupied Ukrainian territory, he called for and expressed support towards adopting a convention on the prevention and punishment of crimes against humanity.

At a time when a multitude of crises have put the world in turmoil through open conflicts, terrorism and nuclear threats, he pointed out that cybersecurity is also closely linked to and has a huge impact on peace and security.  He recalled that his country had become the target of an unprovoked cyberattack in July, which turned out to be a State-sponsored aggression, orchestrated and carried out by Iran.  Adding that Albania was left with no other choice but to sever its diplomatic relations with that country, he urged the Organization to focus more seriously and concretely to address cybersecurity by investing in prevention of cyberattacks and helping Member States build resilience.

Turning to the Balkans, he stressed that nothing concerning the wars and crimes which had occurred in the region will be forgotten.  He also stated that justice and accountability must be pursued based on facts with proof and evidence, not with fiction or distorted reality.  Highlighting an example of a report adopted by the Parliamentary Assembly of the Council of Europe in 2011, which accused the “Kosovo freedom fighters of the despicable crime of organ trafficking”, he expressed hope that based on the accusation’s lack of evidence, Parliamentary Assembly will honour the truth and accept his country’s request to produce a follow-up report on this issue.

He went on to say that his country is focused on building the future of the Balkans together with its neighbouring countries, as characterized by the launch of the Open Balkans initiative, a platform open to all countries in the region.  Meanwhile, he reiterated his country’s support of the need for every country, including Serbia, to recognize the Republic of Kosovo.  The two sides should work towards a comprehensive peace agreement “by doing their part to adopt a European Union-United States-backed breakthrough,” he added.

The representative of Albania, in response to the statements from Serbia and Iran on the Western Balkans, reiterated her country’s stance that there is no other future than one of mutual understanding, cooperation and close partnership.  This she continued is true for Albania and “for every other country in the Western Balkans, including Kosovo”.

Responding to Iran’s justification of the unjustifiable, she pointed out that Tehran “has been caught red-handed” in their attempt to damage core Government infrastructure by disrupting public services, creating chaos and fomenting tension.  While this is not the first time Iran has engaged in unprovoked and unlawful activity, such attempts, she declared, have failed and will continue to fail.  Urging all to condemn their rogue behaviour, she then reaffirmed the remarks made earlier in the debate by her country’s Prime Minister.