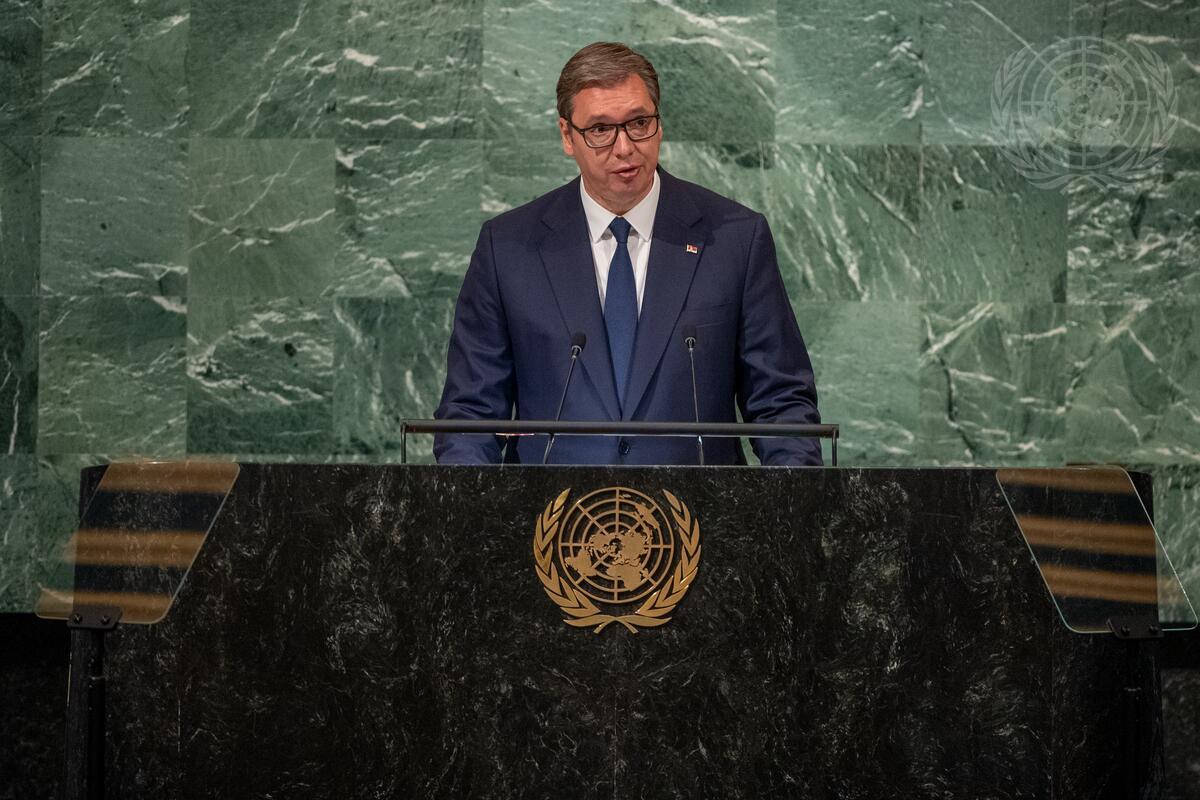 ALEKSANDAR VUČIĆ, President of Serbia, said the General Debate is being held during a period of undermined world peace that has not been seen since the Second World War and the founding of the United Nations.  The global challenges are threatening to radically change the international security architecture and jeopardize the established international legal order.  “Such complex times demand a lot of wisdom and unity, in order to preserve peace as the absolutely most important heritage woven into the foundations of the United Nations Organization,” he said.

Serbia has not stepped on someone else’s territory or endangered the territorial integrity of a single sovereign State, so that anyone might intervene or carry out aggression against it, the way it was done in 1999.  Yet that did not prevent NATO from attacking a sovereign country without the Council’s decision. The signing of the agreement with NATO, whose provisions envisaged adoption of Security Council resolution 1244 (1999), and which confirmed and guaranteed partial sovereignty and full territorial integrity of Serbia, did not prevent many Western countries from unilateral recognition of the independence of the so-called “Kosovo” and from violating, once again, Serbia’s territorial integrity.  Even though Serbia still experiences the consequences of the gross violation of basic provisions of international public law, the country has not given up on the United Nations founding principles.  “We shall keep advocating for the consistent observance of the principle of inviolability of borders, respect for sovereignty and integrity of all other UN Member States,” he said.

He said he was especially grateful to all Member States, now comprising most of the Assembly, who support Serbia’s territorial integrity, particularly in the space and territory of Kosovo and Metohija.  He said he is searching very patiently, and with much good will, for a compromise regarding Kosovo and Metohija, under the auspices of the European Union and within the Belgrade-Pristina dialogue.  While it has been a difficult process for more than 10 years, he sees no alternative.  “It is better to negotiate for a hundred years, than to wage war for a single day,” he said, adding the goal was a long-lasting peace to provide for a prosperous life for Serbs and Albanians in the region.

There are many unprecedented challenges facing countries this century, including energy security, the financial safety of developing countries and distortions in the food supply chains.  Energy security is an inseparable part of national security and key for economic development and progress in Serbia, he said.  He is working to provide for the country’s continuous energy supply. Another important challenge is finding efficient solutions to the food supply security situation.  Serbia will continue to be a reliable partner in achieving the common goals defined within the United Nations framework.

The representative of Serbia, responding to the statement by the Prime Minister of Albania, called it regretful that he had called for the recognition of the unilaterally declared so-called “Republic of Kosovo”, as well as disturbing and counterproductive to ongoing dialogue.  As Security Council resolution 1244 (1999) states, Kosovo is an autonomous province within Serbia, he explained.  Serbia’s position remains that it fully supports attempts at resolving all pending issues with the authorities in Pristina to find peace and stability in the region.