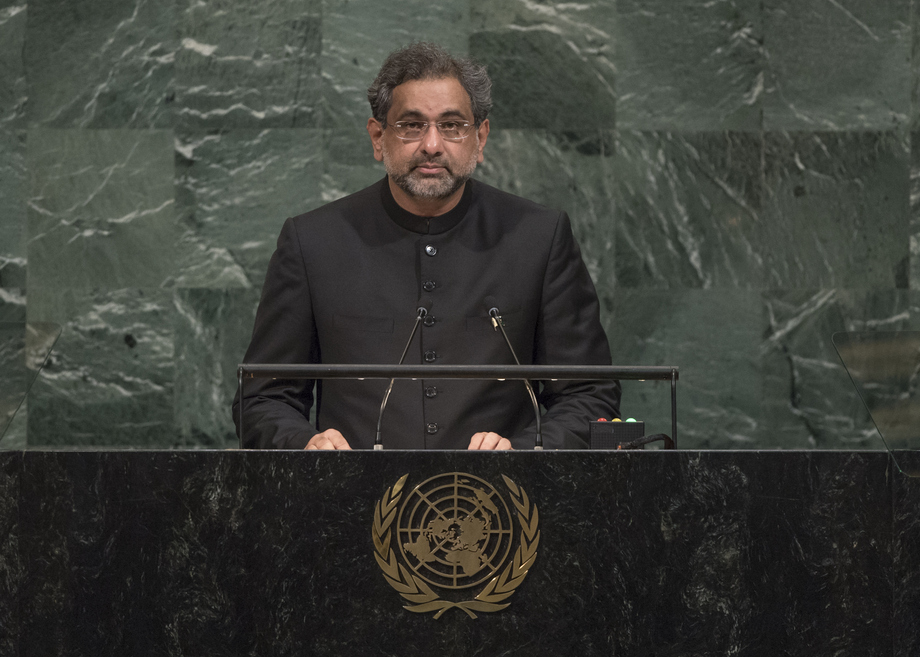 SHAHID KHAQAN ABBASI, Prime Minister of Pakistan, expressed concern that the principles of the United Nations Charter were being eroded.  In recent years, some countries had displayed a growing proclivity to resort to unilateral force and intervention against others.  “Coercion and threats have emerged again as the main currency in the management of inter-State disputes and differences,” he said.  Drawing attention to renewed East-West tensions, war and violence in the Middle East and the continued tragedy of Palestine, he said the legitimate struggle for self-determination of the people of Jammu and Kashmir continued to be suppressed by India’s occupation forces, while the ethnic cleansing of Rohingyas in Myanmar was not just an affront to all norms of humanity, but also challenged the world’s collective conscience.

“From day one,” he said, Pakistan had faced hostility from its eastern neighbour, India.  That country refused to abide by Security Council resolutions and had deployed some 700,000 troops to occupied Kashmir — “the most intense foreign military occupation in recent history”.  It had used massive and indiscriminate force against Kashmiris who protested that oppressive rule.  To divert attention from those brutalities, India frequently violated the ceasefire along the line of control in Kashmir.  “The international community must act decisively to prevent the situation from a dangerous escalation,” he stressed, calling on the Secretary‑General to appoint a special envoy on Kashmir.

Apart from the Afghan people, he said, Pakistanis had suffered the most from four decades of foreign intervention and civil wars in Afghanistan.  Those wars had blighted Pakistan with a flow of extremists and terrorists, guns and drugs as well as an influx of refugees.  Peace would not be restored to Afghanistan by continuing to resort to military force.  Having suffered so much from terrorism, it was especially galling to be blamed for the military or political stalemate in Afghanistan, and to be used as a scapegoat.  “Taliban ‘safe havens’ are located not in Pakistan but in the large tracts of territory controlled by the Taliban in Afghanistan,” he stressed.

Emphasizing that his country was not prepared to fight the Afghan war on Pakistan’s soil, he said it also could not endorse any failed strategy that would prolong and intensify the suffering of the people of either country.  The most urgent and realistic goals in Afghanistan were to employ concerted action to eliminate the presence of Da’esh and their affiliates, including the TTP (Tehrik-i-Taliban Pakistan) and Jamaat-ul-Ahrar, and to promote negotiations between Kabul and the Afghan Taliban.  Noting Pakistan’s counter-terrorism credentials, he said it had been his country’s efforts that enabled the decimation of Al-Qaida in the wake of the 11 September attack on New York.  Pakistan’s military campaigns had succeeded in clearing its tribal areas of almost all militant groups.

“We took the war to the terrorists,” he continued, adding that “we have paid a heavy price.”  Thousands had been injured or killed, and the country’s economic losses were estimated at over $120 billion.  Nevertheless, it remained committed to fully implementing its national action plan against terrorism and extremism.  “Terrorism is now a global phenomenon, which must be addressed comprehensively,” he said, noting that the international community had failed to address the issue of State-sponsored terrorism.  Eradicating terrorism required addressing its root causes, which were not only poverty and ignorance.  Terrorism was an extreme response to real or perceived political or other grievances — including foreign intervention — as well as oppression and injustice.  Confronted by a hostile and increasingly militarized neighbour, Pakistan had been forced to maintain “credible deterrence” capabilities, he said, adding that the country had only developed nuclear weapons when the same had been introduced to the region by that neighbour.  Noting that its arsenal was tightly and effectively controlled, he said the world community would be well-served by enabling Pakistan to joint global non-proliferation arrangements, such as the Nuclear Suppliers Group, on a non-discriminatory basis.

The representative of Pakistan, responded to the statements by the representatives of India, Bangladesh and Afghanistan.  It was unfortunate that India had decided to criticize his country’s statement since while it continued to kill the people of Jammu and Kashmir.  Noting that Indian mortar fire had killed 10 civilians only yesterday, he said that country’s desire for hegemony at the cost of others would never materialize.  He went on to say that Bangladesh was spreading lies at his country’s expense, and emphasized that the issues of 1971 had been agreed and settled.  “We have to move on,” he added.  He urged Afghanistan to stop blaming others for its problems, eliminate terrorist havens and deal with its “narco-State”.

Speaking in exercise of the right of reply, the representative of India responded to Pakistan.

The representative of Pakistan, in response to India’s delegate, said India was diverting attention from the plight of people in Jammu and Kashmir, desperate to conceal its actions in the region.  “Kashmiris will never be defeated,” he said, and India must answer for its crimes.  India’s hegemonic desires and animosity towards Pakistan were its real enemy, he said, adding that the people of Kashmir would “rise again”.