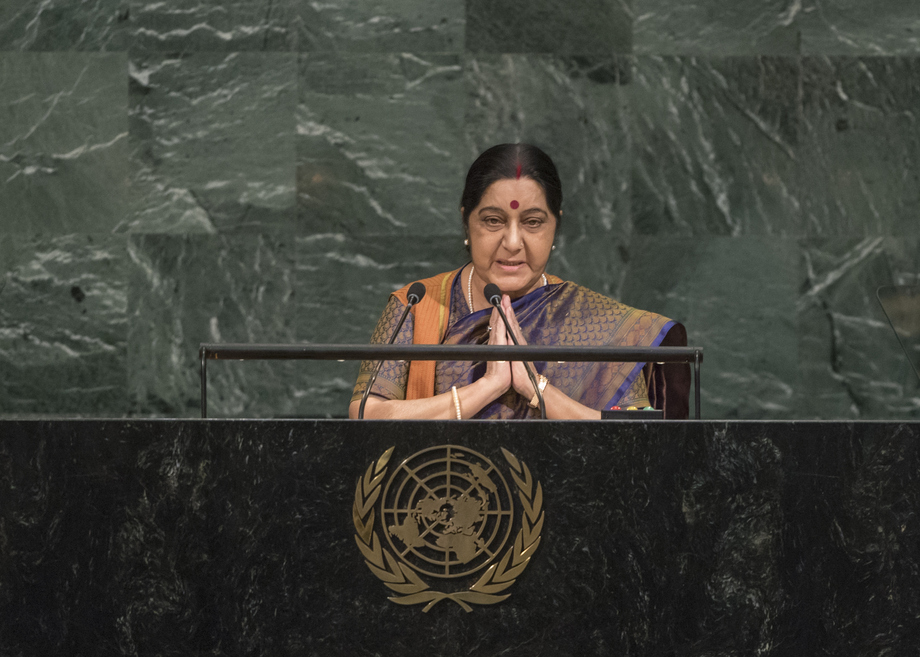 SUSHMA SWARAJ, Minister for External Affairs of India, described two ways to work towards the eradication of poverty — the traditional method of incremental aid and “hand-holding”, and the more radical route of economic empowerment adopted by Prime Minister Narendra Modi.  All of India’s economic programmes centred around the goal of empowering the poor, she said, citing the Jan Dhan plan — the world’s largest financial inclusion scheme — as one example.  Demonetization was another courageous decision taken to challenge the “black money” resulting from corruption.  While rising nations such as India were generating change, developed countries must become active partners in assisting those still mired in poverty to attain the 2030 Agenda and its 17 Sustainable Development Goals.

While India was fighting poverty, she said, its neighbour Pakistan “seems only engaged in fighting us”.  This week at the Assembly, Prime Minister Shahid Khaqan Abbasi had accused India of State-sponsored terrorism and violating human rights.  Those listening had had one observation: “Look who’s talking,” she said.  “A country that has been the world’s greatest exporter of havoc, death and inhumanity became a champion of hypocrisy by preaching about humanity from this podium.”  Pakistan had forgotten that under the Shimala Agreement and the Lahore Declaration, the two countries had agreed to settle all outstanding issues bilaterally and decided in 2015 to enter into a comprehensive bilateral dialogue.  Pakistan now must answer why that proposal had withered, as it was responsible for aborting the peace process.  India had risen, despite being the principle destination for Pakistan’s nefarious export of terrorism. “What has Pakistan offered to the world, and indeed its own people, apart from terrorism?” she asked.

Condemning such activities, she warned that making pious declarations to combat terrorism had become a ritual for some in the Assembly.  “The fact is that when we are required to fight and destroy this enemy, the self-interest of some leads them to duplicity.”  While India had proposed the creation of a convention against international terrorism as early as 1996, the United Nations still had not been able to agree on a common definition of terrorism.  She pressed the Assembly to stop seeing that evil “with self-defeating and indeed meaningless nuance,” adding that “evil is evil” and cautioning against differentiating between “good terrorists” and “bad terrorists”.  On climate change, she stressed that just before the start of the Assembly, nature had sent a warning in the form of hurricanes and earthquakes.  “The developed world must listen more carefully than others, because it has more capacity than others,” she said, voicing support for the Paris Agreement and requesting assistance for developing countries through technology transfer and green climate financing.

The representative of India, speaking in exercise of the right of reply, asked how Pakistan could play the role of victim when it defended terrorism. India noted that Pakistan had become a territory synonymous with “pure terror”. Saying Pakistan had harboured terrorists, even legitimizing some as politicians, India affirmed that Jammu and Kashmir were and would always remain an integral part of India. Pakistan’s actions had earned it the name of “Terrorstan”, India asserted, saying Pakistan had “upstreamed” terrorists and provided safe haven to terrorist groups. India said “failed State” Pakistan had diverted funds towards the military. The priority for Pakistan, India said, had to be the abandonment of its destructive world view.

The representative of India said remarks by her counterpart from Pakistan had attempted to divert attention from that country’s actions.  Referring to Pakistan as a “hub of terrorism”, she said there had been a concerted effort to mislead the international community.  Pakistan had used falsehoods to support its own false narrative.  Given those actions, she was forced to display a real photo of Indian citizens tortured and killed by Pakistani terrorists.  Such treatment of Indians in Jammu and Kashmir portrayed the reality of the situation, she said, adding that “the true face of Pakistan was not hidden from anyone”.

Speaking in exercise of the right of reply, the representative of Pakistan responded to India.