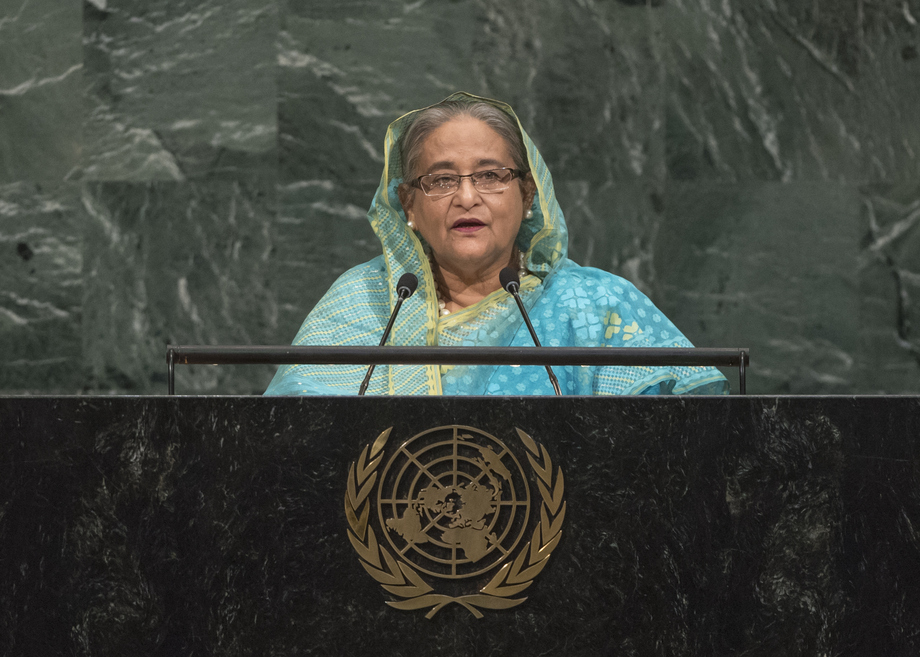 SHEIKH HASINA, Prime Minister of Bangladesh, said it was with a heavy heart that she was making her fourteenth address before the General Assembly, having just witnessed the hunger and distress of Rohingya from Myanmar who had taken shelter in the Bangladeshi city of Cox’s Bazar.  Those people were fleeing ethnic cleansing in a country where they had lived for centuries.  Bangladesh was sheltering more than 800,000 forcibly displaced Rohingya, she said, adding that ongoing atrocities and human rights violations in Rakhine State had aggravated the situation along the Bangladesh-Myanmar border.  It was horrifying to see the Myanmar authorities lay landmines along that border to prevent Rohingya from returning.  Those people must be able to return in safety, security and dignity, she said.

She thanked members of the Security Council and the Secretary-General for their proactive attempts to stop atrocities and bring peace and stability to Rakhine State and called on the United Nations and the international community to take immediate and effective measures for a permanent solution to the Rohingya crisis.  She proposed that Myanmar unconditionally, immediately and forever stop violence and ethnic cleansing in Rakhine State; that the Secretary-General immediately send a fact-finding mission to Myanmar; and that all civilians, irrespective of religion and ethnicity, be protected in Myanmar, including through the creation of United Nations-supervised safe zones.  She also proposed the sustainable return of all forcibly displaced Rohingya in Bangladesh to their homes in Myanmar, and the immediate, unconditional and full implementation of the recommendations of the Advisory Commission on Rakhine State.

During its 1971 war of liberation against Pakistan, Bangladesh endured an extreme form of genocide, with 3 million people killed and more than 200,000 women violated, she said.  Now it was bringing the key perpetrators to justice, she stated, urging the international community to take collective action to prevent the recurrence of such heinous crimes.  She called for the resumption of the Middle East peace process and an end to all hostilities and discrimination against Palestinians.  Looking forward to the Secretary-General’s proposals for financing sustaining peace, she said Bangladesh would contribute $100,000 to the United Nations Peacebuilding Fund.

As a major troop- and police-contributing country, Bangladesh considered it important to uphold the effectiveness and credibility of United Nations peacekeeping missions, she said.  Bangladesh would maintain its own capability readiness, enhance the scope of its peacekeeping training and deploy more female peacekeepers.  Emphasizing the country’s zero tolerance approach to allegations of sexual exploitation and abuse, she announced a $100,000 contribution to the Trust Fund in Support of Victims of Sexual Exploitation and Abuse.  Condemning terrorism, she urged the United Nations to address cyberthreats.  On climate change, she called the Paris Agreement a bastion of hope for climate justice, adding that Bangladesh had achieved exemplary success in building resilience against floods and other disasters.

Speaking in exercise of the right of reply, the representative of Pakistan responded to Bangladesh.