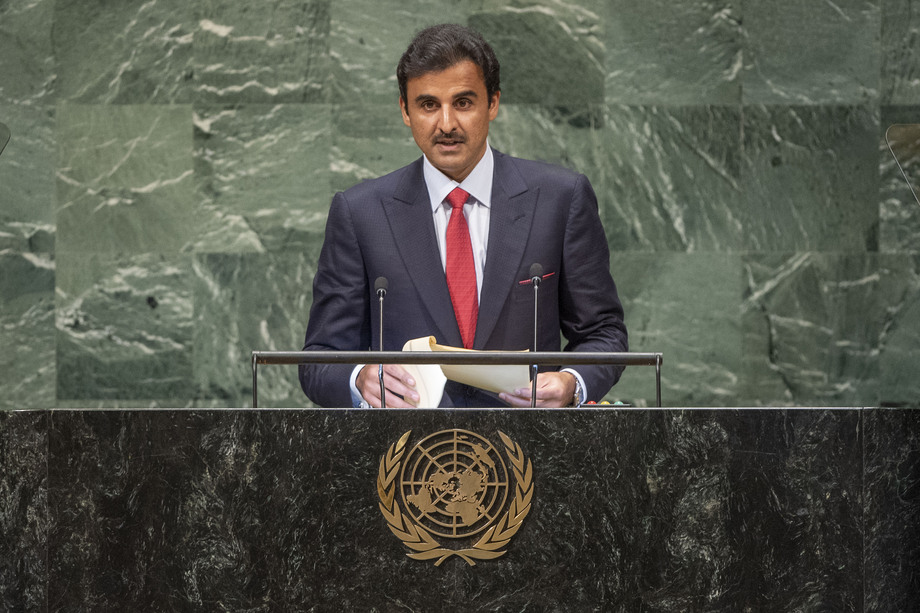 SHEIKH TAMIM BIN HAMAD AL-THANI, Emir of Qatar, said the world faces challenges that cross boundaries and must be dealt with according to international law and without double standards.  To those ends, he called for the reform of the United Nations.  The illegal blockade imposed on Qatar was the result of a pre‑arranged campaign, based on fabrication.  Despite the challenges that blockade created, his country experienced a strengthening of status and consolidation of its role as an active partner in regional and international arenas.  He expressed appreciation for the assistance of friendly nations in ending the crisis, adding that differences in views on regional issues should not paralyse the effectiveness of important regional organizations like the Gulf Cooperation Council, as it harms their international reputation.

Little progress has been made on lingering issues in the Middle East, he said, citing the political stalemate in Palestine.  The deterioration of the situation in the Palestinian territories lays a historic responsibility on the Security Council, he said, reaffirming the importance of negotiations and emphasizing the commitment to the resolutions of international legitimacy, including the two-State solution and the Arab peace initiative.  His country will continue to provide material and political support to the Palestinian people.

Regarding the ongoing crisis in Syria, he said the failure to deter that country’s regime from committing crimes will render the provisions of international and human rights law devoid of any meaning and will further raise the existing ceiling on the use of violence against people in his region.  The humanitarian, moral and legal catastrophe in that country requires the international community to double its efforts to find a peaceful solution. Regarding the situation in Yemen, he called on all parties to end the conflict based on Security Council resolution 2216 (2015).  Advocating for free access for humanitarian assistance in all areas in Yemen, he announced Qatar’s agreement with the United Nations to fight cholera in Yemen by supporting projects addressing the disease there.  Regarding the Libyan crisis, he said the security and territorial integrity of the country were at stake.  Foreign intervention in Libyan affairs only complicates the crisis and contradicts Security Council resolutions.  In Iraq, he praised the efforts of the Government to restore stability and national reconciliation in its fight against terrorism.

Terrorism has become one of the world’s outstanding challenges, he said, affirming his country’s prioritizing of the issue on every level.  In order to achieve success in the war on terrorism, four prerequisites must be met.  First, there must be international cooperation in combatting violence resulting from extremism and violence against civilians.  Second, standards of fighting terrorism must be unified so that there is a universal definition not dependent on religion or ethnicity.  Third, the roots and causes of terrorism must be addressed in the political, social and cultural spheres.  Lastly, it is crucial to avoid giving partisan connotation to the term “terrorist”.  Educating youth is the first line of defence for the collective security system and crucial in fighting terrorism.  To that end, his country, in collaboration with the United Nations, has committed to educating 10 million children and providing economic empowerment to half a million young people.

Highlighting the importance of the protection of human rights in Qatar, he said his country had recently passed a law regulating political asylum in the country and has invited several international human rights organizations to establish regional offices there.  In conclusion, he emphasized the need for freedom of access in the cybersphere and the need to protect citizens against hacking and the importance of national cybersecurity.

The representative of Qatar, speaking in exercise of the right of reply, said that the delegate of the United Kingdom had made accusations against his country. The embargo against Qatar did not achieve its goals, and the reason for the restriction has never been expressed. He said Qatar has made efforts in the fight against terrorism. If the accusations are repeated by the same parties, it will undermine their own credibility. Stating that terrorism is always rooted in religious radicalization, he said Saudi Arabia is using the principle of terrorism against those who disagree with them, which is very immature. Qatar has demonstrated calm and restraint in this crisis. The embargo had consequences and is a violation of the rights of Qatari citizens and expatriates. Citizens and expatriates were unable to participate in the annual pilgrimage, a grave, unprecedented human rights violation. Still, the Qatar Government has not taken measures against Saudi Arabia.

The representative of Qatar, rejecting the mendacious accusations made by his counterpart from Saudi Arabia, said that his country will continue to combat terrorism in the region.

The representative of Qatar, exercising the right of reply, responded to the false statements made by his counterparts from the United Arab Emirates and Bahrain. Qatar plays an active role in combating terrorism and fostering peace. These allegations have never been substantiated and they violate international human rights laws, he said, adding that these States do not practice what they preach when they terrorize civilians and interfere with the affairs of other nations, such as financing a coup attempt in Qatar and pretending to combat terrorism when terrorist activities have originated from inside their borders. Bahrain’s unilateral action against Qatar is only undermining regional economic growth. Meanwhile, the United Arab Emirates is violating the principles of good neighbourliness with its targeted actions against Qatar, such as implementing discriminatory policies against Qataris.

The representative of Qatar, responding to the statement made by the representative of the United Arab Emirates, said there is no basis to these repeated allegations. While Qatar suffers under an unjust blockade, the country has forged new international allegiances. Mentioning progressive national measures, he said Qatar will never impede international measures and it exercises restraint. Yet, the United Arab Emirates and Bahrain do the opposite, taking an approach based on force, including digital piracy and cybercrime.