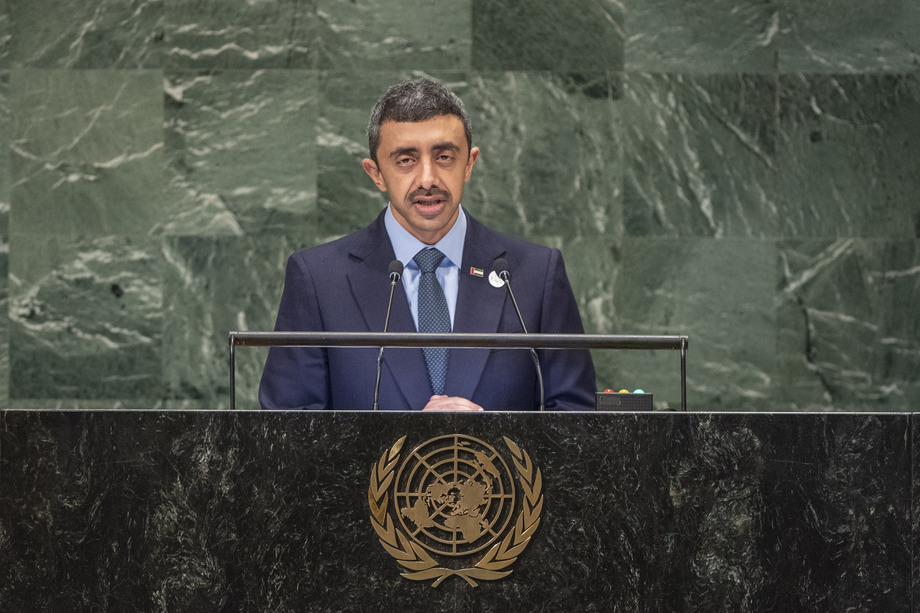 ABDULLAH BIN ZAYED AL NAHYAN, Minister for Foreign Affairs and International Cooperation of United Arab Emirates, said the international order is being characterized by major changes, most notably the rise of armed terrorist groups, some of which have the support of rogue States.  The United Arab Emirates must be more active in maintaining regional security through stronger partnerships.  The Government has a comprehensive approach to regional security that addresses the different dimensions of threats.  Key among those threats is interference in the affairs of the Arab world, where countries like Iran seek to undermine security efforts by spreading chaos, violence and sectarianism.  The United Arab Emirates joined the Coalition to Support Legitimacy in Yemen to put an end to the Houthi coup and to address Iran’s nefarious interference and pointed to the differences between illegitimate Houthi armed groups and the legitimate Government of Yemen.

Despite efforts to restore stability to Yemen, Houthi intransigence regarding peace initiatives has exacerbated the humanitarian crisis in the country, he said.  In response, the Coalition launched military operations to liberate Hodeida from the grip of Houthis and to achieve a strategic shift that enhances the prospects of a political solution to the crisis.  Operations in Hodeida bear in mind the work of relief organizations, he assured.  The United Arab Emirates is also making progress in the fight against Al-Qaida in the Arabian Peninsula.  Concerns over Iran’s intentions are reflected in the decision of the United States to withdraw from the nuclear agreement with that country and re-impose sanctions.  Iran has not ceased its aggressive behaviour in the region and has not abandoned initiatives to develop weapons of mass destruction.

The second major challenge facing the region is the spread of extremist and terrorist groups and their exploitation of modern technology, he said.  The situation is exacerbated by States who establish media outlets that incite hatred, he stressed, stating that his Government is at the forefront of the fight against extremism.  These efforts include participation in the G-5 Sahel Joint Forces as part of efforts to eliminate extremism and terrorism wherever it exists, he said, adding that the Forum for Promoting Peace in Muslim Societies is working to build an alliance of Abrahamic religions and world philosophies.  Policies to counter supporters of extremism make no distinction between a group or a State, he said, noting that alongside close allies his Government has taken sovereign measures towards Qatar.  A third challenge facing the region is the absence of a political solution to the Palestinian issue.  The people of Palestine continue to wait for the international community to reach a comprehensive, just and lasting solution to end their suffering.

The region also faces a deterioration of economic, social and humanitarian conditions, he said.  At the core of the Government’s foreign policy development efforts is the strengthening of economic opportunities and empowerment of women and youth in conflict-afflicted countries, he said, calling for the protection of Yazidi and Rohingya populations.  He reiterated the vital role of United Nations reform in supporting political processes, strengthening dialogue and building conditions to maintain peace and security, adding that the international community must take a firm and consistent stance towards States that have hostile policies and violate international law.  He reiterated his Government’s demand for its legitimate right to sovereignty over the islands of Great Turb, Lesser Turb and Abu Musa, currently under Iranian occupation.

The representative of United Arab Emirates, commenting on the statement made by Qatar’s representative, rejected several false allegations. Qatar has financed terrorist activities, threatening peace in the region and the world. Measures that have been taken are in reaction to Qatar’s actions, she said, reaffirming that the United Arab Emirates respects the provisions of the International Court of Justice.

The representative of the United Arab Emirates, in response, called such allegations erroneous. She called on the Qatari regime to stop drawing attention from the real issue. Qatar is spreading false information about the roots of the crisis and is exploiting regional instability by promoting terrorism, she said, emphasizing that her country is at the forefront of fighting the challenges of the region.

The representative of the United Arab Emirates rejected Iran’s occupation of the three islands in the Arabian Gulf, which she said are an integral part of her country’s territory. She refuted Iran’s claims to those islands and called for questions on the matter to be brought before the International Court of Justice. She condemned Iran for meddling in the domestic affairs of countries in the region, highlighting their provision of arms to the Houthis in the Yemeni conflict, a blatant violation of Council resolutions 2216 (2015) and 2231 (2015).