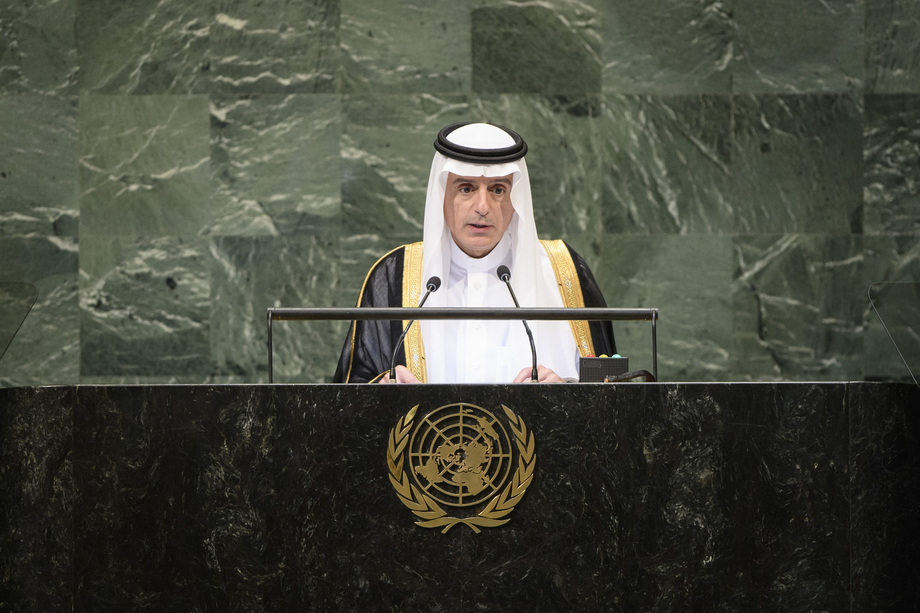 ADEL AHMED AL-JUBEIR, Minister for Foreign Affairs of Saudi Arabia, said his country is focusing on a peaceful solution to conflict, undertaking various mediation efforts.  The peace agreement reached between Ethiopia and Eritrea should be deemed historic and essential.  “This illustrates the political and critical role played by Saudi Arabia in the advancement of international peace and security,” he said.  Turning to the rights of the Palestinian people, he underscored their right to an independent State, and the need to respect relevant Security Council resolutions.

On the conflict in Yemen, he said that Houthi militia continue to manufacture missiles and carry out activities that destabilize the region.  He stressed the need for a political solution to the crisis in Yemen.  Saudi Arabia will continue to facilitate all humanitarian efforts to alleviate the suffering of the Yemeni people, he added, underscoring that his nation provides economic support and essential supplies to Yemen.

Terrorism and extremism are major challenges facing the world, he continued, also adding:  “Our region has never been spared.”  The Kingdom has set up institutions to oversee the fight against terrorism and extremism.  On Iran, he said that Tehran continues its terrorist activities and aggressive conduct, expressing support for the latest United States policy on Iran.  Tehran has trained and armed terrorist militias.  Such aggressive conduct constitutes a glaring breach of all international laws and treaties.  “Iran should be held accountable in the international legal system,” he stressed.

Turning to the boycott against Qatar, he said that Doha supports terrorists and hosts extremists, and spreads hateful rhetoric through its media outlets.  The Syrian crisis has entered its eighth year, he continued, stressing that that country’s people must be able to live on their own soil.  Saudi Arabia supports legitimacy in Libya, he added, urging Libya’s unity and respect for its territorial integrity.  The international regime that has existed for centuries is rooted in sovereignty and respect for international law.  “This is not up for discussion.  Sovereignty is a red line that cannot be crossed,” he stressed.  The Kingdom has placed the Saudi citizen at the heart of its development plans.

The representative of Saudi Arabia, responding to her counterpart from Iran, echoed the remarks of the United Arab Emirates, adding that her country is accustomed to hearing mendacious allegations from a regime that always used lies to explain its failures. That Iranian missiles are being fired at Saudi towns is undeniable, she said, adding that Riyadh is committed to a peaceful settlement in Yemen. Iran should act responsibly, not feed extremism or support terrorist groups, she said.