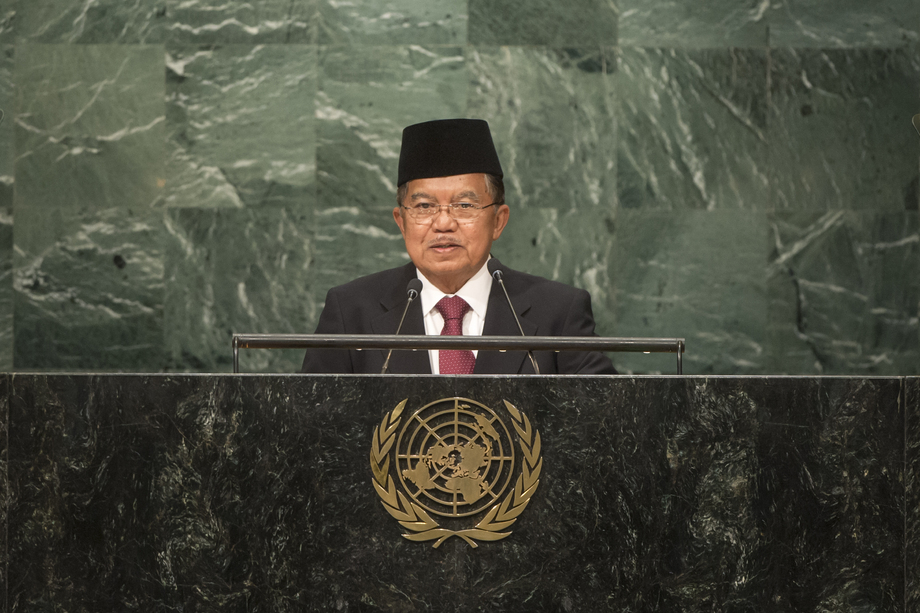 MUHAMMAD JUSUF KALLA, Vice President of Indonesia, said the international community had laid down a new set of goals and timeframe in the 2030 Agenda for Sustainable Development and Indonesia was fully committed to implementing it.  The Government was mainstreaming the Goals into the country’s policies, finalizing a financial framework, engaging all relevant stakeholders and developing national guidelines as well as a monitoring, evaluating and reporting mechanism.

Implementation of the 2030 Agenda must be supported by strong global partnerships that would make a difference in advancing sustainable development, he said.  The global community must provide sufficient means and funding mechanisms for all countries to carry the Agenda forward.  Peace was a prerequisite to development and successful implementation of the 2030 Agenda, he said, adding that Indonesia’s experiences in the 1950s and 1960s attested to that.  But instability and insecurity continued in many parts of the world due to territorial disputes, terrorism and extremism.

He said the Middle East peace process remained difficult to move forward and irregular migration continued.  The global community was confronted almost daily by media pictures of the stark reality created by continuing insecurity, all taking place against the backdrop of a slowing global economy, he said.  The gap between rich and poor was widening and climate change was accelerating, as were its effects on small island States.  Emphasizing that no one country could resolve those challenges on its own, he said they required a global partnership for a global solution.

Indonesia Right of Reply (in all available languages)

Also exercising the right of reply, the representative of Indonesia spoke in response to statements made by the Solomon Islands and Vanuatu and echoed by others regarding Papua, a province of Indonesia.  She rejected the insinuating statements they had made, which reflected an unfortunate lack of understanding of history and progressive developments in Indonesia, including in the provinces of Papua and West Papua.  Their politically motivated statements were designed to support separatist groups which had engaged in inciting public disorder and armed attacks on civilians and military personnel.  It was regrettable and dangerous of States to use the United Nations and the Assembly to advance their domestic agenda and divert attention from problems at home.  Indonesia’s commitment to protecting human rights was unquestionable.  It was a founding member of the Human Rights Council and had initiated the Organisation of Islamic Cooperation’s Commission on Human Rights.  It had a full-fledged functioning democracy, coupled with the protection of human rights at all levels.  Thus, it was impossible for any human rights allegations to go unnoticed and unscrutinized.  Domestic mechanisms were in place at the provincial levels in Papua and West Papua, and Indonesia would give focus to the development of those provinces and to the best interests of all.

The representative of the Solomon Islands, speaking in exercise of the right of reply, cited ongoing human rights violations that Indonesia had inflicted on Melanesian people.  While acknowledging efforts by the Government of Indonesia to establish human rights mechanisms as well as its ratification of the Convention against Torture, he said it had never defined torture or attempted to eradicate it.  The Solomon Islands had received reports from other Member States as well as civil society leaders regarding human rights violations in West Papua, he said, calling on Indonesia to allow United Nations rapporteurs to investigate those violations.  How could members of the United Nations, as defenders of human rights, allow violations against more than 500,000 West Papuans over the last 50 years? The Organization must find a way to stop the loss of life and Member States must agree on certain rights and be accountable for them.  The United Nations had a responsibility to protect all people from human rights violations and should also hold other Member States accountable, he added.

The representative of Indonesia said that allegations by the Solomon Islands of human rights violations against Melanesians were intended to support the separatist movement.  They went against the principles and purpose of the United Nations Charter by violating the internal affairs and sovereignty of other States.  The allegations arose from ignorance of the facts on the ground and were “trash information” from separatist groups.