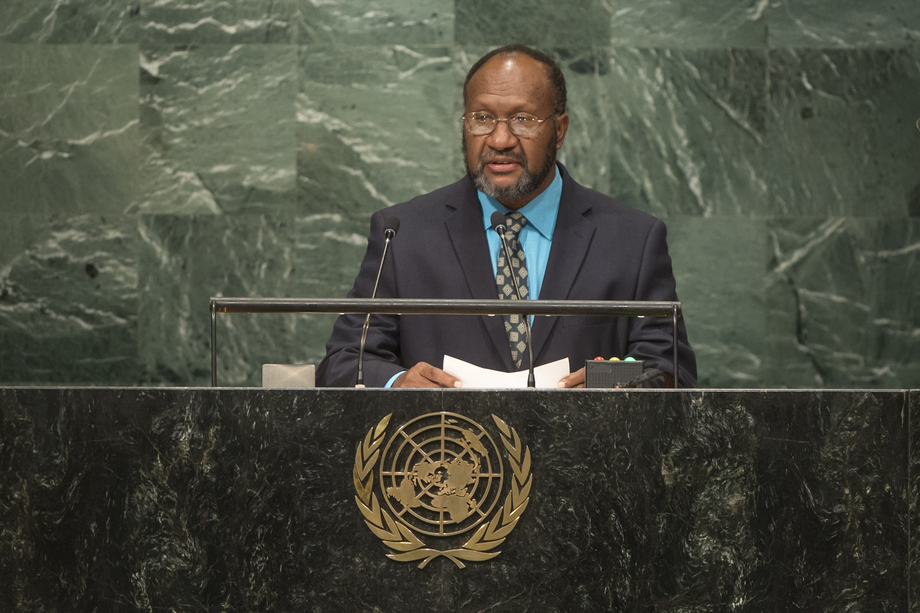 CHARLOT SALWAI TABIMASMAS, Prime Minister of Vanuatu, said that climate change was real and its consequences were being felt worldwide.  Vanuatu had deposited its instrument of ratification of the Paris Agreement with the Secretary-General two days ago, he said, calling on other States to follow suit as soon as possible.  Like any organization, the United Nations needed reform.  Vanuatu favoured greater Security Council transparency, accountability, relevancy and inclusiveness.  It also supported a revitalization of the work of the General Assembly.  Such reforms required leadership on the part of large States, he said, urging the Council and Assembly to appoint a new Secretary-General of irreproachable personal integrity who would be a beacon of hope for the voiceless.

To achieve the Sustainable Development Goals, the United Nations system must work actively with regional groups such as the Pacific Islands Forum, he said.  Vanuatu condemned all forms of nuclear proliferation and remained committed to the Non-Proliferation Treaty, and reaffirmed its position in favour of a nuclear-free Pacific.  He noted how Vanuatu was integrating the Sustainable Development Goals into its national development policy, with protection of the oceans being given top priority.  Mobilizing domestic resources to finance sustainable development was a priority for the Government, complementing funding from development partners.  Such initiatives would help Vanuatu exit the list of least-developed countries in 2020.

Noting his country’s vulnerability to climate change and rising sea levels, he said international assistance was appreciated, but that coordination of post-disaster financial aid through non-governmental organizations was sometimes inefficient and failed to respect national reconstruction priorities.  Vanuatu was proud to contribute to United Nations missions in Haiti and Côte d’Ivoire and it was ready to send more troops if called upon.  On decolonization, he welcomed United Nations assistance with electoral lists in New Caledonia, whose people should freely choose their future status of self-determination.  He went on to urge the United Nations to take concrete measures to address human rights concerns in West Papua.