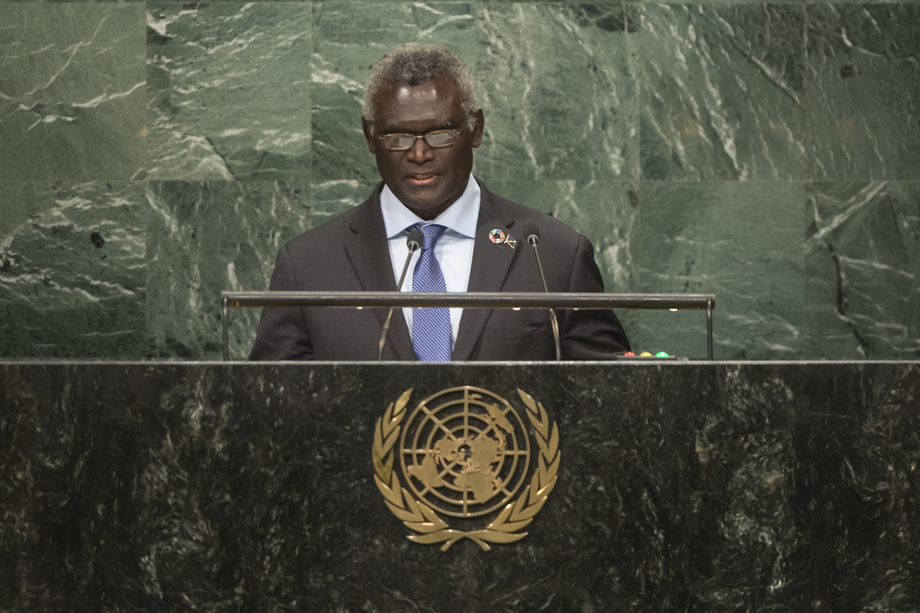 MANASSEH SOGAVARE, Prime Minister of the Solomon Islands, expressed gratitude that a Pacific Islander had been elected President of the General Assembly for the first time.  He also expressed hope that the United Nations would upgrade its presence in his country to a full country office under the new Secretary-General.  Recalling that 2015 had been a year of agreements, he said 2016 was the time for implementing the agreed goals.  He said his Government had started integrating the Sustainable Development Goals into its 2016–2035 National Development Strategy.

Regarding refugees and migrants, he noted that small island developing States required more assistance to manage large displaced populations.  The challenge of climate change had not been adequately addressed in the context of displacement and migration, he said, also noting with concern that not enough attention had been paid to achieving the goal of keeping the temperature increase to 1.5°C.  He called on major emitters and industrial countries to treat the threat of climate change with a renewed sense of urgency since the existence of island States was at stake.  Delaying action further would come at a steep cost, he warned.

He called for further action to protect biodiversity, including a new international agreement to address it, and for the creation of a world authority on oceans.  The Solomon Islands welcomed the decision to convene the United Nations Conference on Oceans and Seas in 2017.  In addition, he expressed grave concern about human rights violations against Melanesians in West Papua and called for Taiwan’s full participation in the work of the United Nations.  He also noted the need to reform the Security Council and to ensure adequate regional representation.

Solomon Islands Right of Reply (in all available languages)

Indonesia Right of Reply (in all available languages)

The representative of the Solomon Islands, speaking in exercise of the right of reply, cited ongoing human rights violations that Indonesia had inflicted on Melanesian people.  While acknowledging efforts by the Government of Indonesia to establish human rights mechanisms as well as its ratification of the Convention against Torture, he said it had never defined torture or attempted to eradicate it.  The Solomon Islands had received reports from other Member States as well as civil society leaders regarding human rights violations in West Papua, he said, calling on Indonesia to allow United Nations rapporteurs to investigate those violations.  How could members of the United Nations, as defenders of human rights, allow violations against more than 500,000 West Papuans over the last 50 years? The Organization must find a way to stop the loss of life and Member States must agree on certain rights and be accountable for them.  The United Nations had a responsibility to protect all people from human rights violations and should also hold other Member States accountable, he added.

The representative of Indonesia said that allegations by the Solomon Islands of human rights violations against Melanesians were intended to support the separatist movement.  They went against the principles and purpose of the United Nations Charter by violating the internal affairs and sovereignty of other States.  The allegations arose from ignorance of the facts on the ground and were “trash information” from separatist groups.