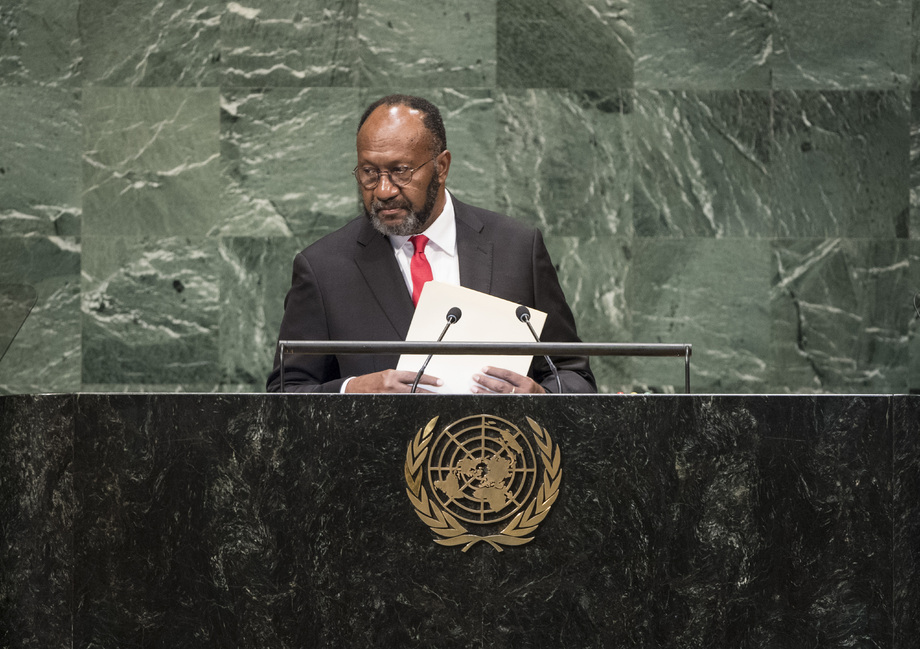 CHARLOT SALWAI TABIMASMAS, Prime Minister of Vanuatu, highlighted the many achievements of the United Nations in the past seven decades, noting that extreme poverty had been reduced by half and “more girls are in school than ever before”. Women, particularly in rural areas, are contributing to the global economy and the health of mothers and children have improved.  However, overshadowing those achievements are the United Nations failures, including the inability of the Security Council to take decisive action on Syria.  Calling on that organ to demonstrate leadership in preserving global peace, he welcomed the reform efforts of the Secretary‑General.

Turning to human rights, he noted that every country must have a resilient national human rights system to achieve meaningful success in development.  The Pacific region has committed to strengthening its climate resilience.  As the earth rapidly approached a point of no return as evidenced by heatwaves, extreme droughts and the frequency of weather phenomena, it was crucial to take concerted action.  According to the World Risk Report of the United Nations University, Vanuatu is the country most at risk in the world in terms of exposure to natural disasters, which is putting tens of thousands of its citizens’ lives at risk.  If greenhouse gas emissions remain at the present level, there will be increasing costs to deal with, he cautioned.

Developed counties had committed to mobilize $100 billion for climate finance for vulnerable countries by 2020, he continued.  Yet, how this will be achieved remains unclear.  Calling for the adoption of a specific road map for the collection of those funds, he stressed, “climate change will not wait”.  In addition, more flexible access to climate funding was crucial.  The Pacific region cannot afford to see the Paris Agreement relegated to the archives of the United Nations.  That represented a real danger for the survival of their future generations.  Calling on the parties to the Agreement to step up their determination, he noted that as the largest oceanic continent, the Pacific islands are focusing on sustainable policies for the sound management and conservation of the oceans.  Welcoming proposals to support those regional efforts, he highlighted the work of the Pacific Islands Forum.

While 750 million people from more than 80 former colonies had achieved political independence over the past seven decades, the aspirations of millions of others were still denied, he noted.  Commending the work of the Organization’s Special Political and Decolonization Committee (Fourth Committee), he said that decolonization must remain on the United Nations agenda.  New Caledonia is in the process of determining its own destiny, he said, calling on the international community to support their right to participate fully in the upcoming referendum which must take place in a free and fair manner.  Further, the Human Rights Council must investigate the human rights abuses in West Papua.

Ensuring national sustainable development was a priority for his country, he said, adding that Vanuatu’s Sustainable Development Goals are people‑focused and flexible so that it could achieve a balance between the three dimensions.  Eradication of poverty is essential.  Nonetheless, the country cannot shoulder that responsibility alone.  The difficulty of that task is amplified because Vanuatu gets exposed to natural disasters in increasing number, including recent volcanic activity in one of the islands that led to evacuations.  Expressing gratitude to development partners who helped the country at this time, he noted that Vanuatu would graduate from least developed status in 2020, and asked them to continue supporting the country.