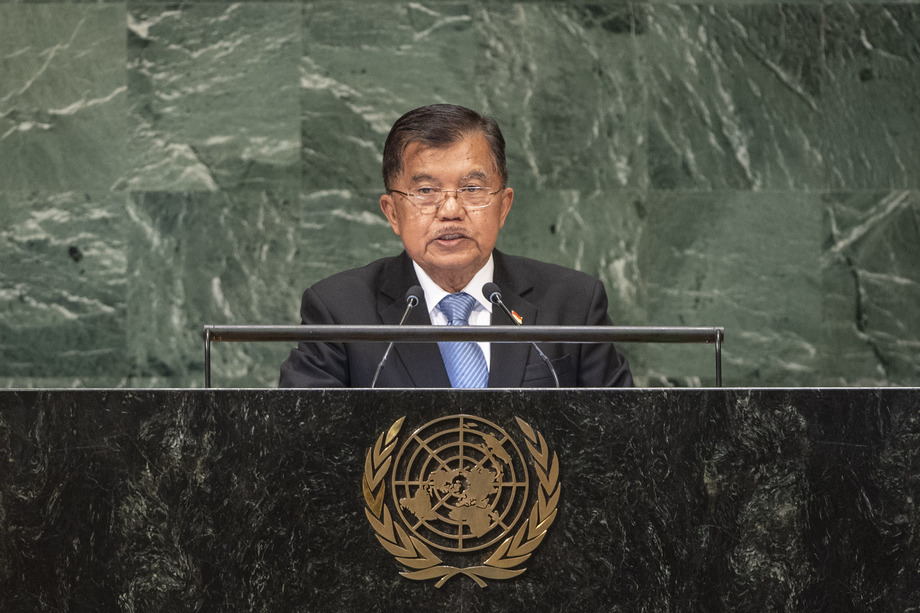 MUHAMMAD JUSUF KALLA, Vice-President of Indonesia, said that as the world grapples with conflicts, extreme poverty, inequality, zero‑sum thinking and narrow nationalism and democracy and human rights violations, people look for leadership from superhero‑like Powers.  “We do not need to call on the strength of the Avengers or the Justice League,” he said, arguing that the global leaders in the General Assembly have the strength of individual will, courage, compassion, selflessness and humility.  There is no effective leadership without genuine responsibility.  Lithuania will become a non‑permanent Security Council member in 2019 and a true partner for peace, he said, noting that peace is not merely the absence of war, it is the continuous effort to maintain stability and prevent conflict.

Turning to the Asia‑Pacific region, he said that as geopolitical and geostrategic landscapes are changing fast, Indonesia and other Association of Southeast Asian Nations (ASEAN) States see the larger region as a single geostrategic theatre cooperating and not competing with each other.  The commitment to peace and stability in the Middle East will be questioned if the Palestinian‑Israeli conflict is not solved, he said, adding that Indonesia supports the two‑State solution and a truly independent Palestinian State.  Turning to peacekeeping, he noted Indonesia’s contribution of more than 3,500 personnel to nine United Nations missions and its readiness to deploy 4,000 more, including more women, by 2019.  He endorsed the Action for Peacekeeping initiative to improve peacekeeping capacity.  The 2030 Agenda, Paris Agreement and the first ever global instrument on migration to be adopted in Marrakesh in December demonstrate collective compassion, selflessness and global leadership at its finest.  Living up to these commitments is “very simple on paper, yet not so straightforward in practice”, he said, warning that time is running out.

Through South-South and triangular cooperation, Indonesia has trained more than 6,000 participants in over 500 capacity‑building programmes around the world, he said, citing plans to launch the Indonesia Aid for Development programme to reinforce the country’s international assistance.  The first Indonesia‑Africa Forum is a testament to his country’s strong commitment to “win‑win cooperation” with the African continent.  He also cited the Indonesia‑Africa Infrastructure Dialogue aimed at accelerating development in Africa.  As the largest archipelagic country in the world, Indonesia is vulnerable to the impact of climate change, an issue to be addressed at the Archipelagic and Islands States Conference and Our Ocean Conference to take place next month.

Turning to the fight against violent extremism and radicalism, he said creating just, inclusive, democratic, equitable and tolerant societies is crucial.  Injustice, exclusivity, extreme poverty, illiteracy and massive youth unemployment must be uprooted, and hard and soft power approaches must be improved.  Pointing to the horrific terrorist attack in Surabaya, Indonesia, he said the evolution of violence by terrorists knows no boundaries, underscoring that using children as weapons can never be right.  Indonesia strongly deplores the attempts of one country to become part of the separatist movements, he said, adding that it will not remain silent while such hostile acts continue.  Indonesia will not let any country undermine its territorial integrity.

The representative of Indonesia, responding to comments made by his counterpart from Vanuatu that mentioned “Papua and West Papua”, said such declarations violated the principles of the United Nations Charter. For many years, Vanuatu has been trying to “sell” the idea that there were human rights violations in those provinces. Vanuatu’s accusation that Indonesia committed human rights violations is unacceptable, he said, adding that “it’s like the pot calling the kettle black”. The United Nations membership decided, almost 50 years ago, the final status of Papua as part of Indonesia, he said, adding that Vanuatu’s comments are an outrageous challenge to that United Nations decision.

The representative of Indonesia, responding to his counterpart from Vanuatu , said that country is directly challenging internationally agreed principles of friendly relations between States, sovereignty and territorial integrity. The status of Papua and West Papua as a part of Indonesia is final, irreversible and permanent. If the representatives of Vanuatu wish to keep bringing up the issue, Indonesia suggests that they study international law, and if their country is concerned about human rights, it should start at home, he said.