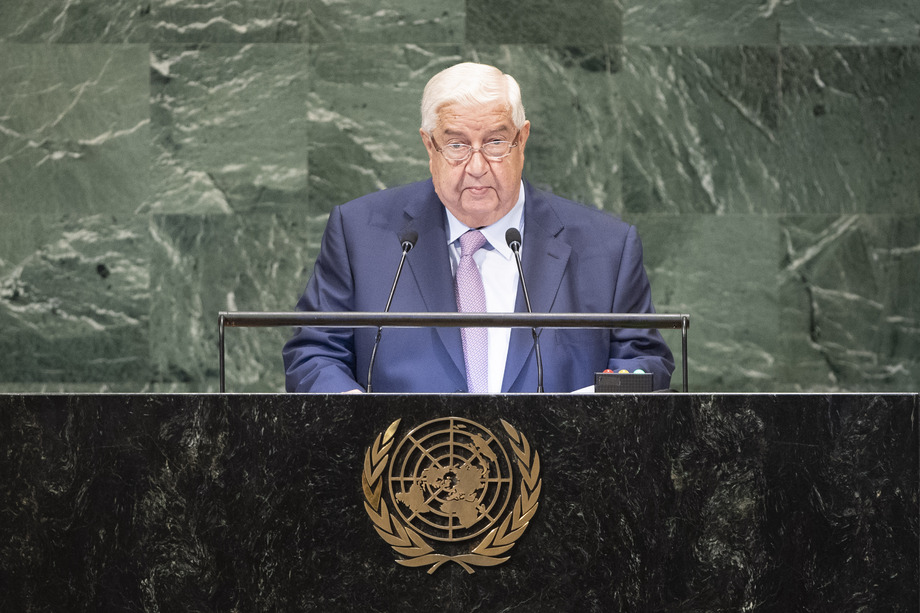 WALID AL-MOUALEM, Minister for Foreign Affairs and Expatriates of Syria, said it has been more than seven years since the beginning of the dirty war against Syria.  His country remains committed to fighting until all terrorist groups, as well as any illegal foreign presence, are purged from Syrian territories.  Certain States have denied Syria its right, under international law, and its national duty to combat terrorism and protect its people within its own borders.  At the same time, these Governments formed an illegitimate international coalition, led by the United States, on the pretext of combating terrorism.  The so‑called coalition has done everything except fight terrorism.  It has become clear that the coalition’s goals are in perfect alignment with the terrorist groups, providing direct military support to terrorists on multiple occasions as they fought the Syrian army.

The situation today is more stable and secure thanks to progress made, he noted.  The Government continues to rehabilitate the areas destroyed by terrorists to restore normalcy.  Conditions are now present for the voluntary return of Syrian refugees.  Thanks to the Russian Federation, the Syrian Government will spare no effort to facilitate the return of those refugees and meet their basic needs.  A special committee was recently established to coordinate the return of refugees to Syria and help them regain their lives.  Syria has called on the international community and humanitarian organizations to facilitate these returns.  However, some western countries continue to prevent the return of refugees.  They are spreading irrational fears among refugees and are politicizing what should be a purely humanitarian issue.

As Syria moves ahead on counter‑terrorism, reconstruction and the return of refugees, it remains committed to the political process without compromising its national principles, he continued.  These include preserving the sovereignty, independence and territorial unity of Syria, protecting the exclusive rights of Syrians to determine the future of their country without external interference, and eradicating terrorism from the country.  His Government has engaged positively in the Geneva talks, Astana process and the Syrian national dialogue in Sochi.  However, it has always been the other parties that rejected dialogue and resorted to terrorism and foreign interference to achieve their goals.  Local reconciliation is also under way with agreements aimed at helping to restore stability and a normal life to these areas and allow people to return to the homes they were forced to leave because of terrorism.

He went on to say that Syria completely eliminated its chemical program and fulfilled its commitments as a member of the Organization for Prohibition of Chemical Weapons (OPCW), as confirmed by numerous OPCW reports.  Furthermore, Syria has always cooperated with OPCW to the largest extent possible.  Unfortunately, every time his Government expresses its readiness to receive objective and professional teams to investigate the alleged use of chemical weapons, certain countries block such efforts; they know that the conclusions of the investigations would not satisfy their ill intentions against Syria.  These countries have ready‑made accusations and scenarios to justify their aggression.  Such was the case when the United States, France and the United Kingdom launched a wanton aggression on Syria in April, claiming, without evidence, that chemical weapons had been used.

He also said that the terrorist organization known as the “White Helmets” — created by British intelligence under a humanitarian cover — was the main tool used to mislead public opinion and fabricate accusations on the use of chemical weapons.  This organization is part of the Al‑Qaida‑affiliated Nusrah Front.  Despite all allegations, Syria remains committed to liberating all its territory without concern for the black banners of terrorists or the theatrics of the White Helmets.  Meanwhile, the Turkish regime continues to support terrorists in Syria.  It has trained and armed terrorists, turning Turkey into a hub and a corridor for terrorists on their way to Syria.  Israel continues to occupy a part of land in the Syrian Golan and Syrian people there continue to suffer because of its oppressive and aggressive policies.  Israel even supported terrorist groups operating in southern Syria.  He also strongly condemned the decision of the United States Administration to withdraw from the Iran nuclear agreement, which proves once again the United States’ disregard for international treaties and conventions.

The representative of Syria said false allegations made by Canada’s speaker are made in the framework of that country’s engagement with terrorist groups in Syria, notably the White Helmets, which are affiliated with the Nusrah Front. To promote the White Helmets is to promote terrorism and Al-Qaida, he said.