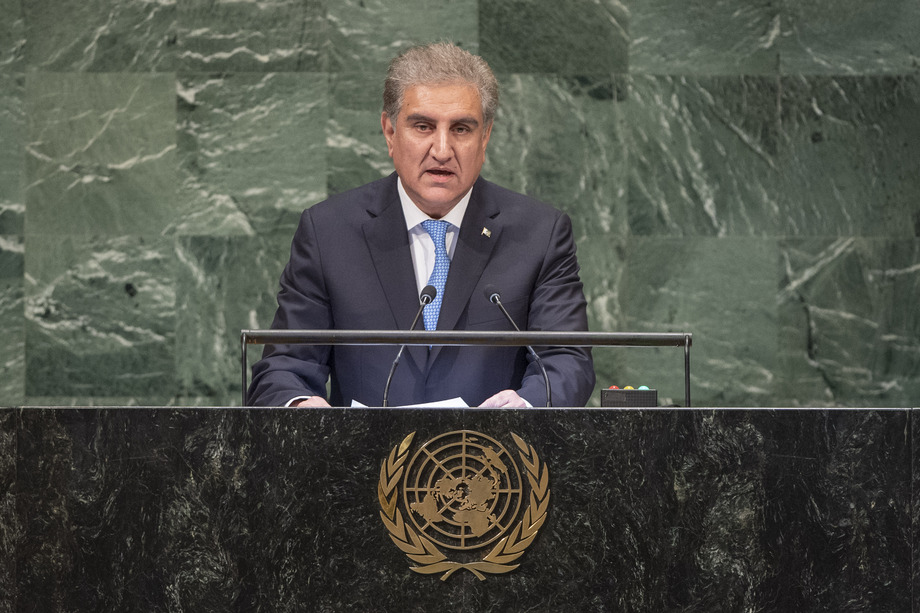 MAKHDOOM SHAH MAHMOOD QURESHI, Minister for Foreign Affairs of Pakistan, noting his country’s elections two months ago, said the people had voted for reform, opting for a compassionate, peaceful and principled Pakistan.  The Government is keen to pursue a policy of partnerships for peace and prosperity in its immediate neighbourhood and beyond.  A peaceful environment is necessary to promote the country’s development agenda, both at the national level and in the region.  Under the leadership of Prime Minister Imran Khan, integrated policies and programmes have begun shaping a new Pakistan.

Observing that forces of protectionism, populism and isolationism are gaining currency, he said that intolerance is ascendant over acceptance, rhetoric over reason and power over principle.  “Where the world needs bridges, we see fortifications,” he said, and “where it needs highways, we see blockades”.  New forms of imperialism are emerging and multilateralism is retreating.  The dark clouds of trade wars are looming larger on the horizon even as the challenges of climate change, environmental degradation, pandemics and transnational organized crime become more complex.

Pakistan desires a relationship with India that is based on sovereign equality and mutual respect, he stated.  Recalling that the two countries were to meet on the sidelines of the General Assembly to talk, he said that India called off dialogue for the third time.  “They preferred politics over peace,” he said, adding that for 70 years, the people of occupied Jammu and Kashmir have struggled for their rights to self‑determination in the face of oppression by the Indian occupation forces.  There can be no lasting peace in South Asia without a just settlement of the Kashmir dispute, based on Security Council resolutions and the will of the Kashmiri people, he stressed.  The recently released report of the Office of the United Nations High Commissioner for Human Rights (OHCHR) chronicles massive ongoing violations of human rights in Indian‑occupied Kashmir.

Turning to Afghanistan, he stressed that there is no military solution to the war in Afghanistan.  Pakistan will continue to support an Afghan-owned and Afghan‑led process of peace and reconciliation.  That country’s security has a direct spillover impact on Pakistan’s security.  For the past 17 years, Pakistan has been combating terrorism, and with the deployment of 200,000 troops, it has conducted the largest and most effective counter‑terrorism campaign in the world.  Further, Pakistan continues to face terrorism that is financed, facilitated and orchestrated by its eastern neighbour.  India, in plain sight of the international community, perpetrates State‑sponsored terrorism, he said, expressing hope for a new consensus on peace and security and development.

The representative of Pakistan, responding to his counterpart from India, said the breeding ground of terrorism in the region is actually in India. Providing several examples of Pakistan citizens who were victims of terrorism in occupied Jammu and Kashmir and other areas, he said that in the India of today there is no room for dissent, as is apparent as the country continues to face 17 domestic insurgencies. On the issue of occupied Jammu and Kashmir, he wondered whether India could deny the fact that more than 100,000 civilians have been killed. The truth is that occupied Jammu and Kashmir is not a part of India and never will be, and India could no longer hide its actions against civilians there.