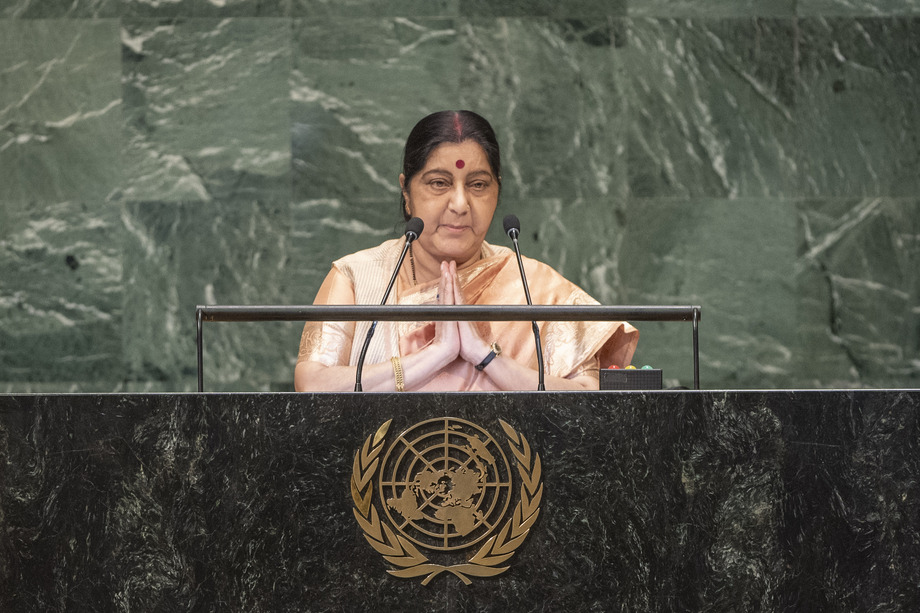 SUSHMA SWARAJ, Minister for External Affairs of India, highlighted how her country has initiated unprecedented economic and social transformations to achieve the Sustainable Development Goals.  India has implemented the world’s largest financial inclusion, health insurance and housing schemes — which will benefit millions — as well as entrepreneurship and skill development programmes.  These initiatives have at their core the welfare of women, she stressed, adding that, whereas some developed nations with big economies only offer six weeks of paid leave, women will get twenty‑six weeks under a new national scheme.

Underdeveloped and developing nations are the worst victims of climate change, she continued, underscoring that “those who have exploited nature for their immediate needs cannot abdicate their responsibilities”.  Developed nations must lift the deprived with financial and technical resources.  The principle of common but differentiated responsibilities and respective capabilities was reiterated in the 2015 Paris Agreement.  India has risen to the challenge, notably by launching the International Solar Alliance in partnership with France.  The Alliance is now comprised of 68 members.

Terrorism, which represents the second existential threat to humanity, is bred across India’s border to the west, she said, adding:  “Our neighbour’s expertise is not restricted to spawning grounds for terrorism; it is also an expert in trying to mask malevolence with verbal duplicity.”  The fact that Osama bin Laden, the architect of the 11 September 2001 attacks, was given safe haven in Pakistan is evidence of this.  Challenging the idea that India is sabotaging peace talks, she said that such talks had begun many times and that if they stopped, it was only because of Pakistan’s behaviour.  Her country accepted Pakistan’s proposal of a meeting between the two countries’ Foreign Ministers in New York.  But, soon after, terrorists killed three of her country’s jawans [junior soldiers], she recalled, questioning the idea that this could indicate a desire for dialogue.  Further, Pakistan accuses India of violating human rights.  Yet, “those who take innocent lives in pursuit of war by other means are defenders of inhuman behaviour, not of human rights”, she said.

She reaffirmed the need to bring terrorists to accountability through international law and, underscoring that India proposed a draft document on the comprehensive convention on international terrorism at the United Nations in 1996, she called on the General Assembly to come to an agreement on this accord.  The League of Nations went into meltdown because it was unwilling to accept the need for reform.  The United Nations must not make that mistake, she said, urging those present to “change the Institution’s head and heart to make both compatible to contemporary reality”.

The representative of India, responding to comments made by her counterpart from Pakistan, rejected a number of allegations made against her country. The “new” Pakistan is not much different from the past, she said. Fake allegations and fake facts are counterproductive, she said, adding that Pakistan must make moves towards ending its misinformation and choosing a new path based on the truth.