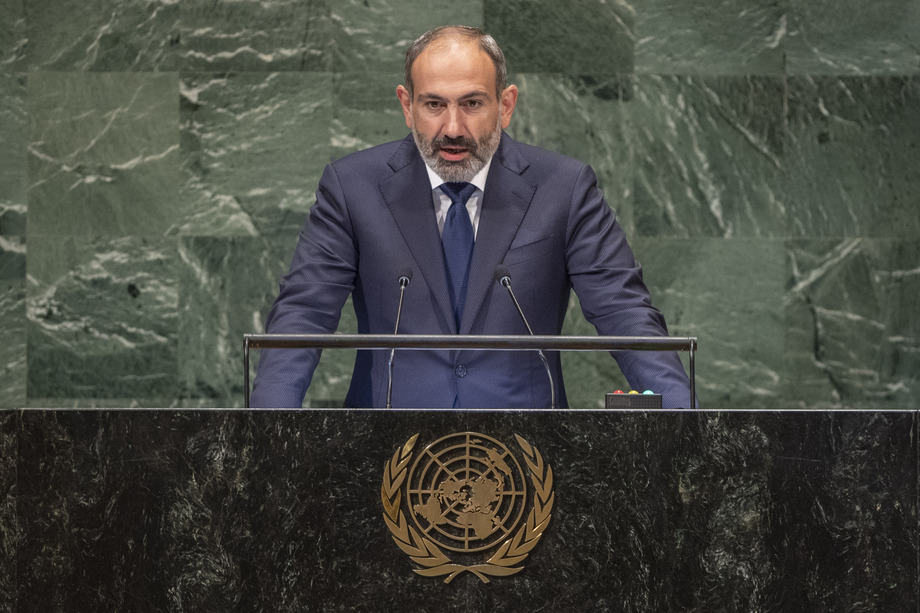 NIKOL PASHINYAN, Prime Minister of Armenia, first took a moment to share the story of victory over the authoritarian rule during his country’s “Velvet Revolution”.  The people of Armenia succeeded in an unprecedented revolution, without any violence.  This was not a coincidence, he noted, and said:  “Our intention was to make a revolution of love and solidarity.  From the very beginning we declared that we ruled out any violence,” he said.  “Our response would be with raised and open hands, smiles and love.”

He noted that when starting out the political process, there were only dozens marching from the second biggest city, Gyomri, to the capital Yerevan.  Upon reaching Yerevan and showing determination and devotion to non-violence, the entire nation rose against the ruling regime, winning without a single victim or gunshot, only through peaceful demonstrations.

“Against all odds, I was elected Prime Minister,” he said, adding that it was possible because people were firm in their demand that the Parliament had to follow the people’s will.  He said that today, however, that Parliament does not represent our people’s will as it was elected through massive vote buying and oppression.

“Free, fair and transparent elections will become an irreversible reality in Armenia,” he said.  He noted the establishment of a new governance system, which is named people’s direct rule, something that will be institutionalized through elections, referendums and engagement of people in the decision-making process.

Despite the radical transformations in internal political life, the foreign policy agenda does not have U-turns, he continued.  Armenia stands ready to have constructive dialogue with all partners.  He noted the Armenian community in Syria that faces an existential threat from the ongoing crisis, and that his country has contributed humanitarian assistance.

The representative of Armenia, responding to those comments, said there is no conflict between his country and Azerbaijan. The conflict is in fact between Nagorno-Karabakh and Azerbaijan. Summarizing the history of the region, he said Azerbaijan had attacked the population of Nagorno-Karabakh, which eventually won the war and declared its independence. The aggressor is really Azerbaijan, he said, emphasizing that everything his counterpart just said is false. The words do not correspond to realities on the ground. It is important to avoid debating the issues here, he said, stressing that Azerbaijan should seriously engage in the peace process to find a negotiated solution.

The representative of Armenia said details about who attacked whom first must be known, inviting Member States to read newspapers from 30 years ago and not ones published today. The Council did use its power to stop the hostilities that occurred. However, today, visitors to Nagorno-Karabakh are being blacklisted by Azerbaijan authorities, who are limiting their freedom of movement. Nagorno-Karabakh has ratified all major United Nations conventions and will be presenting its voluntary national review on its Sustainable Development Goals progress. Raising concerns about threats by ISIL fighters to travel to Nagorno-Karabakh for a conflict, he said resolving the conflict occurs through a negotiated format.

The representative of Armenia condemned Azerbaijan’s lopsided interpretations of international law and references to United Nations resolutions. The right of return for refugees requires a comprehensive approach. Azerbaijan is pursuing a military solution to the Nagorno-Karabakh conflict, raising tensions in the region and against the Nagorno-Karabakh people. The conflict erupted as the result of Azerbaijan’s denial of their right to self‑determination. Armenia supports peaceful negotiations towards a lasting and comprehensive solution and hopes Azerbaijan will commit in good faith to previously negotiated agreements.