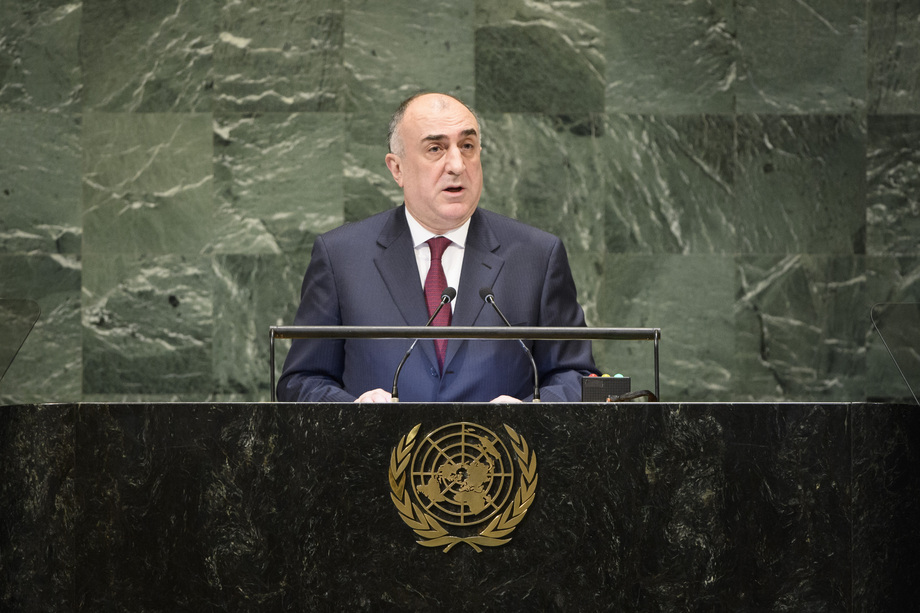 ELMAR MAHARRAM OGLU MAMMADYAROV, Minister for Foreign Affairs of Azerbaijan, said coordinated efforts and shared responsibilities backed by adequate resources are essential to secure a sustainable and inclusive future for all.  Azerbaijan has adapted its national development strategy considering the Sustainable Development Goals, and consistently aims to improve life for its citizens with a poverty level at 5.4 per cent and unemployment at 5 per cent.  His country promotes regional development through connectivity, such as the establishment of an East-West transportation corridor, which saves time for moving goods between Asia and Europe.  Azerbaijan also initiated a transnational broadband project called the Trans-Eurasian Information Super Highway that will lay a fibre optic line between Hong Kong and Frankfurt and has nominated Baku to host the World EXPO2025.  Beyond national development, his country is also committed to humanitarian assistance.

Education and health care are top domestic policy priorities for Azerbaijan, he went on to say, also emphasizing the importance of fighting corruption and promoting human rights.  Azerbaijan is one of the world’s centres of peaceful multiculturalism and it seeks to promote those values globally through the hosting of international events.  In that regard, he spoke of the Baku Process, launched in 2008, with the goal of strengthening partnership and cooperation between the Muslim world and Europe.  He also announced that Azerbaijan will take over chairmanship of the Non-Aligned Movement in 2019.

The ongoing armed conflict between Armenia and Azerbaijan still represents a major threat to international and regional peace, he said.  Citing the relevant Security Council resolutions, he said the 15-nation organ had acknowledged an obvious violation of sovereignty and territorial integrity of Azerbaijan yet no resolutions had been implemented.  On the contrary, Armenian policy and practices indicate its intention to secure the annexation of Azerbaijani territories, he said.  The Prime Minister of Armenia regards the Nagorno-Karabakh region as part of Armenia, contrary to international law and Council resolutions, he said.  He could not exclude that the latest statements and actions by the Prime Minister of Armenia are aimed at escalating the situation, he said, calling on the international community to exert pressure on Yerevan to comply with international law.

Armenia has consistently obstructed the conflict-settlement process and refuses to conduct result-oriented negotiations, he said.  An economically developed and prosperous Armenia is not possible without peace and respect for the sovereignty and territorial integrity of its neighbours, he remarked, imploring the that country’s new leadership to act in accordance with the rule of law and democratic values.

The representative of Azerbaijan, speaking in exercise of the right of reply, expressed concern about comments made by the Prime Minister of Armenia on 25 September. Pointing out that Armenia used military force to seize a part of Azerbaijan and set up a regime there, he said tens of thousands were subsequently killed and hundreds went missing. In fact, the Security Council adopted resolutions addressing those actions as well as related territorial claims, facts Armenia’s Prime Minister failed to mention. All statements by that country’s leadership about democracy will remain preposterous until it took concrete steps to rectify the situation in the Nagorno-Karabakh region.

The representative of Azerbaijan said the false statements just made reflect a policy of lies. The Security Council has ruled on the reality on the ground, he said, noting that Armenia rejected the demands of the 15-nation organ. Armenia’s allegations are baseless and leave no doubt who is responsible for the continued hostilities. It is well known that Armenia occupies the Nagorno-Karabakh region, he said, inviting his counterpart to comment on efforts to implement the Sustainable Development Goals. “They are silent on that matter because they have nothing to say,” he said, highlighting that as soon as the conflict is resolved, the people will be able to benefit from peace and stability.

The representative of Azerbaijan emphasized that the Nagorno‑Karabakh region remains an integral part of Azerbaijan and accused Armenia of resorting to violence and terrorism. Armenia continues to occupy the Nagorno‑Karabakh region against United Nations resolutions and international law. Armenia’s policies are discriminatory based on ethnic grounds. Furthermore, the actions that Armenia described as an exercise of self‑determination have been qualified by the Security Council as the unlawful use of force. The international community has reaffirmed the sovereignty of the recognized borders of Azerbaijan. Armenia has obstructed the conflict settlement process, while escalating the situation on the ground.