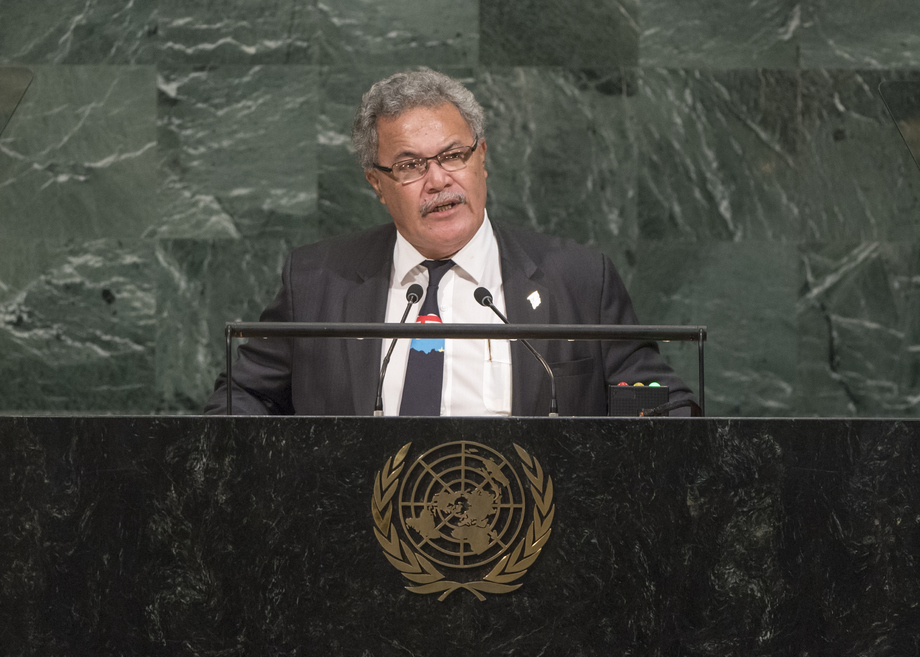 ENELE SOSENE SOPOAGA, Prime Minister of Tuvalu, expressed concern with the threat posed to global peace and security by the Democratic People’s Republic of Korea, saying that a military response would lead to unimaginable destruction and loss of life.  Diplomacy was the only option to solve the crisis, he said, noting that Tuvalu on 20 September signed the Treaty on the Prohibition of Nuclear Weapons as part of its commitment to the South Pacific Nuclear Free Zone Treaty.

The Paris Agreement was Tuvalu’s hope for security and survival, but the decision by the United States to abandon that instrument risked undermining global efforts to save and protect tens of millions of people at risk from climate change, he said.  Short-term domestic economic and political interests that benefited the few should not be pursued at the expense of a decent life for all.  He welcomed the Secretary‑General’s intention to convene a climate summit in 2019 and called for climate change to be a permanent agenda item for the Security Council.

Under current warming trends, Tuvalu might be submerged into the sea within the next 50 years, he said.  Its people — who had contributed the least to global warming — would be forced to abandon their islands.  Such displacement had yet to generate international concern, despite its potential for threatening global peace, security and human rights.  Moreover, current refugee regimes did not adequately protect those forced to leave their homes by the impact of climate change.  He proposed a United Nations resolution to establish a legal process to protect the human rights and lives of those displaced by climate change.

As a least developed country and a small island developing State, Tuvalu needed enhanced global support to implement the 2030 Agenda, he said, noting its development of a national strategy for sustainable development.  Graduation from least developed country status must only come when the State concerned could achieve sustainable development, not when it should be able to do so.  Ongoing discussions on the conservation and sustainable use of marine biological diversity beyond areas of national jurisdiction must ensure financial and technical support for small island developing States.  He went on to say that “Taiwan” should be allowed its fundamental right to participate in the United Nations system.  The United Nations must also be involved in addressing the issue of self-determination for the people of West Papua, he said.

Speaking in exercise of the right of reply, the representative of Indonesia responded to Tuvalu.