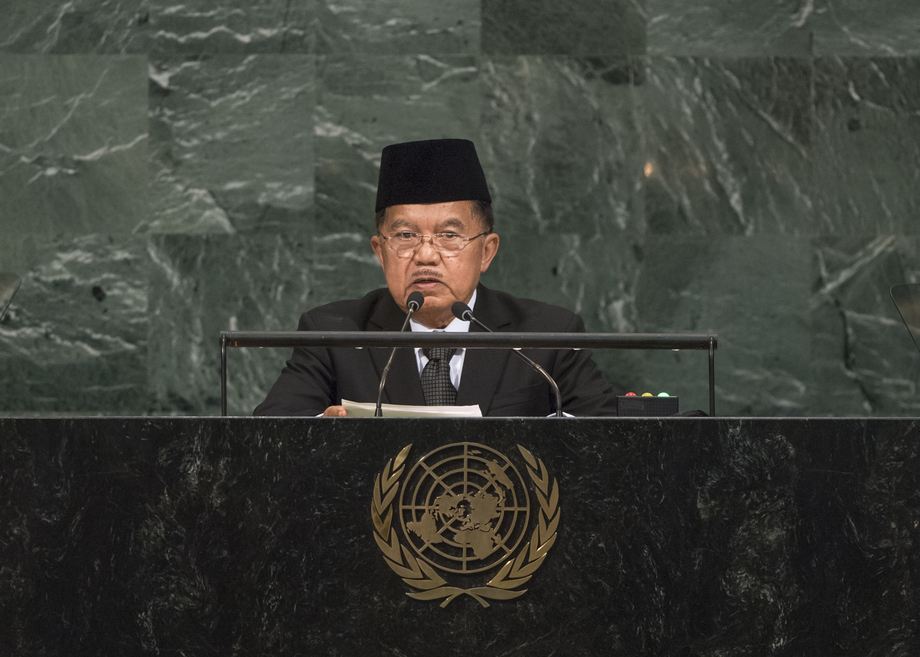 Mr. JUSUF KALLA, Vice-President of Indonesia, said peace was never a given, but must be developed and nurtured.  “We must work towards creating a global ecosystem of peace and stability,” he said, emphasizing that such an effort would require dialogue, inclusiveness, the peaceful settlement of disputes and the non-use of force.  Emphasizing Indonesia’s contribution to United Nations peacekeeping, and its membership in the Peacebuilding Commission, he said his country would always be ready to be part of a global solution to conflicts.  Sustainable peace required a global culture of prevention, he said, underscoring the importance of a strong partnership between the United Nations, regional organizations and national Governments.

Palestine was at the heart of Indonesia’s foreign policy, he said, calling for a fresh, sustainable and innovative approach that would bring about a two-State solution.  A decent life for all people must be a global goal, with synergies between sustaining peace and the development agenda.  Global commitments including the Sustainable Development Goals and the Paris Agreement must be translated into concrete action, with adequate funding, technical assistance, capacity-building and technology transfers for least developed and developing countries.  It was also important to support regions such as Africa, which had huge potential and which had undertaken great reforms towards sustainable development.

Synergy between sustaining peace and the development agenda also required a society that was just, inclusive and respectful of human rights, he continued.  There should be no man-made humanitarian crises.  Indonesia shared the international community’s concern about developments in Rakhine State, he said, adding that his country had proposed a “4+1” formula to the Government of Myanmar, placing the needs and welfare of the people at the centre.  He called for immediate access to humanitarian assistance and implementation of the recommendations of the Advisory Committee on Rakhine State.

Despite what the sceptics believed, climate change was real, he said.  With more than 17,000 islands, Indonesia was feeling the impact of changing weather patterns and rising sea levels.  Climate change would affect Indonesia’s sustainable development and even its survival.  He said his country was fully committed to the Paris Agreement and called on all countries to implement their obligations under that instrument.  Turning to terrorism, he said the key to tackling it was through addressing its root causes, including extreme poverty, illiteracy and massive youth unemployment.  Indonesia used a combination of hard and soft powers to address terrorism, radicalism and violent extremism, including a comprehensive programme to de-radicalize and reintegrate those who had “gone to the dark side”.  In an age of social media, terrorism was like a fast-spreading cancer that could only be eradicated through global cooperation and a comprehensive approach, he said.

The representative of Indonesia, responding to concerns by the representatives of Vanuatu and Solomon Islands concerning Papua and West Papua, and echoed by Tuvalu and Saint Vincent and the Grenadines, said their false allegations were economically motivated.  Those countries were “blindfolded” and refused to understand that the provinces had enjoyed great strides in economic growth and development.  They were growing at 9.21 per cent, the fastest in Indonesia, and remained integral and sovereign parts of her country.  Those making such claims were motivated by individuals with separatist agendas to exploit the issue of human rights, she said, asking why those concerns — if accurate — had not been raised in the appropriate forum of the Human Rights Council.  Stressing that those countries’ own human rights records were not perfect, she said illegal attempts to dismember the sovereignty and territorial integrity of a Member State violated the principles enshrined in the United Nations Charter.  “We cannot let this happen.”