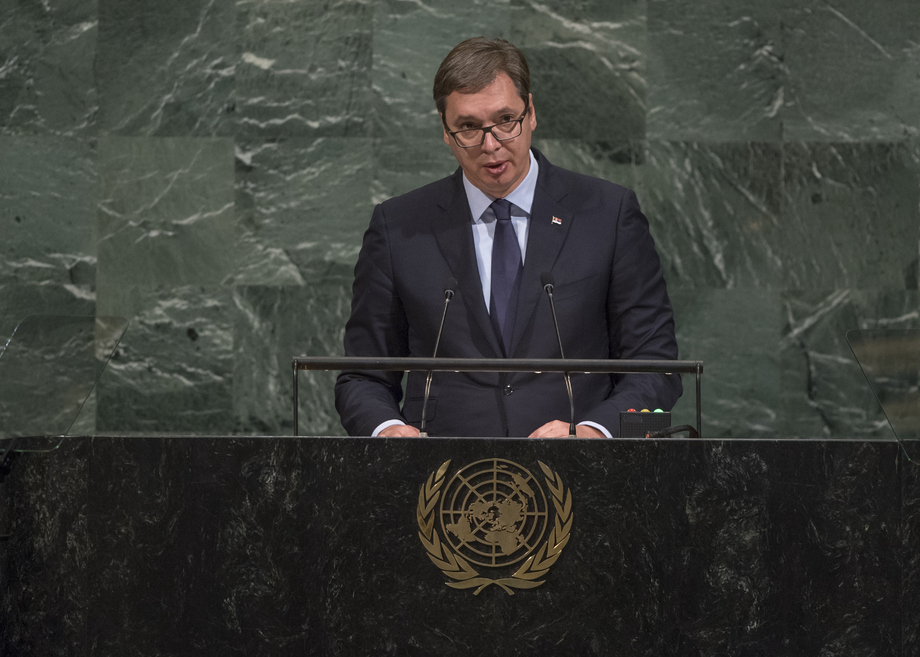 ALEKSANDAR VUČIĆ, President of Serbia, said that, while some leaders had taken the podium to accuse others, “I will do my best to avoid such an approach”.  Instead, he would speak about Serbia, its people and its re-entry into the world.  The country was trying to understand the world, even if sometimes it did not agree with its great Powers.  “Unlike some leaders, I have no need to patronize my people or run an election campaign from the Assembly’s podium,” he stressed.  Outlining a number of conditions to ensure a prosperous future for all countries of the Balkans, he pointed first to the maintenance of peace and security in the region, “no matter what”.  Economic growth and social reforms were also prerequisites, he said.

In that vein, he said, Serbia had demonstrated that with responsible politics or fiscal consolidation — even without huge privatization incomes — a country could have a budget surplus, reduce unemployment and create a flexible labour market.  Belgrade had also bolstered its investments in young people, including in technological fields.  Within the region, Serbia based its relations on mutual trust and respect, he said, adding that reaching a political solution on the issue of Kosovo and Metohija was of paramount importance.  While Belgrade did not recognize Kosovo’s unilateral declaration of independence, it had worked to resolve that situation peacefully.  The gains achieved through the European Union‑facilitated dialogue in Brussels were the result of difficult compromises and concessions on both sides, but mostly by Serbia, demonstrating the country’s constructiveness and commitment to dialogue.  He called on the international community to block Kosovo’s bid to join the United Nations Educational, Scientific and Cultural Organization (UNESCO), noting that it had taken part in the destruction of many Serbian cultural sites.

“Serbs are more than eager to continue with successful economic reforms” and the creation of a regional economic zone, “which we will not give up on”, he said.  “Today, we are too small as individual markets to have better and more prosperous performance.”  The establishment of a unique customs zone and tax system was the future of the region.  Equally important was Serbia’s path towards European Union membership, he said, noting that the bloc was his country’s most important trade and investment partner.  “We all want to be a part of the European Union, but sometimes people in the Balkans and people in Serbia are treated in an unfairly different manner than those who had embarked that boat earlier,” he said.

Emphasizing that Serbia would never abandon its policy of military neutrality, he said that while striving towards European Union membership and strengthened relationships with Western countries, it also cherished the best possible relations with the Russian Federation and China.  “We’ll always stand ready to observe developments in today’s world, not by judging superficially what is right or wrong, or what is just or unjust,” he said, adding:  “We have never threatened anybody nor will we.”  Serbia would always dare to condemn “if somebody, by launching only a single missile”, forced inhabitants of a Japanese island to spend the night in shelters.  Likewise, Serbia stood in solidarity with Syrian, Afghan, sub-Saharan and other refugees, and would not relent in confronting terrorism and radical Islamic movements such as Islamic State in Iraq and the Levant (ISIL/Da’esh) or Al-Qaida.

Underscoring the importance of fighting poverty and social inequality — especially in the context of preventing radicalism and extremism — he said the integration of all citizens of all religions and political or other affiliations into modern society based on common values was critical, “but with respect for right to identity, and respecting everybody”.

The representative of Serbia, speaking in exercise of the right of reply, said the Prime Minister of Albania had used his statement to call on Member States to recognize Kosovo as an independent State.  He also misled Member States by contending that the ongoing dialogue in Brussels between Belgrade and Pristina was between Serbia and Kosovo.  Such interventions risked jeopardizing that dialogue.  Kosovo was not an independent State nor was it a Member State of the United Nations, she said, adding that Serbia would use all diplomatic means to preserve its sovereignty and territorial integrity.

Speaking in exercise of the right of reply, the representative of Albania responded to Serbia.