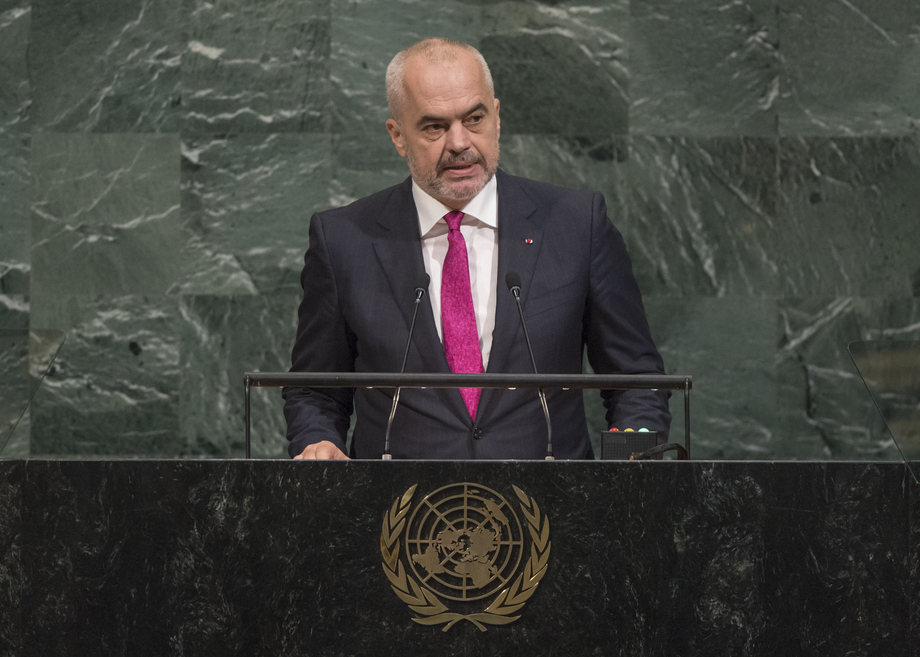 EDI RAMA, Prime Minister of Albania, said that global terrorism and extreme radicalization had become a persistent threat with the ability to strike everywhere.  Several brutal conflicts continued to devastate the lives of millions of people and threaten the future of entire generations.  Armed conflicts were greater in complexity, and weapons and tactics used had become more sophisticated.  The consequences were greater, too, with millions uprooted from their homes.  Climate change, a defiant truth that some still dared to question, was putting survival at risk.  It was one of the most fundamental challenges of the twenty‑first century, and continued to cause humanitarian distress.

The international global order had been seriously challenged without anything credible to replace it, he said.  The situation in South-East Asia, a prolonged and recently exacerbated crisis sparked by policy of “a stubborn totalitarian and paranoid regime”, had brought back the fear of nuclear confrontation.  Inequality had continued to rise while the world became wealthier.  No country, however big, rich or powerful, could face or solve these problems alone.  Such challenges required a unified vision and a concerted reaction, he said, and reiterated Albania’s pledge to do its part.  Albania was among the first countries to join the global coalition in the fight against Islamic State in Iraq and the Levant (ISIL/Da’esh) and international terrorism.

Albania, he continued, was fully committed to protecting and promoting all human rights, in particular women’s rights.  For the first time in the country’s history, half of the members of its Government were women.  The empowerment of women served as a powerful drive for overall economic development and national prosperity.

One of Albania’s main priorities was to join the European Union, he said.  It was resolved to deliver on the fundamentals that would consolidate the pillars of a democratic State, functioning economy and a Government that worked for its citizens.  He expected European Union partners to do their part in turn and clear the way towards opening accession talks.  He hoped that the European Union would continue to believe that the enlargement process remained the best European catalyst for peace, security, development and prosperity.

One of the pillars of Albania’s foreign policy was the development of regional cooperation and the transformation of the Western Balkans into an area of free movement of people, goods, capital and ideas, he said.  The best proof of the profound change in the Western Balkans could be found in its joint efforts with a shared sense of responsibility and common purpose to make the region a natural part of Europe.  To have a fully functioning region, all members needed to be treated the same way.  That was why the admission of Kosovo at every regional body with equal rights was of paramount significance, he stressed.

Speaking in exercise of the right of reply, the representative of Serbia responded to Albania.

The representative of Albania, speaking in exercise of the right of reply, said Kosovo had been an independent State since 2008, recognized by 114 countries.  It had established and strengthened its worldwide geopolitical identity, it participated in all regional initiatives in South-East Europe and it was working towards European Union membership.  Albania was convinced that the United Nations and other international organizations would only benefit from Kosovo’s presence and contribution.  Albania supported the European Union-facilitated dialogue between Kosovo and Serbia and encouraged both countries to work towards a full normalization of relations.