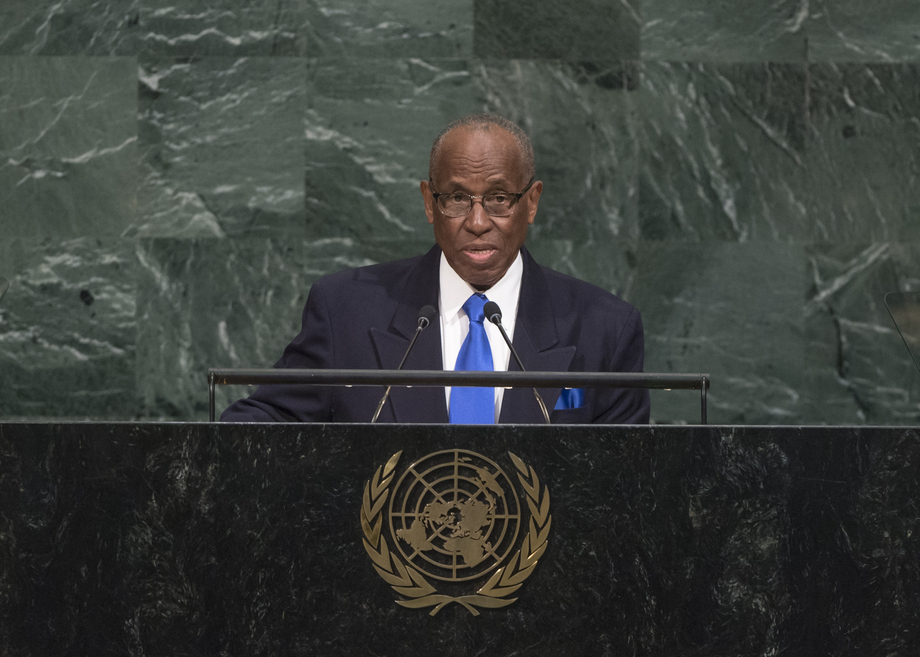 LOUIS STRAKER, Deputy Prime Minister of Saint Vincent and the Grenadines, said the death and destruction wrought by the 2017 hurricane season was the very manifestation of climate change, and it was a “bare-faced insult to the intelligence and experience of the peoples of island States and coastal areas to call climate change a hoax”.  Small island developing States were the most vulnerable to climate change, yet they contributed least to the emissions that caused it, he pointed out, demanding that those contributing the most emissions do the most to mitigate its effects and assist others.  The global community had come together to craft the Paris Agreement, he said, adding that his country viewed any attempt to disavow its commitments as an “act of hostility”.

He went on to state that numerous Caribbean States required assistance in terms of relief and long-term reconstruction, and that assistance must be concessional and free from “antiquated notions” of per capita GDP.  To that end, Saint Vincent and the Grenadines called for a donors’ conference to address those challenges.  Caribbean territories with special relationships to colonial Powers were in desperate need of assistance and had limited options for international cooperation, given their political status, he said.  Saint Vincent and the Grenadines had sent assistance and technical expertise to those territories, he said, while calling upon administering and colonial Powers, as well as potential donors, to assist in their recovery and rehabilitation.

Turning to armed conflict, he emphasized that human suffering in Syria, Yemen and Myanmar demanded greater international attention and action.  Similarly, threats posed by tensions on the Korean Peninsula, the Gulf States and the State of Palestine required persistent and prioritized diplomacy.  Frustration with the pace of negotiation and mediation should not lead to quick military fixes of political problems, or interpretations of sovereign self-interest that justified trampling the sovereignty of other States, he stressed.  Saint Vincent and the Grenadines was alarmed by “interventionist” threats against Venezuela’s sovereignty by the United States and the Organization of American States, he said, underlining also that any threat against Cuba would be an “anachronistic throwback to cold war posturing without any logical justification”.

He said his country had been honoured to host the 2017 Caribbean Regional Seminar on Decolonization, but the “inconvenient truth” was that the decolonization process remained incomplete, including in West Papua.  Intensified efforts would be essential to realizing full self-government and absolute political equality, he emphasized.  On improving the United Nations, he reiterated the need for a reformed Security Council with expanded permanent membership, a special voice for island States and radically revised working methods.  The General Assembly and Economic and Social Council must consider reforms to the international financial architecture, in particular the Bretton Woods institutions.

Saint Vincent and the Grenadines placed climate change at the centre of national development strategies and implemented many regulations and investments to that end, he said, adding that realizing the Sustainable Development Goals would require international cooperation and commitment.  He highlighted the international campaign to secure reparations from the former colonial Powers which would assist in development.  He also called for addressing the Dominican Republic’s denial of citizenship for people of Haitian descent during the cholera epidemic caused by United Nations peacekeepers in their country; the legitimate incorporation of Taiwan into the United Nations; and recognition of the national rights of the Palestinian people.

Speaking in exercise of the right of reply, the representative of Indonesia responded to Saint Vincent and the Grenadines.