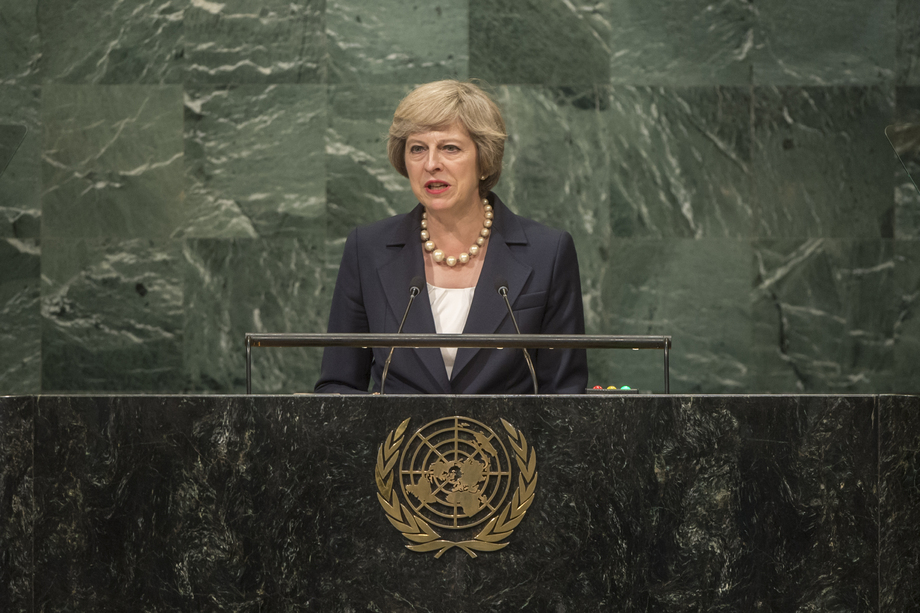 THERESA MAY, Prime Minister of the United Kingdom, addressed the General Assembly for the first time, saying that her country would be a “confident, strong and dependable partner internationally”, true to shared universal values.  It would honour its commitment to devote 0.7 per cent of GDP to development assistance, remain a steadfast permanent member of the Security Council and make a leading contribution to United Nations peacekeeping.  The United Kingdom would complete domestic procedures to enable ratification of the Paris Agreement on climate change before the end of 2016 and would strengthen partnerships for resolving conflicts around the world.

In order to tackle today’s big security and human rights issues, the United Nations must forge a bold new multilateralism, she said, adding that the Organization must modernize in order to meet the challenges of terrorism in the twenty-first century.  Noting that the 65 million forcibly displaced people around the world equalled her country’s entire population, she emphasized that countries must be able to exercise control over their borders.  Refugees should claim asylum in the first safe country they reached, and there should be better ways to distinguish between refugees and economic migrants.  A better overall approach to managing economic migration was also needed as well, she said, adding that by ensuring managed and controlled international migration, isolationism and xenophobia could be rejected.

Turning to modern slavery, she said her Government was creating a task force to coordinate efforts against such cruel exploitation.  It was also setting up a dedicated fund for high-risk countries whose citizens were trafficked to the United Kingdom.  However, in order to eradicate modern slavery, security relationships must be developed among countries.  Stressing that the United Kingdom had always been at the heart of international efforts to secure peace and prosperity, she said that the British people, in leaving the European Union, had not voted to turn inwards or to walk away from its world partners.  More global action was needed, “so this is not the time to turn away from our United Nations”, she said.  “It is time to turn towards it.”

Speaking in exercise of the right of reply, the representative of the United Kingdom, referring to the statement of the Prime Minister of Mauritius, said her Government was in no doubt about its sovereignty over the Chagos Archipelago. The United Kingdom did not consider the International Court of Justice to be the appropriate way to resolve the issue, she said, adding that the United Kingdom would continue to engage bilaterally with Mauritius.