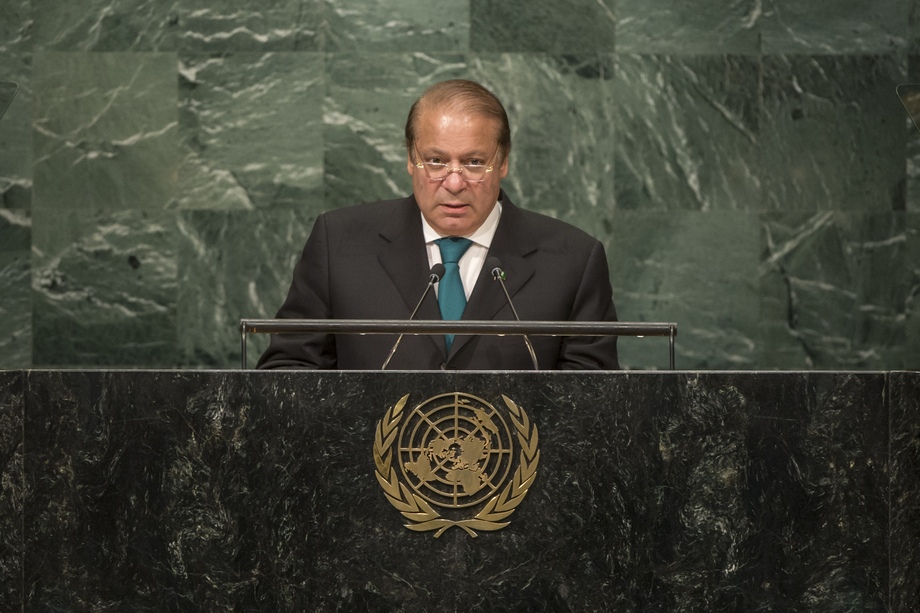 MUHAMMAD NAWAZ SHARIF, Prime Minister of Pakistan, said that his country’s successful implementation of the 2030 Agenda hinged on internal peace and stability.  However, tens of thousands of Pakistani citizens had been killed or injured in attacks by terrorist networks, funded by external sources.  Despite those losses of human life, his country had successfully pursued targeted operations against terrorists, enabling Pakistan to “turn the tide against terrorism”.

On a global scale, the same efforts to counter terrorism should be conducted multilaterally and “not by the passage of laws with extraterritorial application targeted against certain countries”, he said, adding that the war in neighbouring Afghanistan had presented momentous economic and security challenges to his country, which hosted 3 million Afghan refugees.  He iterated that the only path to a lasting peace, and for those refugees to return home, was a dialogue between the Government in Kabul and the Afghan Taliban.

Turning to his country’s conflict with India, a normalization of relations could only be realized with a resolution of the Kashmir dispute.  India’s occupation forces continued to repress Kashmiris.  His Government would share with the Secretary-General a dossier containing detailed information and evidence of gross and systematic violations of human rights committed by those forces.  Pakistan supported the Kashmiri people’s demand for self-determination, as promised to them by several Security Council resolutions.  The United Nations should work to demilitarize Jammu and Kashmir in dialogue with India, Pakistan and the Kashmiri people.  Pakistan was not engaged in an arms race with India, he said, but added:  “We cannot ignore our neighbour’s unprecedented arms build-up and will take whatever measures necessary to maintain credible deterrence.”

India First Right of Reply  (in all available languages)

Pakistan First Right of Reply (in all available languages)

Exercising her right of reply, the representative of India stated that Pakistan had a long-standing policy of sponsoring terrorism.  Only a few days prior, the international community had honoured again the victims of 11 September, the trail of which had led all the way to Abbottabad.  While Pakistan preached of human rights and self-determination, it established itself as the global epicentre of terrorism, a terrorist state which diverted money to train terrorist groups as militant proxies against its neighbours.  Terrorist entities and their leaders, including many designated by the United Nations, continued to roam the streets freely in Pakistan, operating with State support and raising funds openly.  India stood firmly resolved to protect its citizens from all acts of terrorism in Jammu and Kashmir.  “We cannot allow terrorism to prevail,” she said.

In response, the representative of Pakistan said that the dispute of Jammu and Kashmir could not be “wished away”. His country would continue to stand by the people of that region, and extend diplomatic support to their movement. The recent “cold-blooded murder” of Burhan Muzaffar Wani had sparked spontaneous protests, but those peaceful protesters were mercilessly fired upon, blinded and critically injured. The right to self-determination that had been promised them through a series of Security Council resolutions had still not been realised, but time had weakened neither their resolve nor their aspirations. The people of Indian-occupied Kashmir should be allowed to hold a free and fair plebiscite to enable them to decide their future. No amount of verbiage could obfuscate that reality.

Pakistan Second Right of Reply (in all available languages)

India Second Right of Reply  (in all available languages)

The representative of Pakistan said that the Minister from India had used a litany of falsehoods and a travesty of the facts in her remarks.  The Government of Pakistan rejected all the baseless allegations in her statement that were intended to deflect global attention from the actions of Indian forces in killing, blinding or injuring innocent Kashmiri women and children.  Demanding a full United Nations investigation into human rights violations in Kashmir, he said the Organization should be allowed unfettered access to the state – which never was and never could be part of India – for that purpose.  Kashmir’s struggle for the right to self-determination was legitimate and it had a right to moral and political support from the international community, he said, adding that India had long been a sponsor and practitioner of State terrorism against all its neighbours, including Pakistan.  It had also armed and supported individuals listed under United Nations sanctions.

The representative of India said that her counterpart from Pakistan had made fanciful and misleading statements, but no attempt to answer questions posed by the international community.  She asked how that country could allow terrorist havens to continue flourishing, and whether its representative could confirm that her country did not use terrorist proxies as a matter of State policy.  A State built upon atrocities against its own people could not talk about human rights, she emphasized.  India rejected such sermons, and asked whether Pakistan could deny that its armed forces had committed genocide in 1971 or that it had repeatedly used artillery against its own people.  It appeared that Pakistan’s representative had not heard the Indian Minister earlier, when she had said that Jammu and Kashmir was an integral part of India and always would be.

Pakistan Third Right of Reply (in all available languages)

India Third Right of Reply (in all available languages)

The representative of Pakistan said his Government rejected all claims and fabrications in India’s remarks.  Regardless of how many times a lie was repeated, it could not become truth, he emphasized.  Kashmir remained a disputed territory and any claims against it were contrary to the principles of international law.  India’s attempts to decimate Kashmir’s population and its sabotage activities were well-documented facts.

The representative of India said his country would remain silent, adding that the Pakistan’s deception, deceit and denial were only to be expected.