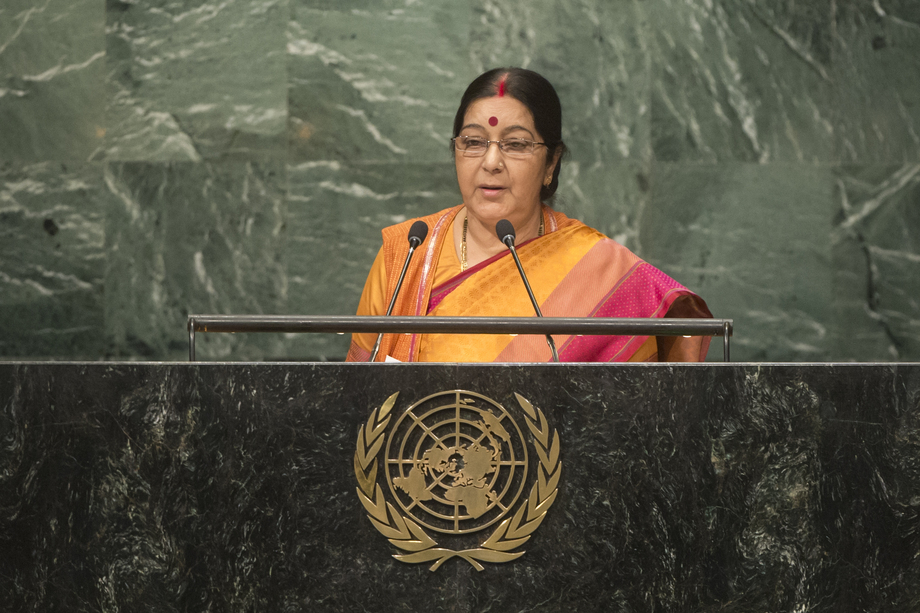 SUSHMA SWARAJ, Minister for External Affairs of India, noted that much had changed in the world over the past year, and the international community must remember that it would be defined not just by its actions, but equally by its inaction.  “The true challenge of our time is to end the curse of harsh poverty that still lurks in so many corners of our world,” she said.  It was critical to ensure that the fruits of growing prosperity reached those who needed them most, in order to take forward the mission of gender equality and to ensure peace across borders.  Noting that one sixth of humanity lived in India, she said the success of the 2030 Agenda for Sustainable Development therefore depended on the success achieved in her country.  To confront the challenges posed by climate change, the Prime Minister had championed the concept of “climate justice”, which recognized the principles of common but differentiated responsibility and respective capabilities.  Developed nations must discharge their responsibility in ensuring the common good by providing financing and technology transfer, she said, adding that India would continue to play a leading role in combating climate change.

Recalling that the recent fifteenth anniversary of the 11 September 2001 terror attacks on the United States, she said that, despite the blood and tears of innocent victims, attacks had continued in Kabul, Dhaka, Istanbul, Mogadishu, Brussels, Bangkok, Paris, Pathankot and Uri in 2016 alone.  Barbaric tragedies also continued daily in Syria and Iraq.  Describing terrorism as the largest violation of human rights and a crime against humanity, she said “history proves that those who seed extremist ideologies reap a bitter harvest”.  Humankind must unite across its differences, add steel to its resolve and inject urgency into its response, she emphasized.  Any nation that refused to join that global strategy must be isolated.  “In our midst, there are nations that still speak the language of terrorism,” she said, warning that countries must be held to account for sheltering terrorists.  She recalled that on 21 September, the Prime Minister of Pakistan had levelled baseless allegations of human rights violations against her country and that India had put in place unacceptable preconditions for dialogue.  Both accusations were untrue, she said, stressing that Jammu and Kashmir was an integral part of India and would always remain so.

India First Right of Reply (in all available languages)

Pakistan First Right of Reply (in all available languages)

Exercising her right of reply, the representative of India stated that Pakistan had a long-standing policy of sponsoring terrorism.  Only a few days prior, the international community had honoured again the victims of 11 September, the trail of which had led all the way to Abbottabad.  While Pakistan preached of human rights and self-determination, it established itself as the global epicentre of terrorism, a terrorist state which diverted money to train terrorist groups as militant proxies against its neighbours.  Terrorist entities and their leaders, including many designated by the United Nations, continued to roam the streets freely in Pakistan, operating with State support and raising funds openly.  India stood firmly resolved to protect its citizens from all acts of terrorism in Jammu and Kashmir.  “We cannot allow terrorism to prevail,” she said.

In response, the representative of Pakistan said that the dispute of Jammu and Kashmir could not be “wished away”. His country would continue to stand by the people of that region, and extend diplomatic support to their movement. The recent “cold-blooded murder” of Burhan Muzaffar Wani had sparked spontaneous protests, but those peaceful protesters were mercilessly fired upon, blinded and critically injured. The right to self-determination that had been promised them through a series of Security Council resolutions had still not been realised, but time had weakened neither their resolve nor their aspirations. The people of Indian-occupied Kashmir should be allowed to hold a free and fair plebiscite to enable them to decide their future. No amount of verbiage could obfuscate that reality.

Pakistan Second Right of Reply (in all available languages)

India Second Right of Reply (in all available languages)

The representative of Pakistan said that the Minister from India had used a litany of falsehoods and a travesty of the facts in her remarks.  The Government of Pakistan rejected all the baseless allegations in her statement that were intended to deflect global attention from the actions of Indian forces in killing, blinding or injuring innocent Kashmiri women and children.  Demanding a full United Nations investigation into human rights violations in Kashmir, he said the Organization should be allowed unfettered access to the state – which never was and never could be part of India – for that purpose.  Kashmir’s struggle for the right to self-determination was legitimate and it had a right to moral and political support from the international community, he said, adding that India had long been a sponsor and practitioner of State terrorism against all its neighbours, including Pakistan.  It had also armed and supported individuals listed under United Nations sanctions.

The representative of India said that her counterpart from Pakistan had made fanciful and misleading statements, but no attempt to answer questions posed by the international community.  She asked how that country could allow terrorist havens to continue flourishing, and whether its representative could confirm that her country did not use terrorist proxies as a matter of State policy.  A State built upon atrocities against its own people could not talk about human rights, she emphasized.  India rejected such sermons, and asked whether Pakistan could deny that its armed forces had committed genocide in 1971 or that it had repeatedly used artillery against its own people.  It appeared that Pakistan’s representative had not heard the Indian Minister earlier, when she had said that Jammu and Kashmir was an integral part of India and always would be.

Pakistan Third Right of Reply (in all available languages)

India Third Right of Reply (in all available languages)

The representative of Pakistan said his Government rejected all claims and fabrications in India’s remarks.  Regardless of how many times a lie was repeated, it could not become truth, he emphasized.  Kashmir remained a disputed territory and any claims against it were contrary to the principles of international law.  India’s attempts to decimate Kashmir’s population and its sabotage activities were well-documented facts.

The representative of India said his country would remain silent, adding that the Pakistan’s deception, deceit and denial were only to be expected.