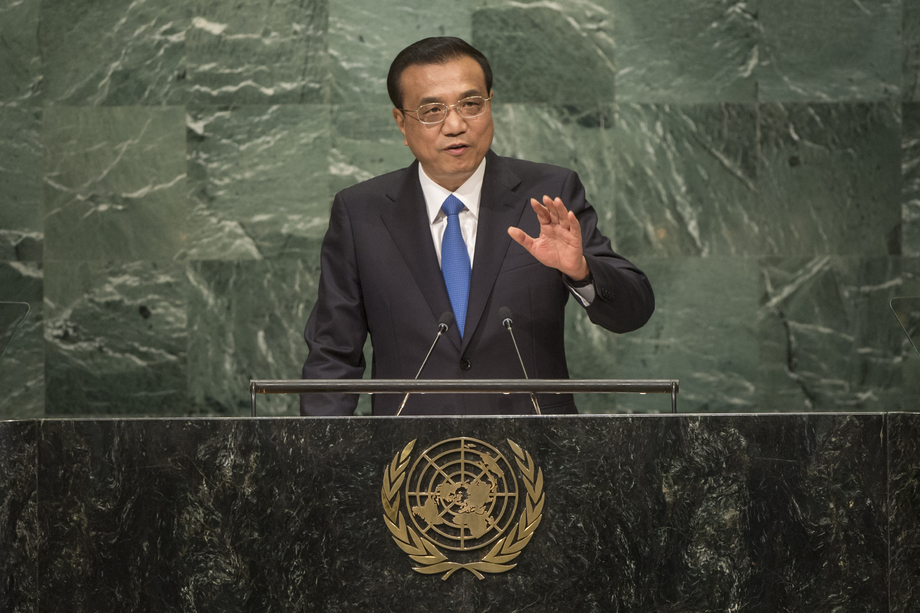 LI KEQIANG, Premier of the State Council of China, noted that China had been among the first countries to submit to the United Nations its national plan for implementation of the 2030 Agenda.  Sustainable development was at the heart of issues ranging from poverty to the current refugee situation.  However, development would not be sustainable if it was imbalanced; if it widened the gap between the global North and South; if driven by high consumption and pollution; or if economic and social progress were not well coordinated.  Rather, it must be inclusive and interconnected.  To be sure, world economic recovery was lukewarm and momentum for sustainable development was weak, with recurrence of major diseases and natural disasters.  “Difficult moments called for stronger confidence,” he said, urging the international community to see itself in a shared future of interconnected interests and to make efforts to tackle global challenges.

Urging that the United Nations Charter be upheld, he called for States to support the Organization’s lead role in global affairs, support reformed global governance mechanisms that reflect the changed international landscape, and take part in a global partnership that featured dialogue over confrontation.  Elucidating on several matters, he also said the international community should urge parties in Syria to end the fighting.  In addition, he advocated denuclearizing the Korean Peninsula and seeking solutions to maintain the non-proliferation regime.  While economic globalization, including trade and investment, had been a driving force for growth, it had also taken a toll on certain industries and required measures to address such problems while keeping the bigger picture in mind.  Globalization was in line with interests of all countries.  He cautioned against protectionism and voiced support for the open trade regime of the World Trade Organization (WTO), among other things.  Redoubled efforts to support Africa and the least developed countries were needed.  Developed countries should make good on their official development assistance (ODA) pledges, while developing countries must pursue self-development and find paths suited to their national conditions.

On his country’s economic growth, he said it had registered 6.7 per cent in the first half of the year, with 9.5 million jobs created in the first eight months.  A developing country, with a long way to go before achieving modernization, China would promote development through deepening reforms and opening its doors to the outside world, as closed door policies had only led to stagnation.  China would also pursue cooperation with all countries on the basis of the five principles of peaceful co-existence.  Maritime territorial disputes should be resolved through compromise and negotiation.  His Government, as well, would provide $300 million in humanitarian assistance to relevant countries and international organizations.  With 1.3 billion people, “we need to run our own affairs well”, he said “and take our international responsibilities”.  China would boost cooperation with other developing countries, and increase its assistance to others as its economy grew.  It would also increase its annual contributions to United Nations agencies by $100 million over its 2015 level by 2020.

The representative of China, speaking in exercise of the right of reply and in response to the Philippines, said his country had already made statements on its position on the Arbitral Tribunal findings.  Its awards were null and void and had no binding force.  Territorial sovereignty and maritime rights in the South China Sea should not be affected by those awards, and China would never accept any claim or action based on them.  It would continue to abide by international law as enshrined in the Charter including with respect to State sovereignty and the peaceful settlement of disputes.

In response, the representative of the Philippines said its position had been exhaustively discussed at the 12 July arbitration.  Both his country and China were State parties to the United Nations Convention on the Law of the Sea and thus the awards should be final and complied with by all parties.  His country had allowed China to move forward on dispute resolution and preliminary talks were ongoing.  The award of the Arbitral Tribunal should be a starting point.  The award was now a significant part of jurisprudence, and could not be ignored in terms of the maritime entitlements of both countries together with their respective rights and obligations.  The Tribunal did have jurisdiction over the dispute.  In October 2015, it had found that its jurisdiction applied to China even if that country chose not to participate in proceedings.  On 12 July, it had rendered an award on the merits.  Some of its points included finding that China’s claims to historic maritime rights ran contrary to the Convention and exceeded geographic limits.  Under the convention ruling, none of the islands could sustain human habitation and accordingly should have no economic zone or continental shelf; they were all rocks.  The Tribunal had also found that China’s artificial island building had caused devastating and long-lasting damage on the marine environment and that it had not cooperated with other States bordering the South China Sea.

The representative of China said unilateral arbitration was aimed not at resolving the dispute or maintaining peace and stability, but at denying Chinese territorial sovereignty and maritime rights.  The Tribunal’s conduct contravened the practice of international arbitration.  Currently, thanks to China and Association of Southeast Asian Nations (ASEAN) countries, the situation in the South China Sea was progressing in a positive direction.