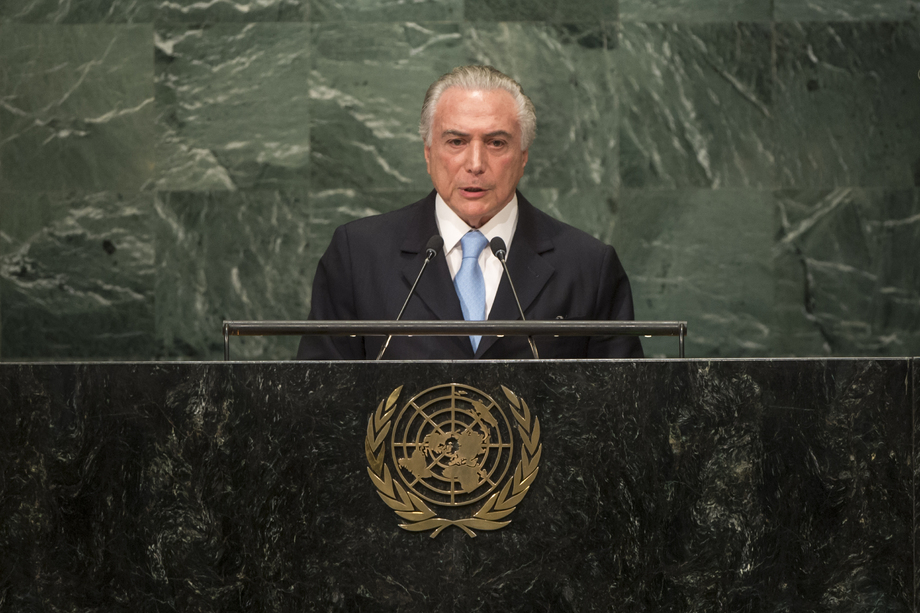 MICHEL TEMER, President of Brazil, said political near-paralysis had led to prolonged and unresolved wars, and that the system’s inability to react to conflicts had exacerbated the cycle of destruction.  That had reintroduced xenophobia and extreme forms nationalism across continents, which, in turn, had spilled over into the economic realm, with greater displays of protectionism.  To counter the resulting instability, the international community must unite through diplomacy, he emphasized.  Several events throughout the past year had displayed the power of diplomacy.  They included the resolution of the Iranian nuclear issue; the peace accord between the Government of Colombia and the Revolutionary Armed Forces of Colombia (FARC); the re-establishment of relations between Cuba and the United States; and the twenty-fifth anniversary of the Brazilian-Argentine Agency for Accounting and Control of Nuclear Materials.

While those who initiated conflicts and violence had reinvented themselves, multilateral institutions were yet to transform, he said, noting that Brazil had called reform of the Security Council.  Reinventing multilateral institutions would help the international community more effectively combat global challenges, including trafficking in drugs and weapons, countering organized crime networks, and pushing nuclear-disarmament programmes forward.  In the Middle East, reaching a political solution to the war and suffering in Syria was paramount, he stressed, calling on parties to respect the agreements endorsed by the Security Council and to ensure humanitarian access to the civilian population.  Regarding Israel and Palestine, Brazil continued to support a two-State solution, he said.

Underlining the importance of the 2030 Agenda for Sustainable Development, he underscored:  “We live on the same planet, there is no plan B.”  Greater collaboration and solidarity were needed to push the sustainable development agenda forward, but regrettably, that endeavour was hindered by rising protectionism, which placed a barrier to development, especially in the agricultural sector.  “Development is more than just an objective; it is an imperative,” he emphasized.

Domestically, Brazil had experienced a complex journey, with the impeachment of its former President and its political system undergoing a cleansing process, he said.  “The will of individuals does not prevail over the strength of institutions,” he said, adding that the ahead for his country was to resume economic growth and revive the job market in order to bring millions of lost jobs back to Brazilian workers.

Also in exercise of the right of reply, the representative of Brazil referred to the statements by the representative of Cuba.  He noted that different cultures and political systems coexisted successfully in the region, and called on States to respect cultural and political diversity for fruitful cooperation and harmonious coexistence at the regional and international levels..

The representative of Brazil, in response to the statement by Venezuela, reiterated what his country’s President had said earlier in the week, that in the Latin American region, Governments of different political colours coexisted; that was natural and to be welcomed.  But it was also essential to have mutual respect, and recognize that all were capable of the same basic goals of human rights, social progress, security and freedom.