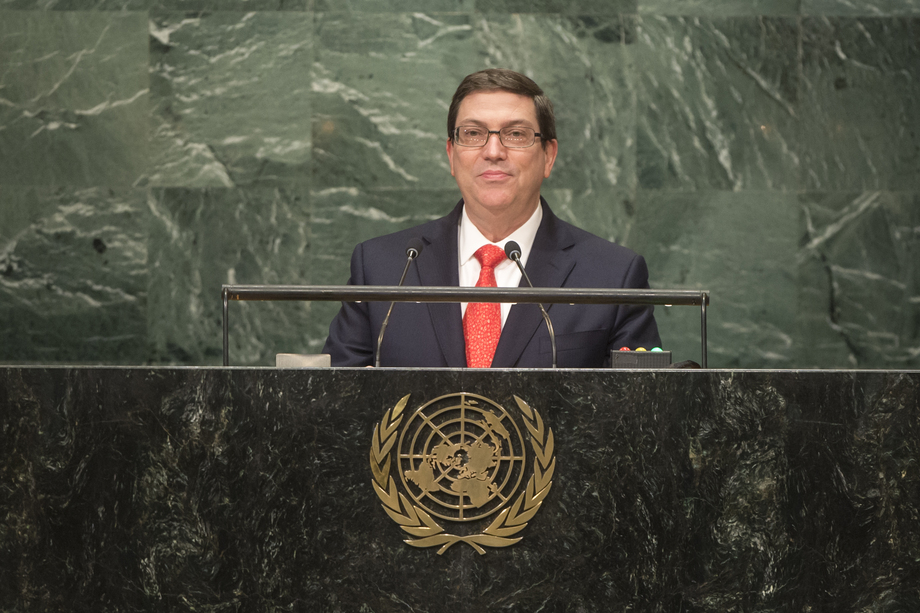 BRUNO RODRÍGUEZ PARRILLA, Minister for Foreign Affairs of Cuba, underscored the gap between the world’s rich and poor.  Weapon stockpiles and $1.7 trillion in annual military spending gave lie to claims that resources for eradicating poverty and underdevelopment were lacking.  A new international financial architecture was needed.  Waves of Europe-bound refugees — driven by underdevelopment as well as NATO interventions — demonstrated the unsustainability of the current international order.  He expressed solidarity with small island developing States which had been most affected by climate change, adding that capitalism would never be historically or environmentally sustainable.

There needed to be a culture of peace and justice as the basis of a new international order, he said.  Observance of the Charter and international law — infringed repeatedly by NATO — was indispensable.  The United Nations must be defended from unilateralism and become more democratic.  Security Council reform should not be put off, while the role of the Assembly should be strengthened.  Finding a just and lasting solution to the Middle East conflict was imperative.  He was confident that Syrians could settle their differences on their own, once foreign intervention aimed at promoting regime change had ceased.  As the victim of State terrorism, Cuba condemned all forms and manifestations of terrorism.

He welcomed the peace agreement in Colombia, adding that Cuba would continue to support Venezuela against imperialist and oligarchic interference.  Cuba condemned the parliamentary and judicial coup d’état in Brazil, and Puerto Rico deserved to be free and independent after more than a century of colonial domination.  More than a year after re-establishing diplomatic relations, Cuba and the United States had achieved progress in their bilateral relations.  However, the blockade was still in force, dealing hardship to Cubans and hindering its relations with other countries.  Given that situation, Cuba would again present the Assembly with a draft resolution entitled “necessity of ending the economic, commercial and financial embargo imposed by the United States of America against Cuba”.