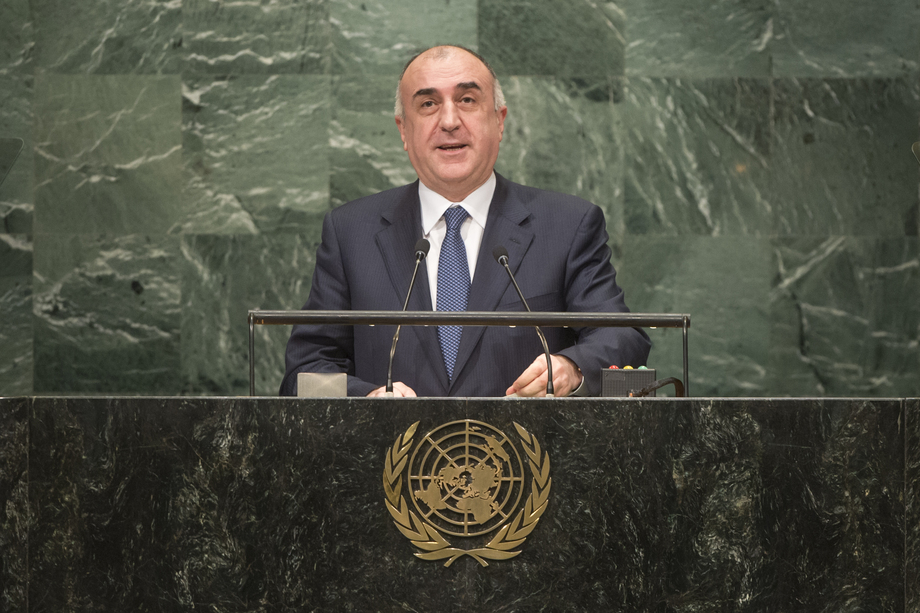 ELMAR MAMMADYAROV, Minister for Foreign Affairs of Azerbaijan, said his country had adapted its national development strategy to take into account the Sustainable Development Goals.  Despite the global economic crisis and sharp fall in oil prices, its economy had grown, enabling it to actively support international development, he said, noting his country’s membership in the Economic and Social Council.  However, there could be no sustainable development without peace, he said, noting that since the last general debate, there had been no substantive progress in settling the Armenia-Azerbaijan conflict.  Armenia still occupied Azerbaijani territory, including Nagorno-Karabakh and seven adjacent districts, in flagrant violation of international law and Security Council resolutions.

Armenia’s policies and practices in the occupied territories of Azerbaijan undermined prospects for a political settlement and threatened regional peace and stability, he said.  It was refusing to withdraw its troops and it was preventing hundreds of thousands of forcibly displaced Azerbaijanis from returning to their homes.  This month, it began intensive military activity in the occupied Aghdam district.  Azerbaijan expected Armenia to halt is military build-up and to engage in negotiations in good faith in order to find a long-overdue political solution.  The conflict could only be resolved on the basis of the sovereignty and territorial integrity of Azerbaijan within its internationally recognized borders.

Speaking in exercise of the right of reply, The representative of Armenia responded to the statement by Azerbaijan, saying that Nagorno-Karabakh was never part of Azerbaijan and had been transferred by a Bolshevik decision. After the dissolution of the Soviet Union, it was independent. It had never been and never would be part of Azerbaijan. The sooner it stopped killing civilians, the sooner the issue would be resolved. The war it had unleashed on those people was lost a long time ago. The barbarism committed in the process had included intentional and indiscriminate targeting of women, children and the elderly, which was incompatible with the norms of the civilized world. It could not be tolerated for the President of a country to encourage those who had committed such barbaric acts, and the glorification of persons directly involved in atrocities constituted as crimes against humanity and war crimes.

The representative of Azerbaijan, responding, said he wanted to counter the baseless allegations of his Armenian counterpart. Armenia was occupying almost one-fifth of Azerbaijan’s territory and it had carried out large-scale ethnic cleansing. With the use of force, Armenia had flagrantly violated the Charter of the United Nations as well as basic human rights, international law and international humanitarian law. Armenia had sought to consolidate the status quo and mislead the international community, he said, adding that Azerbaijan stood for an effective ceasefire, which Armenia had violated.

The representative of Armenia said nothing was established until it was proven.  He added that if any nation had the right to self-determination, it was the Armenians in Nagorno-Karabakh.

The representative of Azerbaijan said negotiations had been based on the principles of the Helsinki Final Act.  Regarding respect for the territorial integrity of States, he said he wondered how the Armenian side viewed its obligations under international law.