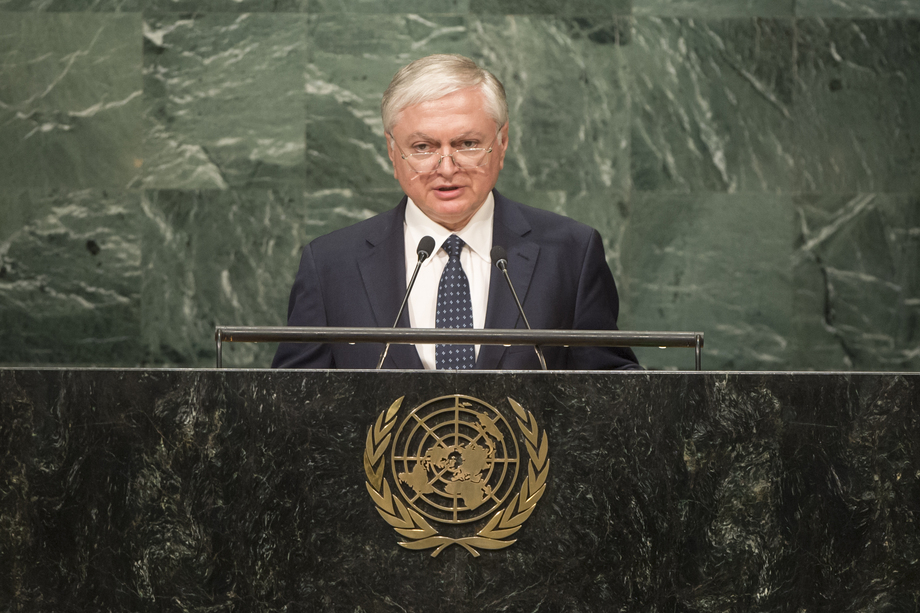 EDWARD NALBANDIAN, Minister for Foreign Affairs of Armenia, condemned the crimes of Da’esh and other terrorist groups, while expressing concern about the devastating impact of the war in Syria.  Pointing out that many of those displaced from Syria were Armenian-Syrians who had found refuge there 100 years ago, he said that his country had provided refuge to more than 20,000 refugees from Syria.  Calling for wider international cooperation to address the challenges posed by mass displacement, he emphasized the importance of addressing the root causes of large movements of people by preventing crimes against humanity, settling disputes in a peaceful manner and seeking lasting political solutions.  Armenia had contributed to such efforts by having initiated resolutions on the prevention of genocide in the Human Rights Council, he said.

Condemning Azerbaijan’s policies of ethnic cleansing and aggression against the Armenian community of Nagorno-Karabakh, he said those policies stood in violation of the Armenian right to self-determination.  Earlier this year, Azerbaijan had indiscriminately targeted civilians and civilian infrastructure in the region, he recalled, noting that there was evidence of torture — a gross violation of international law.  He called for full adherence to the 1994-1995 trilateral ceasefire agreements, the creation of a mechanism for investigating ceasefire violations, and expanded capacity for the office of the Personal Representative of the Organization for Security and Co-operation in Europe (OSCE) Chairperson-in-Office.   Finally, he condemned Turkey’s land blockade of Armenia as a gross violation of international law, which hampered the economic cooperation and integration promoted under the 2030 Agenda.

Speaking in exercise of the right of reply, The representative of Armenia responded to the statement by Azerbaijan, saying that Nagorno-Karabakh was never part of Azerbaijan and had been transferred by a Bolshevik decision. After the dissolution of the Soviet Union, it was independent. It had never been and never would be part of Azerbaijan. The sooner it stopped killing civilians, the sooner the issue would be resolved. The war it had unleashed on those people was lost a long time ago. The barbarism committed in the process had included intentional and indiscriminate targeting of women, children and the elderly, which was incompatible with the norms of the civilized world. It could not be tolerated for the President of a country to encourage those who had committed such barbaric acts, and the glorification of persons directly involved in atrocities constituted as crimes against humanity and war crimes.

The representative of Azerbaijan, responding, said he wanted to counter the baseless allegations of his Armenian counterpart. Armenia was occupying almost one-fifth of Azerbaijan’s territory and it had carried out large-scale ethnic cleansing. With the use of force, Armenia had flagrantly violated the Charter of the United Nations as well as basic human rights, international law and international humanitarian law. Armenia had sought to consolidate the status quo and mislead the international community, he said, adding that Azerbaijan stood for an effective ceasefire, which Armenia had violated.

The representative of Armenia said nothing was established until it was proven.  He added that if any nation had the right to self-determination, it was the Armenians in Nagorno-Karabakh.

The representative of Azerbaijan said negotiations had been based on the principles of the Helsinki Final Act.  Regarding respect for the territorial integrity of States, he said he wondered how the Armenian side viewed its obligations under international law.