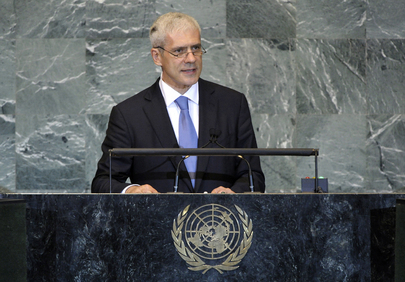 BORIS TADIĆ, President of Serbia, emphasizing that unilateral action in problematic circumstances simply created crises without good reason, noted that, in its attempt to join the European Union and attain other objectives, regional cooperation had been the cornerstone of Serbia’s diplomacy. The new level of confidence in relations with Croatia — valuable in terms of securing stability in Bosnia and Herzegovina — was another instance of the cooperation that had set the stage for Serbia to seek the Chairmanship-in-Office of OSCE for 2014, the centenary of the start of the First World War, and would help “close the book” on instability in Europe.

He said his country wished to fulfil all its obligations and to promote reconciliation and healing after the tragedies of the 1990s, and had devoted enormous resources to the capture of war criminals. Others must do their part, as well, he added, stressing that the Security Council’s mandate to investigate serious crimes must be applied in uncovering the “full truth” about illicit organ trafficking in Kosovo, as alleged in a report by the Council of Europe. He also underlined the importance of negotiated settlements as a basic international principle recently reinforced by the successful birth of South Sudan. However, that principle was not applied in the case of the Serbian province of Kosovo and Metohija, where the ethnic Albanian authorities had attempted secession.

Thanking those countries that had refrained from recognizing Kosovo’s unilateral declaration of independence, he said appeals to the contrary, as heard in the Assembly, only reduced the chances of finding a solution acceptable to all, while creating a deeply disturbing precedent. Similarly, the attempt to impose customs officers on the boundary between Serbia proper and northern Kosovo only served to evoke a threatening climate, which was counter-productive to the trust required to advance the important dialogue facilitated by the European Union. However, Serbia would remain an active party, he pledged.

He said his country had always sought tangible assurances that ethnic Serb communities in Kosovo, as well as Serbian interests and cultural heritage, would be protected and allowed to flourish. Any understanding on Kosovo must include guarantees on the status of the ethnic Serb population, the proper implementation of decentralization, protection of the status of the Serbian Orthodox Church and its holy sites, and resolution of pending property claims. As for the United Nations Interim Administration Mission in Kosovo (UNMIK) established by resolution 1244 (1999), he said there must be a limit to his country’s responsibility for developments over which it lacked the necessary authority.

“I look forward to the day when I can stand at this podium and report that we have resolved this issue, that we have found a mutually-acceptable compromise, not an imposed outcome where one side gets everything,” he said. Serbia’s other immediate and parallel objective was accelerated progress in gaining membership of the European Union. Serbia had set a regional example in matters of reconciliation, the rule of law, and the fight against organized crime, he said, emphasizing that the country’s presence as a candidate for membership, actively negotiating accession, was an asset to both the European Union and the United Nations.

Taking the floor a second time, Serbia’s representative said that he had stated all he deemed to be necessary and it was now up to the Assembly to draw its own conclusions.

Speaking in exercise of his right of reply, the representative of Serbia said that today’s speech by the Prime Minister of Albania had contained “misrepresentations and falsehoods”. Kosovo had taken unilateral actions of a “coercive nature” in the negotiation process in Brussels, attempting to create a fait accompli on issues that were still pending. The Prime Minister had also misrepresented the advisory opinion of the International Court of Justice from July 2010, he added, noting that the Court had never decided that the declaration of independence of Kosovo was in full compliance with international law. In fact, it had only found that Kosovo did not violate international law because the law contained no applicable prohibitions on declarations of independence.

Neither Serbia nor the Security Council had ever accepted “Ahtisaari’s package”, which the Prime Minister had mentioned today. Further, it was not true that Serbian cultural heritage was more secure in Kosovo today than ever. One only needed to recall the 2004 Albanian pogrom of Serbs to see that. Nor were inter-ethnic relations where Albanians and Serbs lived together “very good”, as the Prime Minister had said. Criminal groups mentioned by the Prime Minister were better characterized as Albanian groups that had a long tradition of devastating the rule of law in Kosovo. Finally, on the issue of the return of the remains for victims of the conflict in Kosovo, Serbia had shown its full readiness to complete that task, he said.

Taking the floor a second time, Serbia’s representative said that he had stated all he deemed to be necessary and it was now up to the Assembly to draw its own conclusions.