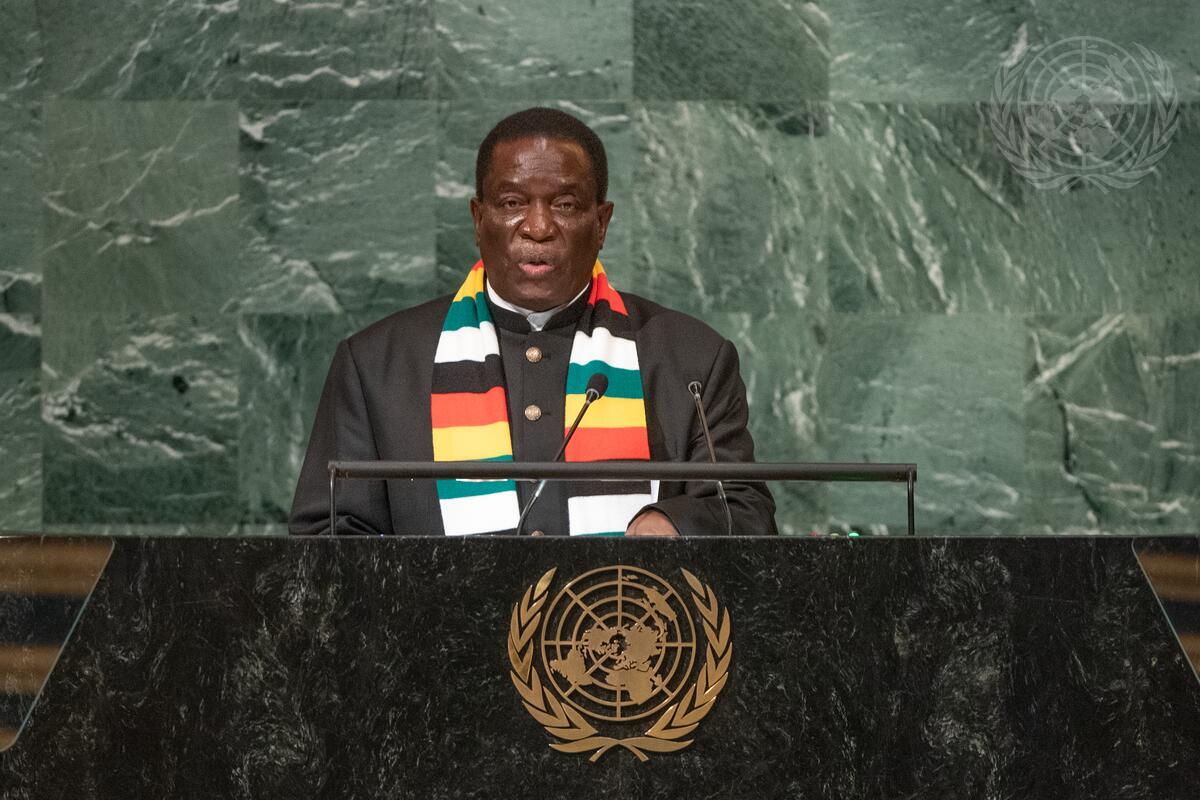 EMMERSON DAMBUDZO MNANGAGWA, President of Zimbabwe, said that, despite all the illegal economic sanctions against his country, it has successfully implemented a COVID‑19 national response strategy.  Furthermore, it has made significant strides towards ending poverty and hunger, implementing various policies and programmes to support and empower communal and small-scale farmers, which contributed to household and national food and nutrition security.  Noting that the United Nations Framework Convention on Climate Change and the Paris Agreement “should remain the primary platforms for negotiating collective global response to climate change”, he expressed concern about inadequate financing for those initiatives, which leaves the scope for effective and just transition to renewable energy among developing countries under serious threat.  He hoped that the upcoming 2022 United Nations Climate Change Conference would deliver more concrete action on adaptation, loss and damage, climate specific finance, technology transfer and capacity-building.  “Zimbabwe is making concerted and deliberate efforts to integrate climate action into national policies,” he said.

Zimbabwe is implementing an ambitious programme to increase its number of dams for irrigation, designed to create greenbelts across the country to reduce dependence on rain-fed agricultural activities and increase its export-led production and productivity, he continued.  In addition, the country’s comprehensive Agriculture Transformation Strategy has increased production and productivity across its agriculture sector.  That has resulted in his country being self-sufficient in its wheat production as well as allowing it to export its horticulture.  The “Zimbabwe is open for business mantra”, he said, “has fostered strong partnership between the Government and the private sector for inclusive and sustainable development”.  Massive infrastructure development projects, such as dams, energy plants and roads, have broadened its national economic asset base and enhanced regional connectivity and integration.

An increasingly unsustainable debt burden, the prohibitive cost of borrowing, illicit financial flows, and the exploitation of natural resources from developing States “have all combined to relegate developing countries to the periphery of the global financial system”, he said.  Accordingly, he called for a just and more inclusive global financial system responsive to those challenges.  Underscoring that the international trade architecture under the World Trade Organization (WTO) remained indifferent to the needs of developing countries, he highlighted the role the African Continental Free Trade Area played in stimulating the continent’s economic growth and development.  He further on called for the liberalization of services and strengthening of competition policies and intellectual property rights, along with the adoption of digital trade.

“More work needs to be done globally to close the gender gap,” he said, underscoring that proportional representation for women in Parliament is enshrined in Zimbabwe’s Constitution.  To further strengthen participatory democracy and good governance, the Government introduced a 30 per cent quota for women in local authorities.  Zimbabwe is modernizing, industrializing based on local resources and its human capital base, as it also continues to entrench democracy, good governance and the rule of law.  Despite this success, the ongoing effects of illegal sanctions continue to hamper the country’s progress, including being able to realize sustainable and inclusive development.  Zimbabwe’s engagement and re-engagement policy underpins the principles of mutual understanding and respect, he said, noting his country’s desire to be “a friend to all and an enemy to none”.