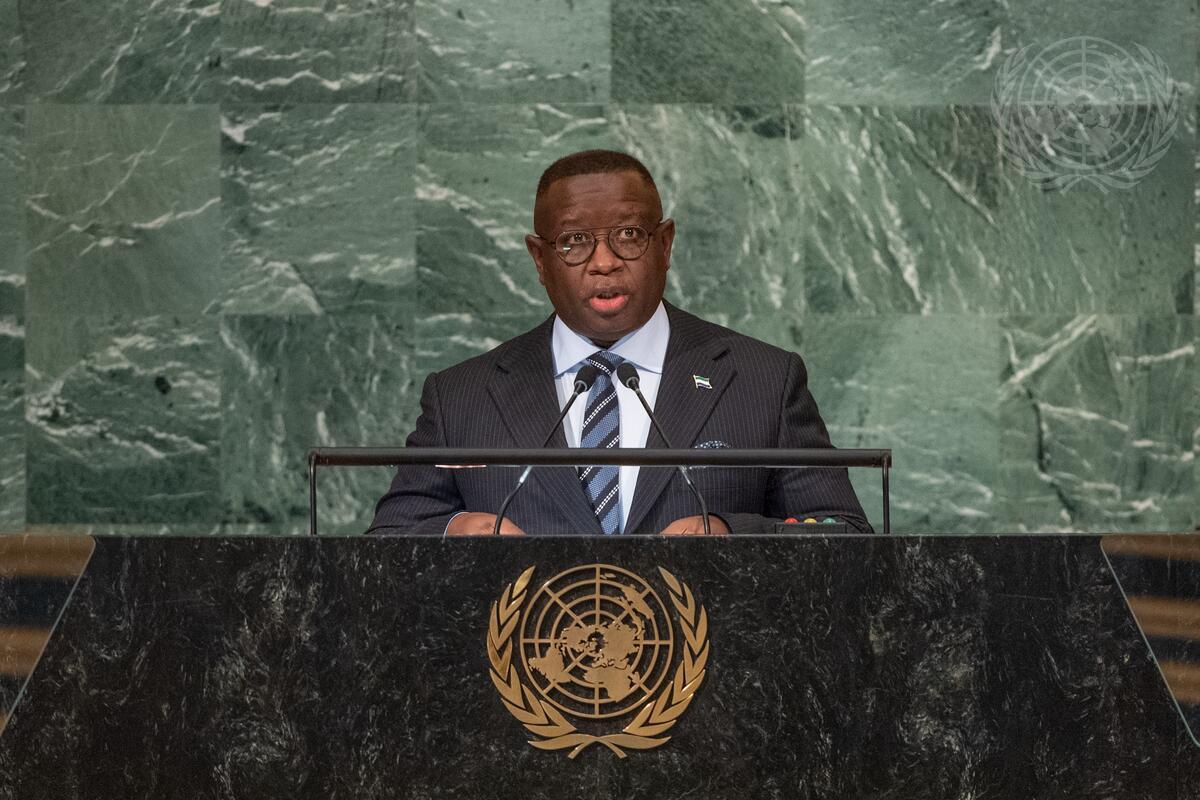 JULIUS MAADA BIO, President of Sierra Leone, in noting the effects of repurposed global development and international finance, disrupted production and supply chains, increased food and energy insecurity and slowed economies and adverse climate change impacts on the 2030 Agenda for Sustainable Development called for fair innovation in development financing which is free of stringent restrictions and high transaction costs.  As aid must align with domestic development priorities, multilateral financial institutions can de-risk the investments that are critical for sustainable economic development.

Turning to the impact of climate change, he urged consistency on meeting international commitments to address the phenomenon.  “Beyond the usual declaratives, we must collaborate on and coordinate mitigation efforts, improve infrastructure for early warning systems, invest more in improving the management of water resources, promote disaster risk management, and enhance the conservation and protection of natural habitat,” he said.  Fair and accessible multilateral climate financing should catalyse global and country-specific measures and innovation and must also include the roles and interests of women and young people.  In reaffirming his country’s full commitment to the Treaty on the Conservation and Sustainable Use of Marine Biodiversity of Areas Beyond National Jurisdiction, he stressed that the Treaty must prioritize conservation measures, fair and equitable benefits sharing, meaningful capacity development and marine technology transfer.

Speaking as co-Chair of the High-Level Steering Committee on Sustainable Development Goal 4 and as a champion of the Transforming Education Summit, he urged concerted global action on addressing the learning crisis by, among other things, mobilizing innovative financing models, underwriting universal access to education, especially for girls and learners with disabilities, addressing infrastructure deficits, supporting school feeding programmes, and funding technical and vocational training as well as other education needs.  He echoed the urgent call to scale up financing to support agriculture and irrigation, enhance food systems and nutrition for vulnerable populations and social protection for at-risk populations — all vital to addressing the global food crisis that is disproportionately affecting least developed countries.  He also joined the call to address global supply constraints for fertilizers, rice and other agricultural commodities while noting that the establishment of agricultural development banks can promote self-sufficiency and greater resilience.

Expressing Sierra Leone’s commitment to putting women and girls at the centre of development, he stressed:  “We cannot deliver on the 2030 Agenda on sustainable development without the achievement of gender equality and women’s empowerment.”  His Government has taken extensive legislative and administrative actions to address sexual and gender-based violence since declaring rape as a national emergency in 2019.  Recalling that Sierra Leone sponsored the General Assembly resolution adopted on 2 September 2022 entitled “International Cooperation for Access to Justice, Remedies and Assistance for Survivors of Sexual Violence”, he called on all to implement access to justice and other remedies and to ensure dignity for all survivors.

Recognizing the diligent contributions of small States as the strongest advocates for the rules-based international system, he announced Sierra Leone’s candidacy for a non-permanent Security Council seat for 2024-2025.  In reaffirming the United Nations Charter and the Declaration on the Granting of Independence to Colonial Countries and Peoples, he called on all parties to continue their “good faith and firm commitment to a conclusive and durable resolution of all sovereignty disputes”.  Speaking in his capacity at the Coordinator of the African Union Committee of Ten (C-10) on Security Council reform, he commended progress in intergovernmental negotiations and attributed them to the Assembly’s acknowledgement of the “wider recognition of and broader support by Member States for the legitimate aspiration of African countries to play their rightful role on the global stage.”  He urged Member States to demonstrate renewed commitment and political will towards correcting the historical injustice done to Africa by making the Council more inclusive.