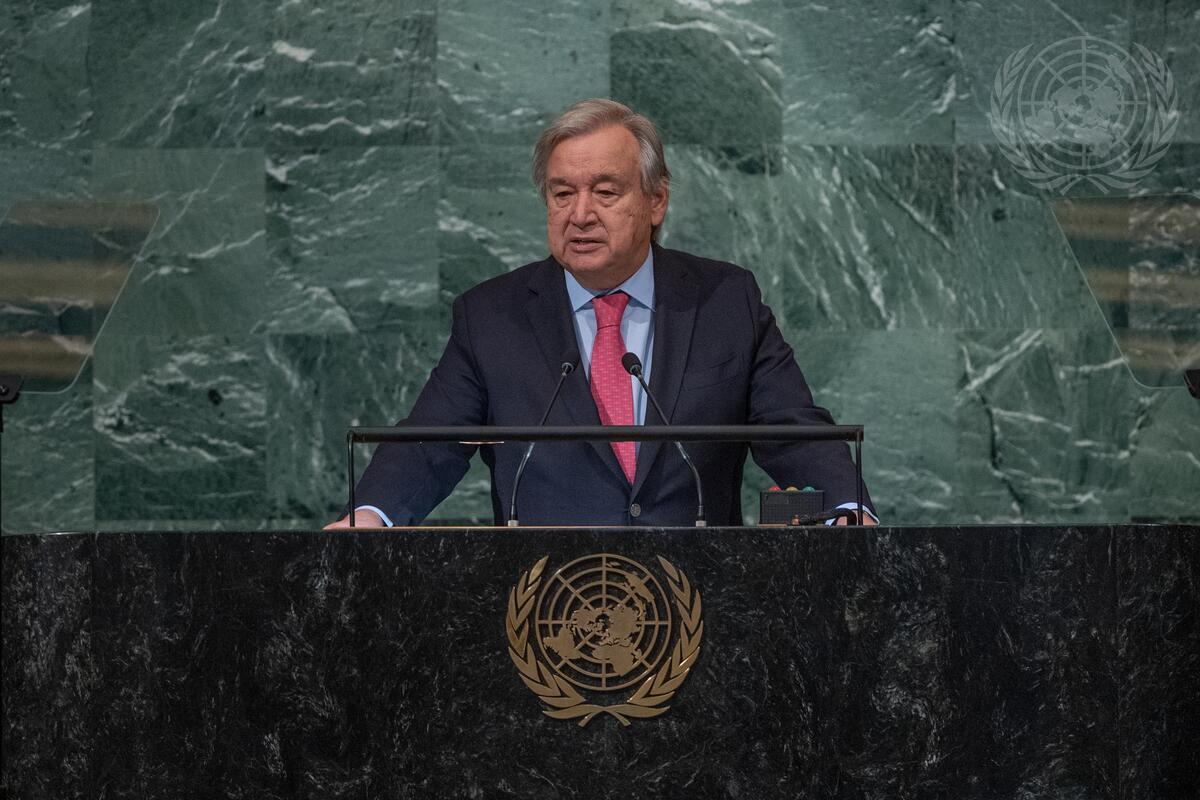 ANTÓNIO GUTERRES, Secretary-General of the United Nations, said that despite growing divides and inequalities, the Brave Commander, which sailed the Black Sea with the United Nations flag flying high, signals promise and hope for a world “in big trouble”.  The ship, loaded with Ukrainian grain destined for the people of the Horn of Africa, where millions are on the edge of famine, navigated through a war zone, guided by the very parties to the conflict.  “Ukraine and the Russian Federation, with the support of Türkiye, came together to make it happen, despite the enormous complexities…  Some might call it a miracle on the sea.  In truth, it is multilateral diplomacy in action,” he underscored.  In 2022, the world has enough food, the problem is distribution, he pointed out, stressing the need to continue removing all remaining obstacles to the export of Russian fertilizers and their ingredients, including ammonia.  The impact of high gas prices on the production of nitrogen fertilizers must also be addressed seriously, he said, warning that without action now, the global fertilizer shortage could quickly morph into a global food shortage.

“A cost-of-living crisis is raging.  Trust is crumbling.  Inequalities are exploding.  Our planet is burning.  People are hurting…  We have a duty to act.  And yet we are gridlocked in colossal global dysfunction,” he stressed.  Citing the war in Ukraine, the multiplication of conflicts around the globe, the climate emergency and biodiversity loss, and developing countries’ dire financial situation, he warned that despite new technologies there is a forest of red flags.  Social media platforms based on a business model that monetizes outrage, anger and negativity are causing untold damage to communities and societies.  Hate speech, misinformation and abuse — targeted especially at women and vulnerable groups — are proliferating.  Noting other threats to the integrity of information systems, the media, and democracy itself, he said progress on those, and other issues, is being held hostage to geopolitical tensions.  “Our world is in peril — and paralyzed,” he stressed, noting that geopolitical divides are undermining the work of the Security Council, international law, people’s trust and people’s faith in democratic institutions, and all forms of international cooperation. He called on the “coalition of the world” to urgently overcome divisions and act together.  It starts with achieving and sustaining peace, he said, pointing to the widespread destruction unleashed on Ukraine.

The funding gap of $32 billion for the Global Humanitarian Appeal is at the widest ever, he said, describing the dire situations in Afghanistan, the Democratic Republic of the Congo, Ethiopia, Haiti, the Horn of Africa, Libya, Israel, the State of Palestine, Myanmar, the Sahel and Syria.  Although the Review Conference of the Nuclear Non-Proliferation Treaty failed to reach consensus and a nuclear deal with Iran remains elusive, there are some glimmers of hope.  In Yemen, the nationwide truce is fragile but holding.  In Colombia, the peace process is taking root.  Underscoring the need for concerted action everywhere, he said his report Our Common Agenda outlined elements of a new Agenda for Peace, with women’s leadership and participation at front and centre.  Moreover, prevention and peacebuilding, including expanding the role of regional groups, countering terrorism and recognizing the centrality of human rights, must be prioritized.

Highlighting man’s “suicidal war against nature”, he said climate action must be the first priority of every Government and multilateral organization.  Global greenhouse gas emissions need to be slashed by 45 per cent by 2030 to have any hope of reaching net zero by 2050.  Yet emissions are going up at record levels — on course to a 14 per cent increase this decade.  “We have a rendezvous with climate disaster,” he warned, recalling his recent visit to Pakistan where one third of the country is submerged by a “monsoon on steroids”.  Pointing to Europe’s worst heatwave since the Middle Ages; the megadrought in China, the United States and beyond; and famine stalking the Horn of Africa, he said 1 million species are at risk of extinction and no region is untouched.  “The climate crisis is a case study in moral and economic injustice,” he said, noting that the Group of 20 (G20) emits 80 per cent of all greenhouse gas emissions, but the poorest and most vulnerable are bearing its most brutal impacts.

“The fossil fuel industry is feasting on hundreds of billions of dollars in subsidies and windfall profits while household budgets shrink and our planet burns,” he stressed.  Fossil fuel companies and their enablers, including banks, private equity, asset managers and other financial institutions that continue to invest and underwrite carbon pollution, as well as the massive public relations machine raking in billions to shield the fossil fuel industry from scrutiny, must be held to account.  He called on all developed economies to tax the windfall profits of fossil fuel companies, noting that those funds should be redirected in two ways:  to countries suffering loss and damage caused by the climate crisis and to people struggling with rising food and energy prices.

Looking ahead to the twenty-seventh Conference of Parties to the Framework Convention on Climate Change in Egypt, he called on all leaders to realize the goals of the Paris Agreement.  “Lift your climate ambition.  Listen to your people’s calls for change.  Invest in solutions that lead to sustainable economic growth,” he emphasized.  Developing countries need help to make the shift to renewable energy — the pathway to energy security, stable prices and new industries.  The international community must also help countries adapt to worsening climate shocks.  Turning to the biodiversity crisis, he said the world must agree on a post-2020 global biodiversity framework that sets ambitious targets to halt and reverse biodiversity loss, provides adequate financing and eliminates harmful subsidies that destroy ecosystems.  Efforts must also be intensified to finalize an international legally binding agreement to conserve and sustainably use marine biological diversity.

A once-in-a-generation global cost-of-living crisis is unfolding, turbocharged by the war in Ukraine, he said, adding that some 94 countries, many in Africa, face a perfect storm of economic and social fallout from the pandemic, soaring food and energy prices, crushing debt burdens, spiraling inflation, and a lack of access to finance.  Social unrest is inevitable, with conflict not far behind, he warned, stressing that:  “The Sustainable Development Goals are issuing an SOS.”  More people are poor.  More people are hungry.  More people are being denied health care and education.  Gender equality is going backwards and women’s lives are getting worse, from poverty, to choices around sexual and reproductive health, to their personal security.  He called for the launch of an “SDG [Sustainable Development Goals] Stimulus” led by the G20 to massively boost sustainable development for developing countries, noting that the upcoming Group Summit in Bali is the place to start.

Citing the “SDG Stimulus” components, he said multilateral development banks must increase concessional funding to developing countries linked to investments in the Sustainable Development Goals.  Also, the Debt Service Suspension Initiative should be extended and enhanced.  An effective mechanism of debt relief for developing countries is also needed, he said, urging the International Monetary Fund (IMF) and major central banks to expand their liquidity facilities and currency lines immediately and significantly.  Moreover, a new allocation of special drawing rights must be handled differently based on justice and solidarity with developing countries.  Governments must empower specialized funds like Gavi, the Global Fund and the Green Climate Fund, and “G20 economies” should underwrite an expansion of those funds as additional financing for the Sustainable Development Goals.  Noting that the proposed “SDG Stimulus” is only an interim measure,” he said his report Our Common Agenda proposes a New Global Deal to rebalance power and resources between developed and developing countries.

By acting as one, he said the international community can nurture fragile shoots of hope found in climate and peace activists around the world calling out for change, in young people working every day for a better future, in the women and girls fighting for those still being denied their basic human rights.  The United Nations stands with them all, he affirmed, urging Member States to develop common solutions to common problems grounded in goodwill, trust, and the rights shared by every human being.  “Let’s work as one, as a coalition of the world, as united nations,” he said.