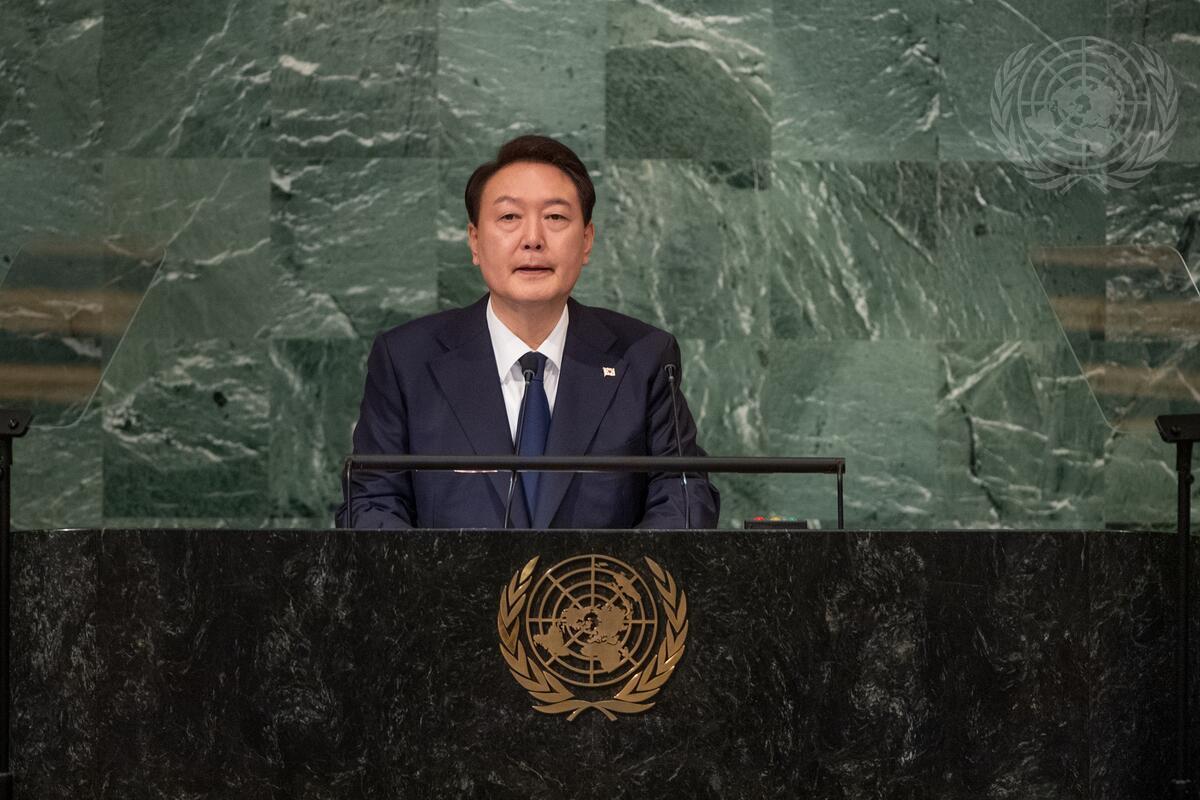 YOON SUK YEOL, President of the Republic of Korea, underscored that, due to attempts to alter the status quo by force and nuclear and other weapons of mass destruction, the global community is once again witnessing its citizens’ freedom and peace being put into jeopardy.  Such threats must be overcome through solidarity and commitment to the framework of universal global norms consolidated over the years within the United Nations system.  Genuine freedom and peace can turn into reality when the world is free from disease and hunger, free from illiteracy and free from want of energy and culture.

Further, the United Nations must play a central role in bringing the community of nations together to decisively step up support to countries with limited fiscal and technical resources, he said.  Countries with leading environmental technologies must work to share new and renewable energy technologies with others.  Describing the task of narrowing the digital divide as one of the urgent tasks for the international community, he emphasized that countries at the forefront of digital innovation must offer broader assistance in digital education, technology transfer and investment.

He then emphasized that his country has scaled up support for those who are in need, including by providing more assistance in his country and increasing the official development assistance (ODA) budget with a vision to achieve a more inclusive development globally.  He outlined his country’s efforts in accelerating research and development for COVID-19 therapeutics and vaccine, pledging $300 million towards the Access to COVID-19 Tools (ACT) Accelerator initiative and $30 million to the Financial Intermediary Fund of the World Bank.

He also said his country was ensuring a more effective response to future infectious disease outbreak by hosting a ministerial meeting of the Global Health Security Agenda in Seoul this November, as well as taking part in negotiations to reach a “pandemic accord” under the World Health Organization.  Turning to the topic of climate change, he said that his country will scale up its “green ODA” to help developing countries transition to a low-carbon future.  His country has transferred and shared its “e-government” digital technology with developing countries and is pushing forward with its plan to transform the Government into a digital platform Government.

“As we seek answers to the global crisis we are faced with, the viability of the UN system and the universal global norms architecture is under test,” he said.  The international community must resolve to stand firmly in solidarity to share the universal value of freedom and work together to uphold and spread freedom.  “Any attempt to turn away from the United Nations system and universal norms will divide the global community into blocs, further compounding the crisis and turmoil,” he said.