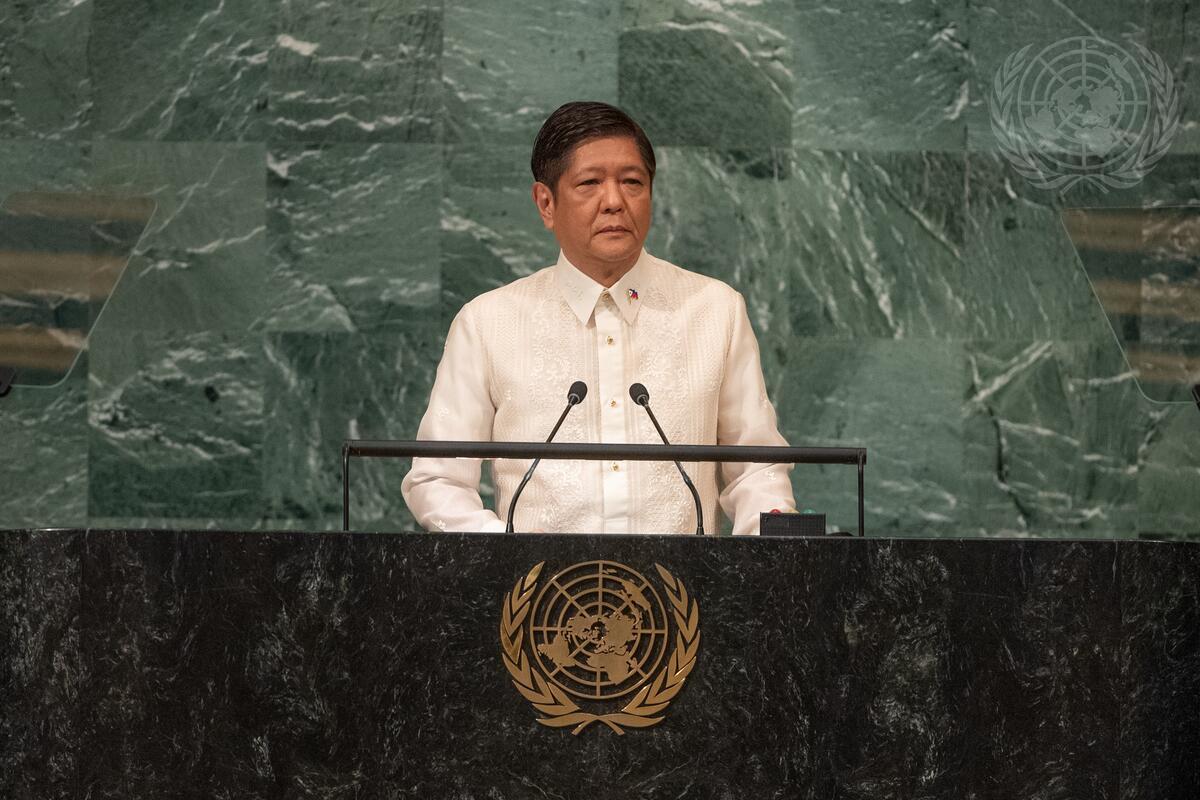 FERDINAND ROMUALDEZ MARCOS, President of Philippines, cited his country’s solid contributions to resolving crises solely through peaceful means, including the Manila Declaration of 1982, and the 1982 United Nations Convention on the Law of the Sea.  Noting the Philippines “will continue to be a friend to all and an enemy of none,” he called for the floor of the General Assembly to be “the last battlefield.”  The world, he stressed, is confronted by a tectonic shift that will determine the ebb and flow of century.

Further, the time for talk about the “if and when” of climate change has long since passed — the greatest global threat, with its effects uneven and reflecting a historical injustice, as those least responsible suffer.  His country is a net carbon sink, absorbing more than it emits — and yet is the fourth most affected by climate change.  He called on industrial countries to cut greenhouse gases, provide climate financing and technology transfer — to lead by example.  When future generations look back, “let them not ask why we did not act to turn the tide.”

With sharpening strategic competitions affecting the world, he noted the Charter of the United Nations is violated worldwide, with hard-won Asian stability threatened.  Inequalities and inequities were evident during the COVID-19 pandemic, when richer States obtained vaccines at the expense of have-nots, and they also lurk in the digital divide and increasing debt burdens.  Calling for public and private resources to expand trade and development, he noted Filipinos have made strides over the past decades towards sustainable development, and the country remains on track to reach upper middle-income status by next year, and become moderately prosperous by 2040.  He further cited its donations to the COVAX Facility, with workers at the frontlines in many countries risking and sacrificing their own lives.

Solidarity with the wisdom of the United Nations founders must be reaffirmed, ending war, respecting human rights, and rejecting the notion of nuclear weapons deterrence, along with eliminating the scourge of all other weapons.  The world has still not seen the end of racism, Asian hate and all prejudice, he noted, while calling for Security Council reform.  He urged the United Nations to also forge ahead with its flagship tradition of global peacekeeping, noting peace in the Philippines had been forged among warring factions and clansmen — demonstrating that unity is possible even in the most trying situations.  It is further crucial to ensure that all nations, especially developing countries, are equipped with tools to navigate uncharted waters of this century.

Sustainability solutions must transcend time and win the future for succeeding generations, he affirmed, including investment in food security — which has been affected by the pandemic and the conflict in Ukraine.  Food is not just a trade commodity but an existential and moral imperative, with water being a finite resource requiring stewardship, along with protecting biodiversity.  On development, he noted that gross domestic product (GDP) is an incomplete measure of national progress.  Science, knowledge and discovery are the keys to unlocking a dynamic future, he said, calling for honing the skills and protecting the intellectual property of youth.  The international community must also define the norms of responsible behaviour in cyberspace and outer space and prevent the weaponization of artificial intelligence.  “Let the challenges of one people be the challenges of all nations,” he said.