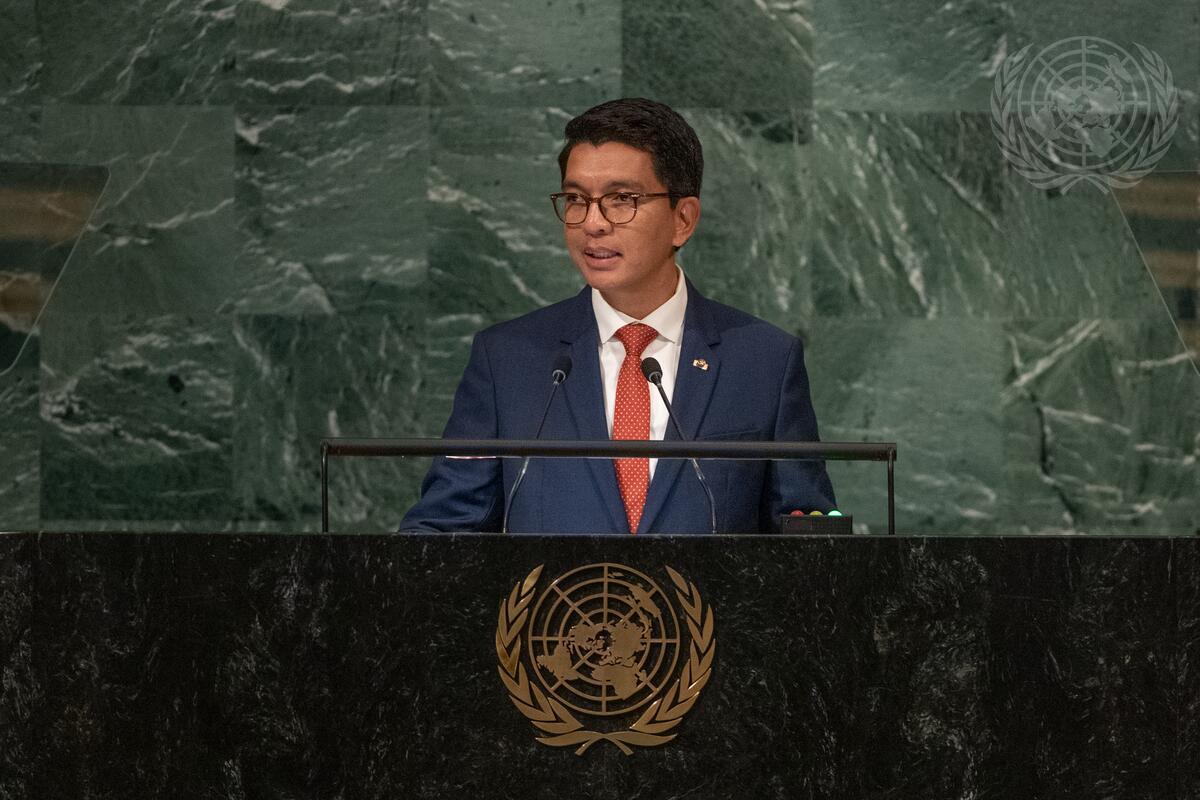 ANDRY NIRINA RAJOELINA, President of Madagascar, said that the General Assembly annually convenes to raise the banner of our aspirations, which should always be universal peace.  Solidarity is more important than ever now that we have entered the third year of the pandemic and are facing its consequences.  In this time, Madagascar placed its trust in science and the natural riches of the lands.  While the apocalypse of Africa was predicted, Madagascar showed that difficulties can be transformed into opportunities, and what it has accomplished has flown in the face of all statistics.

However, before the world fully re-emerged, the conflict in Ukraine sowed further instability, heightened inequality and caused soaring inflation, he said.  “Dialogue is the only way to bring about peace,” he said.  Calling for international solidarity and highlighting the crucial role of the United Nations in promoting multilateralism and finding equitable solutions, he pointed out that conflicts ultimately end with developing countries paying the highest price both in economic and social terms.

In the face of these challenges, countries must review their development strategies.  “There are more powerful weapons than bombs, tanks and missiles.  They are our lands, our raw materials, our natural resources and our people,” he explained.  Industrialization, innovation, inclusive and sustainable economic growth, political vision and political will all strengthen and protect people.  Elevating Madagascar to the level of newly emerging country is the goal — and the plans to double or even triple the production capacity of renewable energy from water, the sun and wind will help achieve that as well as self-sufficiency.  For example, while in 2022 more than 600 million Africans still live in houses only lit by candles and kerosine, the Government of Madagascar will subsidize solar kits to its people.  Then, it will become among the first on the continent to have brought light to all its people, he said.

Equally alarming and dangerous to world peace, security and future generations is climate change.  While stressing the unfairness that the least polluting countries are paying the highest price, he stated that access to the annually committed $100 billion of the Green Climate Fund has been “painfully slow”.  Urging Member States to turn words into actions, he said:  “Today, I carry the cries and the voice of the African continent in general and of Madagascar in particular.”  At this moment, infrastructure projects, including roads, schools, health-care centres, hospitals, dams, courts prisons, and sport and cultural facilities, are being built in Madagascar.  Moreover, it is investing in family planning programmes to transform a dependent population into an active and economically productive population, he said.  As such, education is a national priority.

He said that he was pleased that the France-Malagasy Joint Committee is working towards the implementation of General Assembly resolutions from 1979 and 1980 relating to the issue of des Iles Éparses.  “The Africa of tomorrow must be autonomous, independent and prosperous,” he concluded.